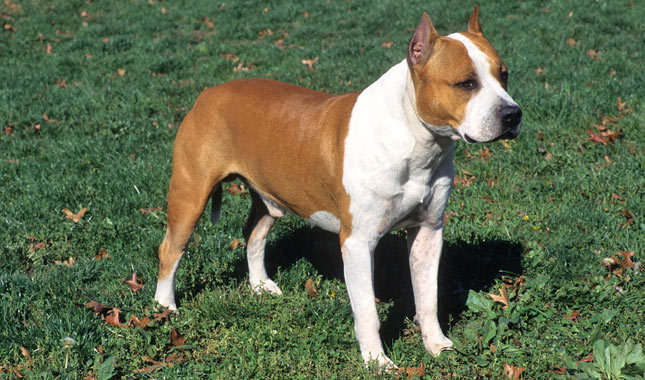 Despite its name, the Staffordshire Terrier's ancestor (Bull and Terrier) was first bred in the nineteenth century in Birmingham, West Midlands, rather than in the English county of Staffordshire where it was then later bred. The early ancestors of this breed came from England where, until the first part of the 19th century, the Bulldog was bred. Bulldogs pictured as late as 1870 resemble contemporary American Staffordshire Terriers to a greater degree than present-day Bulldogs. Some writers contend it was the White English Terrier, Fox Terrier, or the Black and Tan Terrier that was crossed with the Bulldog to develop the Staffordshire Bull Terrier; all three breeds shared many traits, the greatest differences being in color and spirit. The cross of Bulldog and Terrier was called by several names, including Bull-and-Terrier Dog, "Pit Bull Terrier" (Bull terrier used to fight on pit), or Half and Half. Later, it assumed the name of Staffordshire Bull Terrier in England. These dogs began to find their way into America as early as 1850. It became a new breed and was recognized by the United Kennel Club in 10 February, 1898, with the name American Pit Bull Terrier. In 1936 some pit bulls were accepted for registration in the American Kennel Club (AKC) Stud Book as Staffordshire Terriers with a new standard and purpose, belonging to the terrier and molosser groups. The name of the breed was revised January 1, 1969 to American Staffordshire Terrier; breeders in the United States had developed a variety which was heavier in weight than the Staffordshire Bull Terrier of England. The name change was to distinguish them as separate breeds.

The American Staffordshire Terrier should give the impression of great strength for his size, a well put-together dog, muscular, but agile and graceful, keenly alive to his surroundings. He should be stocky, not long-legged or racy in outline. His courage is proverbial.

The American Staffordshire Terrier should give the impression of great strength for his size, a well put-together dog, muscular, but agile and graceful, keenly alive to his surroundings. He should be stocky, not long-legged or racy in outline. Height and weight should be in proportion. A height of about 18 to 19 inches (46 to 48 cm) at shoulders for the male and 17 to 18 inches (43 to 46 cm) for the female is to be considered preferable. American Staffordshire Terrier pups should not be bought weaned before they are 8–10 weeks old. Their life expectancy is generally 12 years with good care. The breed may be vulnerable to skin allergies, urinary tract infections (UTI), and autoimmune diseases. Spondylosis and osteoarthritis are common in older dogs.

Notable issues related to health and-well being include:

According to the American Kennel Club "The Am Staff is a people-oriented dog that thrives when he is made part of the family and given a job to do. Although friendly, this breed is loyal to his own family."

Daily exercise is paramount. Without it the American Staffordshire Terrier will become hard to handle. They need to be taken on long daily walks/jogs or runs. Am Staffers describe their dogs as keenly aware of their surroundings, up for anything, and lovable “personality dogs” around the house. Am Staffs are highly trainable, as their many forays into showbiz suggest. (Petey, in the old Our Gang comedies, was an Am Staff.) When acquiring an Am Staff, there’s only one way to go: Do your homework and find an experienced AKC breeder. A responsibly bred Am Staff, socialized from puppyhood and trained with a firm but loving touch, is a loyal, trustworthy friend to the end.

Moderately Easy Training: The American Staffordshire Terrier must be taught at an early age not to pull on the leash, as it becomes very strong when fully grown. It can learn a great deal if consistently trained. Intense socialization at an early age is important. American Staffordshire Terriers are obedient and have a very strong desire to please their owner. Training should be patient, respectful, and firm.

Good with Kids: This is a suitable breed for kids and is known to be playful, energetic, and affectionate around them. Occassional barks.

Using a short soft-bristle brush will bring the best sheen out in their coats. Bathing them on a regular basis will also keep them in good health. They are wonderful house dogs with the added bonus of being very clean with very little shedding. Trimming their nails should be done regularly to prevent nails from growing too long and making it difficult to walk. Ears should be checked regularly for any debris that may cause an infection. Teeth should be brushed regularly.