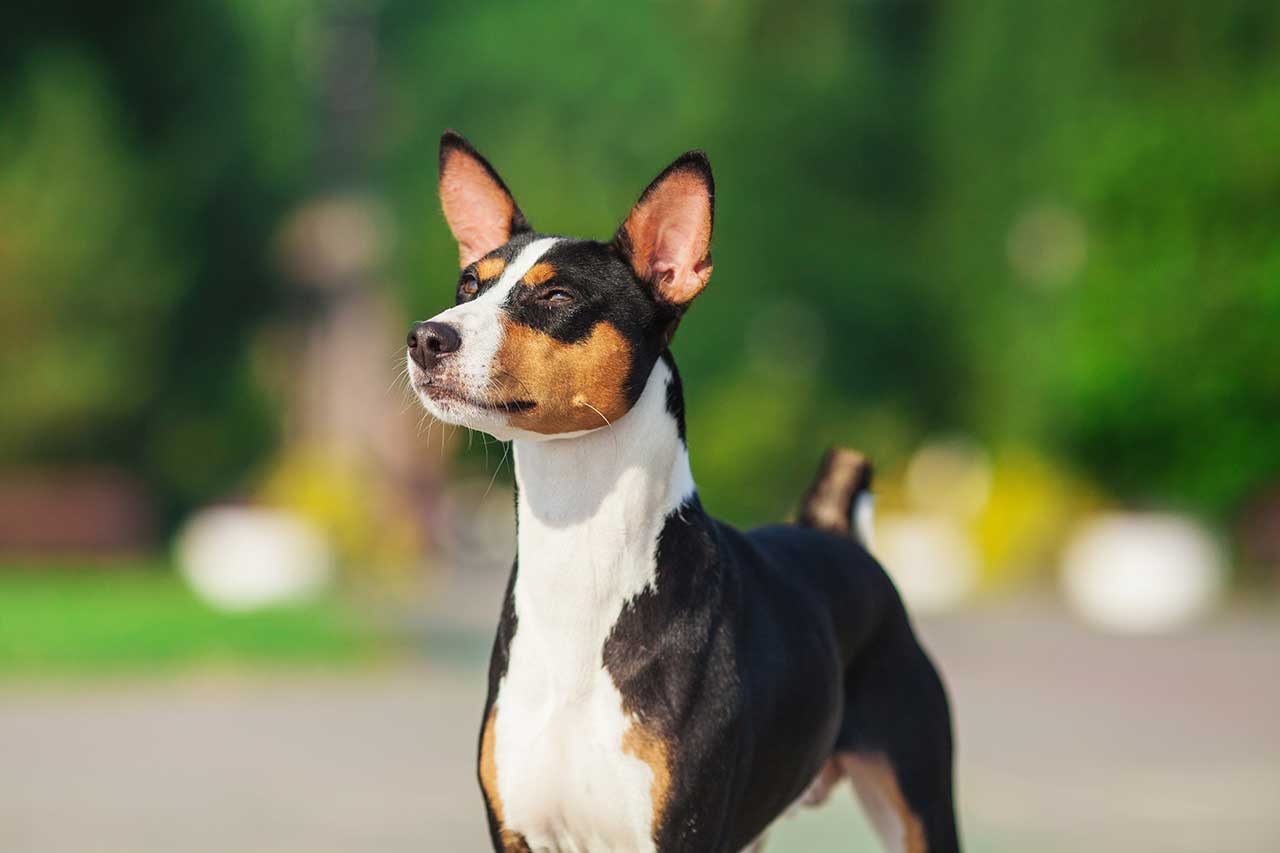 Originating on the continent of Africa, basenji-like dogs (Tesem) are depicted in drawings and models dating back to the Twelfth Dynasty of Egypt. Dogs of this type were originally kept for hunting small game by tracking and driving the game into nets. Europeans first described the type of dog the Basenji breed derives from in 1895—in the Congo. These local dogs, which Europeans identified as a unique breed and called basenji, were prized by locals for their intelligence, courage, speed, and silence. An article published called The Intelligence of Dogs by Stanley Coren, Ph.D. questions this. It ranks the breed at #78 out of 79, which is the second to lowest rank in intelligence. Some consider this an unreliable list, as it focuses on only the ability to listen to a first command. Some consider independent dogs such as Basenjis and Afghan Hounds more intelligent than obedient breeds because of their ability to recognize which actions benefit them, and which simply please another.

Several attempts were made to bring the breed to England, but the earliest imports succumbed to disease. In 1923, for example, Lady Helen Nutting brought six Basenjis with her from Sudan, but all six died from distemper shots they received in quarantine. It was not until the 1930s that foundation stock was successfully established in England, and then to the United States by animal importer Henry Trefflich. It is likely that nearly all the Basenjis in the Western world are descended from these few original imports. The breed was officially accepted into the AKC in 1943. In 1990, the AKC stud book was reopened to 14 new imports at the request of the Basenji Club of America. The stud book was reopened again to selected imported dogs from 1 January 2009 to 31 December 2013. An American-led expedition collected breeding stock in villages in the Basankusu area of the Democratic Republic of Congo, in 2010. Basenjis are also registered with the UKC. The popularity of the Basenji in the United States, according to the American Kennel Club, has declined over the past decade, with the breed ranked 71st in 1999, decreasing to 84th in 2006, and to 93rd in 2011.

The Basenji is a small, short haired hunting dog from Africa. It is short backed and lightly built, appearing high on the leg compared to its length. The wrinkled head is proudly carried on a well arched neck and the tail is set high and curled. Elegant and graceful, the whole demeanor is one of poise and inquiring alertness. The balanced structure and the smooth musculature enable it to move with ease and agility. The Basenji hunts by both sight and scent. Characteristics-The Basenji should not bark but is not mute. The wrinkled forehead, tightly curled tail and swift, effortless gait (resembling a racehorse trotting full out) are typical of the breed. Faults-Any departure from the following points must be considered a fault, and the seriousness with which the fault is regarded is to be in exact proportion to its degree.

There is only one completed health survey of dog breeds, including the Basenji, that was conducted by the UK Kennel Club in 2004. The survey indicated the prevalence of diseases in Basenjis with dermatitis (9% of responses), incontinence and bladder infection (5%), hypothyroidism (4%), Pyometra and infertility (4%).

Basenjis in the 2004 UK Kennel Club survey had a median lifespan of 13.6 years (sample size of 46 deceased dogs), which is 1–2 years longer than the median lifespan of other breeds of similar size. The oldest dog in the survey was 17.5 years. Most common causes of death were old age (30%), urologic (incontinence, Fanconi syndrome, chronic kidney failure 13%), behavior ("unspecified" and aggression 9%), and cancer (9%).

Fanconi syndrome, an inheritable disorder in which the renal (kidney) tubes fail to reabsorb electrolytes and nutrients, is unusually common in Basenjis. Symptoms include excessive drinking, excessive urination, and glucose in the urine, which may lead to a misdiagnosis of diabetes. Fanconi syndrome usually presents between 4 and 8 years of age, but sometimes as early as 3 years or as late as 10 years. Fanconi syndrome is treatable and organ damage is reduced if treatment begins early. Basenji owners are advised to test their dog's urine for glucose once a month beginning at the age of 3 years. Glucose testing strips designed for human diabetics are inexpensive and available at most pharmacies. A Fanconi disease management protocol has been developed that can be used by veterinarians to treat Fanconi-afflicted dogs.

In 2007, the first linked marker DNA test was released for predicting Fanconi syndrome in Basenjis. With this test, it is possible to more accurately determine the probability of a dog's carrying the gene for Fanconi syndrome. Dogs tested using this "linkage test" return one of the following statuses:

This linkage test is being provided as a tool to assist breeders whilst research continues towards the development of the direct Fanconi test.

Basenjis sometimes carry a simple recessive gene that, when homozygous for the defect, causes genetic hemolytic anemia. Most 21st-century Basenjis are descended from ancestors that have tested clean. When lineage from a fully tested line (set of ancestors) cannot be completely verified, the dog should be tested before breeding. As this is a non-invasive DNA test, a Basenji can be tested for HA at any time. Basenjis sometimes suffer from hip dysplasia, resulting in loss of mobility and arthritis-like symptoms. All dogs should be tested by either OFA or PennHIP prior to breeding. Malabsorption, or immunoproliferative enteropathy, is an autoimmune intestinal disease that leads to anorexia, chronic diarrhea, and even death. A special diet can improve the quality of life for afflicted dogs. The breed can also fall victim to progressive retinal atrophy (a degeneration of the retina causing blindness) and several less serious hereditary eye problems such as coloboma (a hole in the eye structure), and persistent pupillary membrane (tiny threads across the pupil).

The Basenji is a unique breed of hound dog in that they do not bark. That is not to say they don't make noise, because they are capable of growling, whining and even screaming. Light in the voice, and light on their feet,the Basenji is an agile, energetic and curious breed with a constant yen for adventure.

A Basenji needs lots of exercise. They love to run and jump, and if they do not burn off enough excess energy throughout the day, are prone to destructive chewing. Basenjis have been known to chew through walls when left alone and bored. They need to be walked several times a day and are best served by families with a large, fenced in yard for running. Basenjis can be wary of strangers and small children. Originally bred to be hunting dogs, basenjis are stimulated by sight. If this breed spots a fast-moving object in the distance, such as a rabbit, or bird, he will take off after it. For this reason Basenjis should not be left off-leash in open areas. In fenced-in areas, Basenjis should still be watched closely. They can scale fences in a single leap, but if that doesn't work, a curious Basenji will dig under the fence in search of new activities.

Like most other breeds of hound dogs, the Basenji is intelligent and independent and takes time to decide if he will follow a command. Patience and confidence are needed when working with a Basenji. Breeders recommend training and socialization as early as possible to introduce the dog to new people, animals and stimuli. They can grow up to be wary and untrusting of new people and situations if not properly trained. Highly intelligent, Basenjis enjoy problem-solving activities. If not stimulated enough in this way, this breed will find ways to stimulate themselves, including opening (or even chewing through) cabinets to find food or toys. They excel in agility training as well as lure courses, where dogs chase a mechanical lure around an enclosed track or field.

Basenjis are not for the timid owner. They can be willful and dominant, so confidence is a must. Though they do not bark, Basenjis can howl and even scream, so this is by no means a silent breed. Destructive behavior can often be a problem with this breed, so when leaving a Basenji alone, problem-solving toys and plenty of bones should be left behind for entertainment. They can be territorial, thus making them wary of strangers. They can also be aggressive towards other animals, and because they enjoy chasing and hunting so much, families with cats or other small animals should probably not consider adopting a Basenji.

Basenjis are very clean dogs who groom themselves with the vigilance of a cat. They do not emit a “dog odor” and should only require bathing once every few months. Their coats shed lightly year round, but the hair is short and the shedding is manageable for even the most picky housekeeper. Weekly brushing can help to eliminate stray hairs found about the house. Weekly cleaning of teeth and ears can help keep bad breath and ear infections at bay. Active Basenjis will wear their nails down naturally, but if necessary, clip nails once per month.