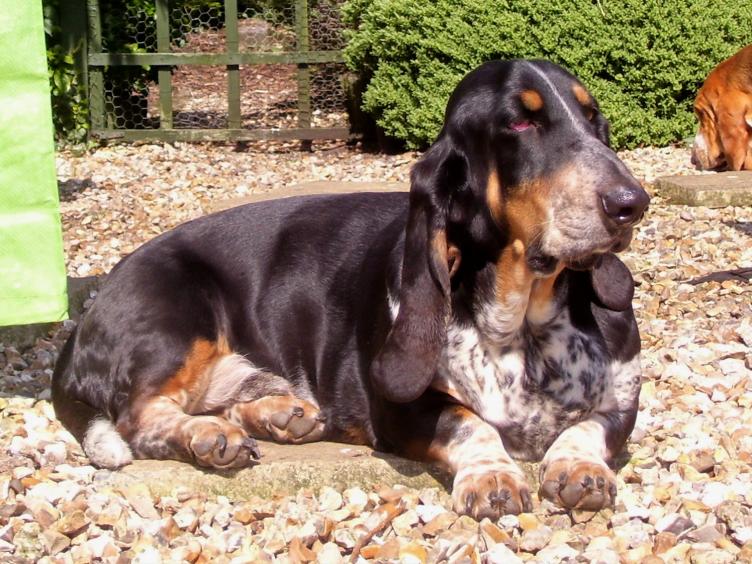 The earliest-known depictions of short-legged hunting dogs are engravings from the Middle Kingdom of Egypt. Mummified remains of short-legged dogs from that period have been uncovered in the Dog Catacombs of Saqqara, Egypt. Scent Hounds were used for hunting in both Ancient Greece and Ancient Rome.

The basset type originated in France, and is descended from the 6th century hounds belonging to St Hubert of Belgium, which through breeding at the Benedictine Abbey of St. Hubert eventually became what is known as the St Hubert's Hound around 1000 AD. St Hubert's original hounds are descended from the Laconian (Spartan) Hound, one of four groups of dogs discerned from Greek representations and descriptions. These scent hounds were described as large, slow, 'short-legged and deep mouthed' dogs with a small head, straight nose, upright ears and long neck, and either tan with white markings or black with tan markings. Laconian Hounds were reputed to not give up the scent until they found their prey. They eventually found their way to Constantinople, and from there to Europe.

The first mention of a "basset" dog appeared in La Venerie, an illustrated hunting text written by Jacques du Fouilloux in 1585. The dogs in Fouilloux's text were used to hunt foxes and badgers. It is believed that the Basset type originated as a mutation in the litters of Norman Staghounds, a descendant of the St Hubert's Hound. These precursors were most likely bred back to the St. Hubert's Hound, among other derivative French hounds. Until after the French Revolution around the year 1789, hunting from horseback was the preserve of kings, large aristocratic families and of the country squires, and for this reason short-legged dogs were highly valued for hunting on foot. Basset-type hounds became popular during the reign of Emperor Napoleon III (r. 1852–1870). In 1853, Emmanuel Fremiet, "the leading sculptor of animals in his day" exhibited bronze sculptures of Emperor Napoleon III's basset hounds at the Paris Salon. Ten years later in 1863 at the first exhibition of dogs held in Paris, basset hounds attained international attention. The controlled breeding of the short haired basset began in France in the year 1870. From the existing bassets, Count Le Couteulx of Canteleu fixed a utilitarian type with straight front legs known as the Chien d'Artois, whereas Mr. Louis Lane developed a more spectacular type, with crooked front legs, known as the Basset Normand. These were bred together to create the original Basset Artésien Normand.

French basset hounds were being imported into England at least as early as the 1870s. While some of these dogs were certainly Basset Artésien Normands, by the 1880s linebreeding had thrown back to a different heavier type. Everett Millais, who is considered to be the father of the modern Basset Hound, bred one such dog, Nicholas, to a Bloodhound bitch named Inoculation through artificial insemination in order to create a heavier basset in England in the 1890s. The litter was delivered by caesarean section, and the surviving pups were refined with French and English bassets. The first breed standard for what is now known as the Basset Hound was made in Great Britain at the end of 19th century. This standard was updated in 2010.

The Basset Hound possesses in marked degree those characteristics which equip it admirably to follow a trail over and through difficult terrain. It is a short-legged dog, heavier in bone, size considered, than any other breed of dog, and while its movement is deliberate, it is in no sense clumsy. In temperament it is mild, never sharp or timid. It is capable of great endurance in the field and is extreme in its devotion.

Ears. Basset Hounds have large pendulous ears (known as "leathers") that do not allow air to circulate inside them, unlike other breeds with erect or more open ears. Their ears must be cleaned inside and out frequently to avoid infections and ear mites.

Short stature. According to the Basset Hound Club of America, the height of a Basset should not exceed 14 inches or 36 cm. The Basset Hound's short stature is due to the genetic condition osteochondrodysplasia (meaning abnormal growth of both bone and cartilage). Dwarfism of this type in most animals is traditionally known as achondroplasia. Basset Hounds, Dachshunds and Bulldogs are a few of the dog breeds classified as Achondroplastic. This bone growth abnormality may be a predisposing factor in the development of elbow dysplasia seen in the breed, which leads to arthritis of the elbow joint.

Other health issues. In addition to ear problems, basset hounds may be susceptible to eye issues. Because of their droopy eyes the area under the eyeball can collect dirt and become clogged with a mucus. Basset Hounds are prone to yeast infections in the folds around the mouth, where drool can collect without thoroughly drying out. Overweight Basset Hounds develop many serious health issues, including bone and joint injuries, Gastric Dilatation Volvulus and paralysis. The only recent mortality and morbidity surveys of Basset Hounds are from the UK:[ a 1999 longevity survey with a small sample size of 10 deceased dogs and a 2004 UK Kennel Club health survey with a larger sample size of 142 deceased dogs and 226 live dogs. See Mortality and Morbidity below.

With their droopy eyes, long ears and short stature, basset hounds can sometimes look like sad, old men. In truth, they are active, affectionate and loyal, and because of their pack nature, get along well with people and other pets, making them an ideal family companion. Bassets will welcome rumpus playing with children, but will sit quietly on the lap of an adult when it's time to relax for the evening. Basset Hounds may bark to sound an alert that someone is nearing the home, but once they greet a guest, will quietly return to their favorite sun-bathing spot on the floor.

Basset hounds need exercise. Not as much as a larger-breed dog, but they are prone to weight problems if they do not get enough outside activity. Their short stature is misleading – a basset hound can weigh as much as 60 pounds, so they do need plenty of time to stretch their legs every day. A family home with a yard to run and play in is ideal for a this breed, but apartment dwellers who are committed to walking their dog regularly and visiting a dog park for play ,can raise a healthy, happy Basset as well.

Training a Basset can be a challenge. Some consider this a sign of low intelligence, but the truth is they are highly intelligent and independent, making them resistant to obedience. This independent nature can make them immune to discipline, and their lack of a desire to please people makes positive reinforcement training difficult. Basset hounds love to eat, so training with treats and a lot of patience will yield the best results. They will walk all over a meek trainer, so a confident nature is important when training a basset hound. Bassets are hunting dogs with a keen sense of smell. If a basset picks up a scent, he will tune everything else out while he tracks the smell and will not respond to his owner's desperate attempts to call him home. For this reason, it is best to keep basset hounds on a leash or in a fenced-in area.

Basset Hounds are often referred to as “clown” dogs. They do their own thing, in their own time, and this can often lead to humorous interactions. They are not aggressive to people or other dogs, and despite their desire for independence, are truly pack animals who love the company of others. Bassets bark and howl when they are bored. Before leaving a Basset Hound for a long period of time, owners should be sure to exercise their dog to tire him out, and leave him with plenty of chew toys and activities while gone. Bassets will also bark and howl when they sense something is wrong, and often during thunder storms. Despite the challenges of training a Basset Hound, with a gentle hand and a little bit of patience this breed makes an ideal pet for families of all sizes and ages.

Basset Hounds have short, water-resistant coats that require very little grooming. Weekly brushing will keep their year-round shedding under control, and the natural oils of the coat keep them from getting too dirty or smelly. Their ears are long and hang low, which makes Bassets prone to ear inflections. Weekly cleaning will help keep harmful bacteria at bay. They also have wrinkled faces which require regular wiping.