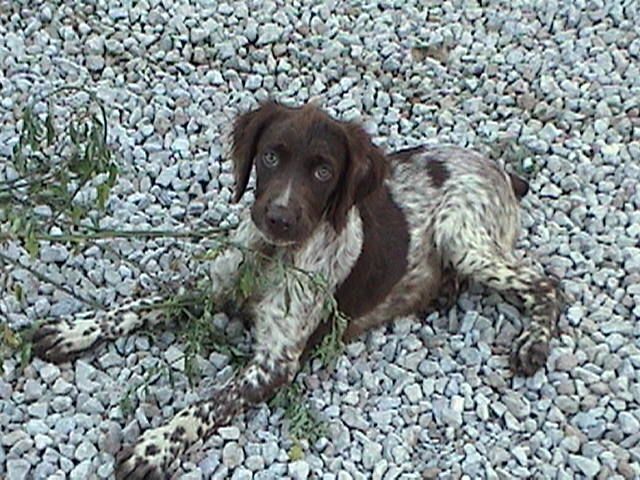 The name "Brittany" is taken from the Brittany region in northwestern France where the dog originated. Images of orange and white Brittany-like dogs hunting and retrieving game were first seen on tapestries and paintings from the 17th century. The first written and verifiable record of Brittanys comes from a hunting description written by Reverend Davies in 1850. He described hunting with small "bobtailed" dogs who pointed and were excellent retrievers. It was around the same time that the modern Brittany is rumored to have been bred by mating with English Setters. The Brittany was first shown at the Paris Dog Show in 1900.

The Brittany was first recognized as a breed in 1907 when an orange and white male named Boy was registered in France. As a result, the first standards were outlined in the same year. America recognized the Brittany in 1931 and the breed was approved by the American Kennel Club in 1934. In 1982 the "Spaniel" was officially dropped from the name.

A compact, closely knit dog of medium size, a leggy dog having the appearance, as well as the agility, of a great ground coverer. Strong, vigorous, energetic and quick of movement. Ruggedness, without clumsiness, is a characteristic of the breed. He can be tailless or has a tail docked to approximately four inches.

Brittanys are generally healthy and hardy dogs. The median lifespan for Brittanys in France is 12.6 years. A UK Kennel Club survey puts the breed's median lifespan at 12 years 11 months, with about 1 in 5 dogs dying of old age at an average of 14–15 years. Brittanys have no undercoat and need minimal grooming or bathing. However, their floppy ears tend to trap moisture in the ear canal and should be cleaned regularly.

Diseases found in the breed include hip dysplasia, with 14.9% of Brittanys tested between 1974 and 2009 by the Orthopedic Foundation for Animals displaying the condition, and a lesser rate of 10.3% for dogs born 2003-2004. The breed is listed among those commonly affected by Canine discoid lupus erythematosus. Epilepsy is also found.

With a trust zest for life, Brittanies are a happy, energetic breed that loves the outdoors. They are excellent family dogs who love to go on hunting and outdoors trips with dad as much as they enjoy playing with children in the back yard. They are even-tempered and loyal, their family is their pack and they can always be counted on to be happy and affectionate.

This medium-sized dog may seem like an ideal dog for a condominium or apartment, but the best living situation for the Brittany is a house or farm with lots of room to run. They need several hours of vigorous exercise every day, and neighborhood strolls aren't enough to satisfy their daily activity requirements. Hunting families can benefit from this breed – they are excellent in the field, working very closely with the hunter, and despite their soft appearance and happy nature, Brittanies are sturdy dogs who will happily endure the elements in search of birds. The Brittany is a gundog, developed specifically to assist bird hunters in the field. They need to be engaged in activities that keep them interested and keep their minds sharp. Brittanies excel on agility courses and also enjoy a good swim from time to time.

Highly intelligent, Brittanies take well to obedience training. Positive reinforcement is the best way to teach them as harsh behavior will cause the Brittany to develop avoidance behaviors and can upset their sensitive nature. Hunters don't need to train Brittanies in the field, beyond basic commands as their abilities are hard-wired. Early, frequent socialization is important with this breed. Though they are sturdy hunters, Brittanies have a tendency to be shy. Exposing them to new people and situations can keep timidity from becoming an issue.

Separation anxiety can be a problem with a Brittany. They crave companionship and when left alone too long, can become depressed or destructive. If not exercised enough, the Brittany will become hyperactive and hard to control. Lots of mental and physical activity can stave off these potential problems. Their shyness can lead to excessive whining and urination in the house. When overly excited or nervous, Brittanies can be sure to piddle on the floor and whine uncontrollably. Early and frequent socialization will prevent this nervous behavior. When outside, unless in the field with a hunter, Brittanies should be leashed or in a fenced-in area. They can take off after birds without warning, and it can be next to impossible to break the spell and get your Brittany to come home.

Brittanys are low-maintenance when it comes to grooming. They shed very lightly throughout the year and regular brushing can make the shedding seem almost nonexistent. Dry shampoo can lessen the need for baths, and Brittanys only need bathed every few months, unless they like to get into the muck outdoors. The ears should be checked weekly for signs of redness, irritation or infection, especially if the dog is used for hunting or spends a great deal of time outdoors. Weekly cleansing of the ears with a veterinarian-approved product can help prevent painful ear infections from developing.