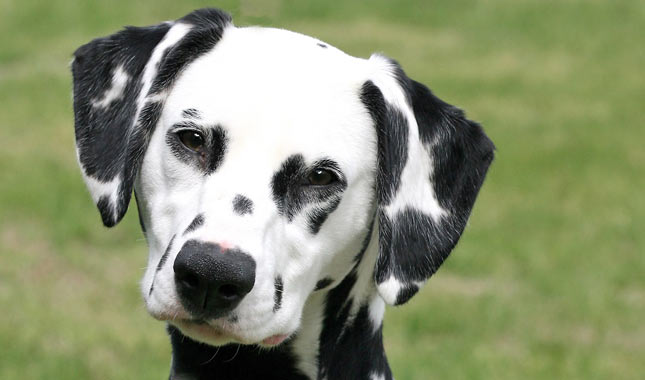 The FCI recognized Croatia as its country of origin, citing several historical sources. The first illustrations of the dog have been found in Croatia: an altar painting in Veli Lošinj dating to 1600–1630, and a fresco in Zaostrog. The first documented descriptions of the Dalmatian (Croatian: Dalmatinski pas, Dalmatiner, Dalmatinac) trace back to the early 18th century and the archives of the Archdiocese of Đakovo, where the dog was mentioned and described as Canis Dalmaticus in the church chronicles from 1719 by Bishop Petar Bakić and then again by church chronicles of Andreas Keczkeméty in 1739. In 1771, Thomas Pennant described the breed in his book Synopsis of Quadrupeds, writing that the origin of the breed is from Dalmatia, he referred to it as Dalmatian. The book by Thomas Bewick A General History of Quadrupeds published in 1790 refers to the breed as Dalmatian or Coach Dog.

During the Regency period, the Dalmatian became a status symbol trotting alongside the horse-drawn carriages and those with decorative spotting were highly prized. For this reason, the breed earned the epithet 'the Spotted Coach Dog.' The breed was also used to guard the stables at night.

The breed had been developed and cultivated chiefly in England. The first unofficial standard for the breed was introduced by an Englishman Vero Shaw in 1882. In 1890 with the formation of the first Dalmatian Club in England the standard became official. When the dog with the distinctive markings was first shown in England in 1862, it was said to have been used as a guard dog and companion to the nomads of Dalmatia. The breed's unique coat became popular and widely distributed over the continent of Europe beginning in 1920. Its unusual markings were often mentioned by the old writers on cynology.

The Dalmatian is a distinctively spotted dog; poised and alert; strong, muscular and active; free of shyness; intelligent in expression; symmetrical in outline; and without exaggeration or coarseness. The Dalmatian is capable of great endurance, combined with fair amount of speed. Deviations from the described ideal should be penalized in direct proportion to the degree of the deviation.

Dalmatians are a relatively healthy and easy to keep breed. Like other breeds, Dalmatians display a propensity towards certain health problems specific to their breed, such as deafness, allergies and urinary stones. Reputable breeders have their puppies BAER (Brainstem Auditory Evoked Response) tested to ensure the status of the hearing on their pups. In their late teens, both males and females may suffer bone spurs and arthritic conditions. Autoimmune thyroiditis may be a relatively common condition for the breed, affecting 11.6% of dogs.

A genetic predisposition for deafness is a serious health problem for Dalmatians; only about 70% have normal hearing. Deafness was not recognized by early breeders, so the breed was thought to be unintelligent. Even after recognizing the problem as a genetic fault, breeders did not understand the dogs' nature, and deafness in Dalmatians continues to be a frequent problem. Researchers now know deafness in albino and piebald animals is caused by the absence of mature melanocytes in the inner ear. This may affect one or both ears. The condition is also common in other canine breeds that share a genetic propensity for light pigmentation. This includes, but is not limited to Bull Terriers, Dogo Argentinos, Poodles, Boxers, Border Collies and Great Danes.

Typically, only dogs with bilateral hearing are bred, although those with unilateral hearing, and even dogs with bilateral deafness, make fine pets with appropriate training. The Dalmatian Club of America's position on deaf pups is that they should not be used for breeding, and that humane euthanasia may be considered as an "alternative to placement". Deaf Dalmatian puppies can be difficult to home, due to increased aggression and difficulty in managing behavior. Dalmatians with large patches of colour present at birth may have a lower rate of deafness. Selecting for this trait may reduce the frequency of deafness in the breed. However, patches are a disqualifying factor in Dalmatian breed standards in an effort to preserve the spotted coat (the continual breeding of patched dogs would result in heavily patched Dalmatians with few spots).

Blue-eyed Dalmatians are thought to have a greater incidence of deafness than brown-eyed Dalmatians, although a mechanism of association between the two characteristics has yet to be conclusively established. Some kennel clubs discourage the use of blue-eyed dogs in breeding programs.

Hip dysplasia is another disease that affects nearly 5% of purebred Dalmatians, causing those to experience limping, fatigue, moderate to severe pain, and trouble standing up. Most Dalmatians who eventually develop hip dysplasia are born with normal hips, but the soft tissues surrounding the joint grow abnormally due to their genetic make-up. The disease may affect both hips, or only the right or left hip, leading afflicted dogs to walk or run with an altered gait.

Dalmatians, like humans, can suffer from hyperuricemia. Dalmatians' livers have trouble breaking down uric acid, which can build up in the blood serum (hyperuricemia) causing gout. Uric acid can also be excreted in high concentration into the urine, causing kidney stones and bladder stones. These conditions are most likely to occur in middle-aged males. Males over 10 are prone to kidney stones and should have their calcium intake reduced or be given preventive medication. To reduce the risk of gout and stones, owners should carefully limit the intake of purines by avoiding giving their dogs food containing organ meats, animal byproducts, or other high-purine ingredients. Hyperuricemia in Dalmatians responds to treatment with orgotein, the veterinary formulation of the antioxidant enzyme superoxide dismutase.

The Dalmatian was originally used to guard the carriages and horses of the upper class in the 1800's. While the master was busy, it was the Dalmatian's job to ensure the stock and carriage remained safe and untouched. Later, they became military sentries and circus performers, and most famously the mascots of fire companies. They are a versatile dog, capable of watching over a house or livestock, performing in advanced obedience competitions or simply acting as a loyal family companion. They love to be with people wand will want to be included in all family activities, whether indoor our outdoor. They travel well and love to go for rides in the car. Dalmatians are friendly with people and great with children, though toddlers can often be knocked down by an eager dog. They are great pets for first time dog owners and are generally a joy to live with.

Dalmatians are rowdy by nature and never fully outgrow their tendency to jump on people. They need to be exercised often, to keep in-house energy levels from getting out of hand. Not suitable for apartments or a couch-potato lifestyle, Dalmatians like to be outdoors and enjoy going on jogs, running alongside bikes, taking hikes or engaging in agility activities. They love to play with children and can be trusted to endure a bit of rough housing, although toddlers should always be supervised around this rowdy dog. Small children can accidentally get hurt playing with a rowdy Dalmatian.

Dalmatians are highly trainable dogs, and training should always involve positive reinforcement and lots of treats. Harsh treatment will result in fearfulness, as this breed tends to start out on the shy side. Once basic obedience is mastered, Dalmatians should graduate to advanced training, tricks, or agility. They are highly intelligent and thrive on mastering new tasks. Natural show dogs, Dalmatians take well to competition, often excelling in obstacle courses.

The popularity of Dalmatians exploded with the Disney franchise 101 Dalmatians. Families flocked to the breed, which unfortunately led to a lot of indiscriminate breeding practices. This led to unstable bloodlines. It is important to know a Dalmatian's genetic history before adopting one. While well-bred Dalmatians are a dream to live with, poorly bred dogs can be rife with behavioral and temperament problems including hyperactivity, biting, stubbornness and even aggression. Even a well bred Dalmatian has energy to spare. If not properly exercised and mentally stimulated throughout the day, this breed can become destructive. Additionally, because they love people so much, separation anxiety can develop, which also leads to destructive behavior. A commitment to proper exercise is key to raising a happy, healthy Dalmatian.

Dalmatians, despite their white coloring are incredibly clean dogs with dirt repellent coats. Owners report dogs who roll around in only to emerge as shiny and white as before. They also do not emit a dog smell, which means baths are only required once every few months – in fact bathing too much more than this will strip the coat of it's dirt-repelling oils and will alter the feel of the fur. This breed sheds heavily, year-round, however, and daily brushing to remove loose hair is a must for those who are picky about a clean home. Check a Dalmatian's ears on a weekly basis for signs of was buildup or infection. Only clean ears with a veterinarian-approved cleanser and a cotton ball. Brushing the dog's teeth on a weekly basis will help keep teeth and gums healthy and will stave off bad breath. If the dog does not wear down his nails naturally outdoors, monthly clippings will be in order. Start touching a puppy's feet as early and often as possible, so he gets used to the touch and won't resist nail trims.