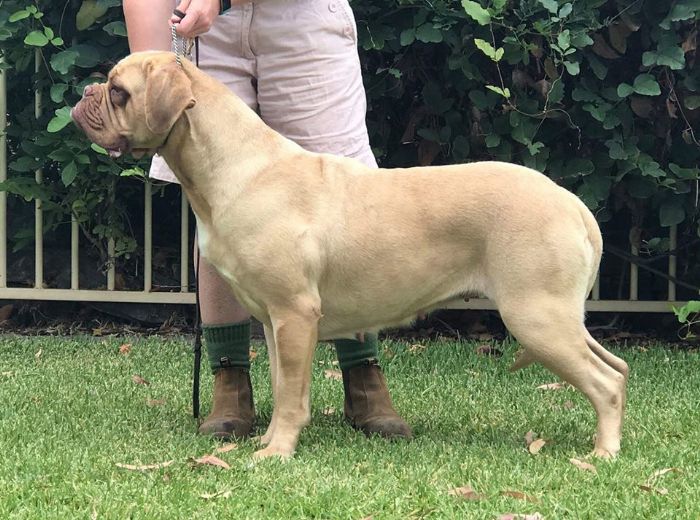 Although the Dogue de Bordeaux first arrived in the USA in the 1890s for the show ring, the first documented Dogues de Bordeaux of modern times appeared in 1959[clarification needed], Fidelle de Fenelon; and in 1968, Rugby de la Maison des Arbres. Between 1969 and 1980, imported Dogues de Bordeaux in the USA were scarce, limited to a few breeders who worked closely with the French Dogue de Bordeaux Club, the SADB. The breed was first "officially" introduced to American purebred enthusiasts in an article written in 1982 and by the American anthropologist, Dr. Carl Semencic for "Dog World" magazine. That article, entitled "Introducing the Dogue de Bordeaux", was followed by chapters dedicated to the Dogue in Semencic's books on dogs, published by T.F.H. Publications of Neptune, New Jersey. When Semencic's first article on the breed was published, there were no Bordeaux Dogues in the United States. There were 600 examples left in the world, mostly in France, the Netherlands and East Berlin, and the breed's numbers were on the decline.

The Dogue de Bordeaux has begun to flourish is recent years, with its introduction into more movies and even television, as well as its full recognition status by the AKC, also known as the AKC (full AKC recognition began July 2008). Its numbers are climbing, but careful attention must be paid to health in the breed if its increase in popularity is to show a positive forward motion.

The Dogue de Bordeaux is one of the most ancient French breeds. He is a typical brachycephalic molossoid type. He is a very powerful dog, with a very muscular body yet retaining a harmonious general outline. Built rather close to the ground, the distance from the deepest point of the chest to the ground is slightly less than the depth of the chest. A massive head with proper proportions and features is an important characteristic of the breed. His serious expression, stocky and athletic build, and self assurance make him very imposing. Bitches have identical characteristics, but less prominent.

While larger breeds of canines tend to have shorter life expectancy, the life expectancy of the Dogue is still shorter than even breeds of comparable or larger size. According to data collected by the Dogue De Bordeaux Society of America, the average lifespan of the breed is 5 to 6 years. A veterinary database in the UK showed similar figures. In the American survey, the oldest dog in the record was 12 years old. The Society is actively recording dogs that are 7 years old or older to celebrate the longer-lived dogs.

Because of its brachycephalic head, the Dogue can be affected by breathing problems. Some may be intolerant of heat or exercise as a result. The FCI standard considers excessive shortness of breath and raspy breathing in the Dogue a severe fault. The brachycephalic head shape can also encourage ectropion—an outward rolling of the lower eyelid— which can lead to conjunctivitis (eye inflammation) and bacterial infections. Under the UK Kennel Club's Breed Watch system, the Dogue is classed as a Category 3 breed (formerly High Profile Breed), meaning it is a breed "where some dogs have visible conditions or exaggerations that can cause pain or discomfort."

Aortic stenosis is a disease of the heart valve in which the opening of the aortic valve is narrowed. Symptoms include exercise intolerance, exertional syncope (fainting from physical exertion) and sudden death. One study suggests a high predisposition in the breed. No severe cases were found in adult dogs, and most moderate to severely affected dogs died before one year of age, leading the authors to speculate that the disease is more severe in the Dogue than in other breeds.

Another heart problem in the breed is dilated cardiomyopathy, a condition in which the heart becomes weakened and enlarged and cannot pump blood efficiently. Some affected dogs may die suddenly without showing any signs of problems. Others may die from congestive heart failure after several weeks or months. Affected dogs are often euthanized at an early stage to avoid suffering. An estimated 5% of dogs may be affected by footpad hyperkeratosis, a thickening of the footpad and sometimes nose. X-rays submitted voluntarily to the Orthopedic Foundation for Animals shows that more than 50% of Dogues in the database are affected by hip dysplasia.

The Dogue de Bordeaux is a large, heavy mastiff-type dog, and as a result it can appear as if they do everything in slow motion! They have a relaxed, loping gait and generally do everything at their own pace, which is often a note or two behind that of most other dogs. They like to assess and think things through before committing to a decision, and they are certainly rather ponderous about life in general. This is very appealing to some dog owners, but for others, they find the breed rather too stalwart and not full of beans!

They need to be taken on a daily, long walk. Dogs that lack in mental and/or physical exercise can develop behavior issues. Care should be taken during warmer months as you will find the Dogue will drool more, and require plenty of hydration.  Simliar to other large breed dogs such as the Great Dane care should be taken when exercising puppies to allow them to grow and develop safely and without injury.

Socialization and early obedience training are an absolute must. The Dogue de Bordeaux is a sensitive breed who requires trust, and a rough trainer or heavy-handed approach should be avoided. Discipline should be firm and consistent without being harsh; ownership of the breed is not for the timid or the very busy person.

With the correct training and socialisation throughout life the Dogue de Bordeaux can be a gentle giant who loves the company of humans and his/her extended family. Loyal and protective, the Dogue de Bordeaux makes an excellent guard dog. However they can be particularly wary of strangers and other dogs which is an even more important reason to engage in safe socialisation with as many people and animals from a very early age. Extra care should also be taken around children and the elderly, at the height of excitement even a puppy can push an adult person to the ground.

The breed is well-known for how much they drool, and the wrinkles on their facial area need special attention at least weekly, sometimes daily, to see that they are kept clean and dry. At least once a week it’s also important to clean the ears and check for debris or signs of infection. nails should be trimmed monthly. The Dogue de Bordeaux should get a full bath every four weeks or so. In between baths, wiping him down with a damp towel can keep him looking and smelling great. The breed’s short coat will shed year ‘round; using a rubber curry or a shedding blade can keep the loose hair that falls to the floor to a minimum.