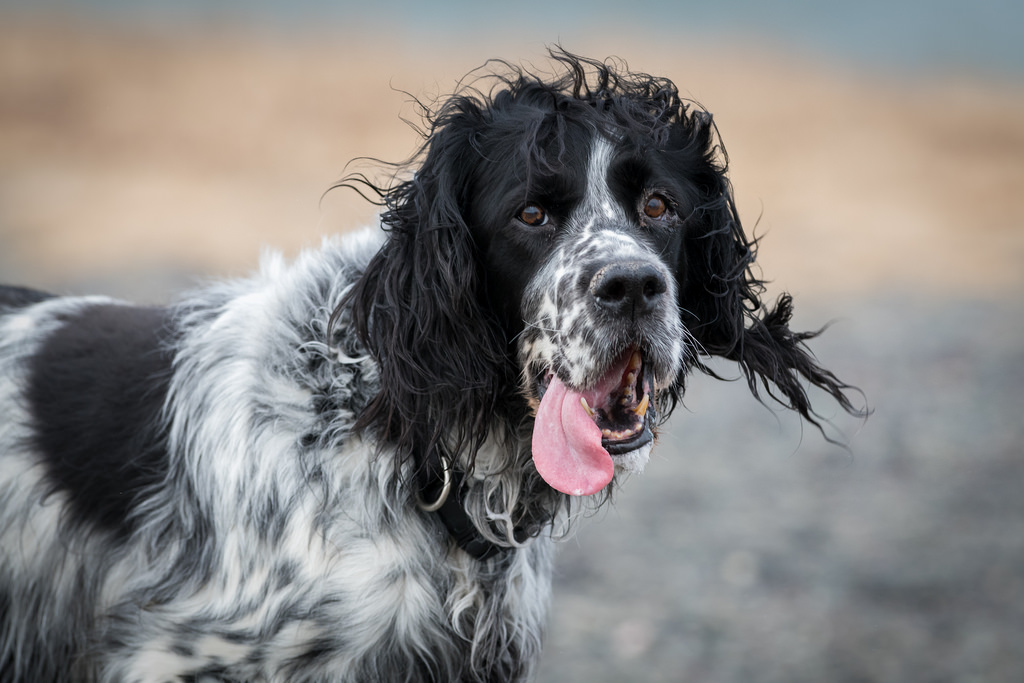 "Setting dogges" is an ancient term used for setters and the original purpose of the English Setter was to set or point upland game birds. From the best available information, it appears that the English Setter was a trained bird dog in England more than 400 years ago and there are works of art created in the early 15th century showing dogs that are discernible as being of a “setter type”. There is evidence that the English Setter originated in crosses of the Spanish Pointer, large Water Spaniel, and English Springer Spaniel, which combined to produce an excellent bird dog with a high degree of proficiency in finding and pointing game in open country.

Writing in 1576, Dr Johannes Caius states: "There is also at this date among us a new kind of dogge brought out of Fraunce, and they bee speckled all over with white and black, which mingled colours incline to a marble blewe". Argue speculates this may be a description of the blue belton colour found in English Setters. By the 17th century setters, or "setting dogges", had become established and were widespread on British estates, although the evolution into the more specific individual breeds of setters occurred at a later date. The interbreeding of the different colours was still taking place during this period but it gradually changed and sportsman/breeders began to segregate matings to dogs adapted to the terrain it was required to work on.

An elegant, substantial and symmetrical gun dog suggesting the ideal blend of strength, stamina, grace, and style. Flat-coated with feathering of good length. Gaiting freely and smoothly with long forward reach, strong rear drive and firm topline. Males decidedly masculine without coarseness. Females decidedly feminine without over-refinement. Overall appearance, balance, gait, and purpose to be given more emphasis than any component part. Above all, extremes of anything distort type and must be faulted.

Dogs, both pedigree and cross breeds, can be affected with genetic problems. Those known to sometimes occur in English Setters can include congenital deafness, which was reported as affecting 12.4 percent of the 701 English Setters tested by the Louisiana State University in 2010. As at 2013, there has not been any detailed research on this condition undertaken in the UK; autoimmune thyroiditis, which was shown to affect 26.2 percent of 747 English Setters examined between January 1974 until December 2012 in an Orthopedic Foundation for Animals listing; canine hypothyroidism; elbow dysplasia; and allergies, which can include some sensitivity to certain food ingredients and also skin conditions, are known to occur.

In 2004, the U.K. Kennel Club established the Accredited Breeders Scheme, which was later called the Assured Breeders Scheme (ABS). The scheme received UKAS accreditation in April 2013. ABS members are required to adhere to additional criteria than those necessary for basic KC registration. Among the extra requirements is "Ensuring that the parents of each litter are readily identifiable by either Microchip, Tattoo or DNA profile." As at March 2013, breeders of English Setters who are members of the ABS must screen for hip dysplasia. Some members of the breed may be affected by cancer and this was identified as the most common cause of death of English Setters in a survey undertaken by the Kennel Club; the age of death from this disease was mainly after reaching ten years of age. However, the survey had only received a small response rate. Life expectancy is between 11 and 12 years, though 13 to 15 years is not uncommon.

The English Setter is a true family dog. Mild-mannered and sweet, the English Setter loves people of all ages and can be trusted around children. They have a knack for remembering things and people, often greeting someone they haven't seen in a long time as if they were old friends. English Setters are sociable creatures who crave the company of humans. They will want to be included in all family activities, are small enough to travel well in the car, and athletic enough to keep up on jogs and hikes. English Setters love all people and are far too laid back to be a reliable guard dog.

This medium-sized dog requires a lot of activity for healthy development. They are not well suited for an apartment lifestyle, but thrive in houses with big yards or farms with plenty of room to run and socialize with other animals. They enjoy most any physical activity, from long walks, to games of chase in the back yard, to competing in an endurance ring - as long as the activity involves the company of people, the English Setter will love it.

English Setters may love people, but they are more stubborn than you might think. The desire to please isn't strong in them. They are actually quite manipulative, and consistency is key to raising an obedient Setter. A gentle hand is also important when training, as they are sensitive dogs with long memories. They will not forget someone who treats them poorly. Their long memory also means that it can be hard to break English Setters of bad behavior, so early training is very important to keep bad habits from becoming permanent.

English Setters can only tolerate being alone for a few hours at at time. They should not be raised in homes where they will be alone all day or they will become destructive chewers and neurotic barkers. Companion dogs don't always help the situation, either, unless the dogs are raised together as puppies and the Setter considers the other dog part of his pack. Boredom can also lead to destructive behaviors in this breed. If not given enough activity during the day, an English Setter will find ways to entertain himself, and it often involves chewing things that don't belong to him.

The English Setter needs to be brushed at least three times per week to maintain coat and skin health as well as to remove tangles and mats. This breed is an average shedder and regular brushing will keep loose hair from landing around the house. Setters should be bathed every six to eight weeks to keep them smelling fresh, and bath day is also a good day for a trim, to keep the hair looking neat. It's easy to do at home, but some owners prefer to use the services of a professional groomer. The ears of the English Setter do not circulate air very well, and this breed is prone to ear infections. Check the ears once per week for signs of wax buildup, redness, or irritation. Use only a cotton ball and a veterinarian-approved cleanser for the ears. Weekly brushing of the teeth will keep the Setter's breath fresh and promote good gum health. If the dog does not wear his nails down naturally outdoors, monthly nail trimmings will be in order.