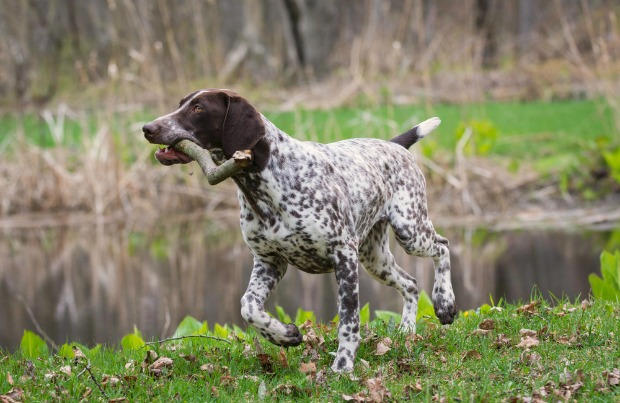 The precise origin of the German Shorthaired Pointer is unclear. According to the American Kennel Club, it is likely that the GSP is descended from a breed known as the German Bird Dog, which itself is related to the Old Spanish Pointer introduced to Germany in the 17th century. It is also likely that various German hound and tracking dogs, as well as the English Pointer and the Arkwright Pointer also contributed to the development of the breed. However, as the first studbook was not created until 1870, it is impossible to identify all of the dogs that went into creating this breed. The breed was officially recognized by the American Kennel Club in 1930.

The German Shorthaired Pointer is a versatile hunter, an all-purpose gun dog capable of high performance in field and water. The judgment of Shorthairs in the show ring reflects this basic characteristic. The overall picture which is created in the observer's eye is that of an aristocratic, well balanced, symmetrical animal with conformation indicating power, endurance and agility and a look of intelligence and animation. The dog is neither unduly small nor conspicuously large. It gives the impression of medium size, but is like the proper hunter, "with a short back, but standing over plenty of ground." Symmetry and field quality are most essential.

Most German shorthaired pointers are tough, healthy dogs, but the breed can be subject to a number of hereditary disorders due to their breeding. Some of these health disorders include, hypothyroidism, hip dysplasia, osteochondrosis dissecans (OCD), pannus, progressive retinal atrophy (PRA), epilepsy, skin disorders and cancerous lesions in the mouth, on the skin and other areas of the body. As with other breeds, un-spayed female GSPs are prone to breast cancer. This risk is reduced if they are spayed. Many factors, like genetics, environment, and diet can all contribute to hip dysplasia, which is a deformity of the hip joint. Not all German shorthaired pointers will get this if they have a healthy life style. Though in severe cases, surgical correction may be required. Like many other deep-chested dogs, German shorthaired pointers are highly prone to gastric dilatation volvulus (GDV), also known as bloat. This is a life-threatening condition, requiring immediate veterinary treatment. GDV occurs especially if the dog is fed one large meal a day, eats rapidly, drinks large amounts of water after eating, or exercises vigorously after eating. In GDV, the stomach distends with gas or air and then twists (torsion), so that the dog is unable to rid the excess air in stomach through burping or vomiting. Also, the normal return of blood to the heart is impeded, causing a drop in blood pressure and the dog will go into shock. Without immediate medical attention, the dog may die. Some symptoms of GDV are: distended abdomen, excessive salivation, retching without throwing up, restlessness, depression, lethargy, and weakness. Precautions against GVD include: refraining from feeding immediately before or after exercise, feeding several smaller meals throughout the day instead of a single large meal, and avoiding the consumption of large amounts of water with dry food. As with any other hunting dog, contact with game can cause the spread of fungi and bacteria that can easily colonise in the gums or cause infections on open wounds and small cuts from scratching against plants and bushes during a regular hunting session.

Bred to be versatile hunting dogs, the German Shorthaired Pointer is a much a loving family companion as he is a focused field assistant. GSP's love to be with people and are happiest when outdoors among friends. This breed is excellent with kids, though toddlers may get knocked over by a well meaning dog, so play should always be supervised. They are excellent watchdogs, and can be counted on to bark when there is a person approaching the home. Their bark is not aggressive, however, it's simply an alert. For an active, outdoorsy family, the German Shorthaired Pointer is an ideal choice.

One to two hours of vigorous outdoor exercise is a minimum for this energetic breed. They experience an extended puppyhood and adult GSP's are just as bouncy and rowdy as puppies, so burning off excess energy is a must. Couch potatoes and apartment dwellers are not an appropriate match for a Shorthaired Pointer, as confinement quickly leads to anxiety and destructiveness. Hunting is their favorite activity and they can spend an entire day in the field acting as trackers, pointers and retrievers. Hunters value them for their independent nature, and their instincts are inborn, so they require very little training in the field. Their webbed feet makes them efficient water retrievers, and these dogs love to swim. Hikes around lakes or rivers are the German Shorthaired Pointer's idea of heaven and will retrieve sticks from the water as long as someone is willing to toss them. They can keep up on jogs and bike rides and are excellent at catching frisbees. When outdoors, it is important that the Pointer be kept on a leash or in a fenced in yard. They are chasers and will take off like a shot after birds, cats or other small animals. Fences should be at least six feet high and be well rooted below the ground. Pointers can leap higher than you might think, and if leaping doesn't work, they'll resort to digging in order to get out and search for adventure.

German Shorthaired Pointers can be difficult to train. They pick up hunting commands quickly, but basic household obedience is a completely different story. They are distracted by every sight, sound and smell and if they catch something interesting it can be nearly impossible to get them re-focused on the task at hand. Training should be conducted early and sessions should be kept short. Positive reinforcement and a gentle but always consistent hand are the keys to training a GSP.

Separation Anxiety is common among this people-oriented breed. They attach themselves deeply to their family and become easily depressed when left alone. They express this through chewing, digging and excessive barking. Providing German Shorthaired Pointers with enough physical activity to tire them out can stave off anxiousness, but they are generally best suited for families with a stay at home parent or for those who don't work long hours. While Shorthaired Pointers are generally easy going creatures, they should not be trusted around cats or small dogs. Their desire to chase will overcome them at some point, even if they are raised alongside these smaller animals. Males can sometimes exhibit aggression toward other male dogs, so if you have a male GSP, any other dogs brought into the home should be female.

Low-maintenance describes the grooming needs of the German Shorthaired Pointer. They are mild shedders who only need to be brushed once a week with a firm bristle brush to keep the coat healthy and keep loose, dead hair under control. Bathe only as needed – over-bathing can cause the natural, water-repellent oils in the hair to break down. Many owners rub their Shorthaired Pointer with a chamois to make the coat gleam. Active dogs will wear down their toenails naturally, but if they make a clicking sound on hard floors, it is time for a trim. Check ears weekly for signs of irritation, infection, or wax buildup. Cleanse with a veterinarian-approved solution and a cotton ball, never with a cotton swab. Brushing teeth weekly will keep dog breath at bay and prevent tartar buildup.