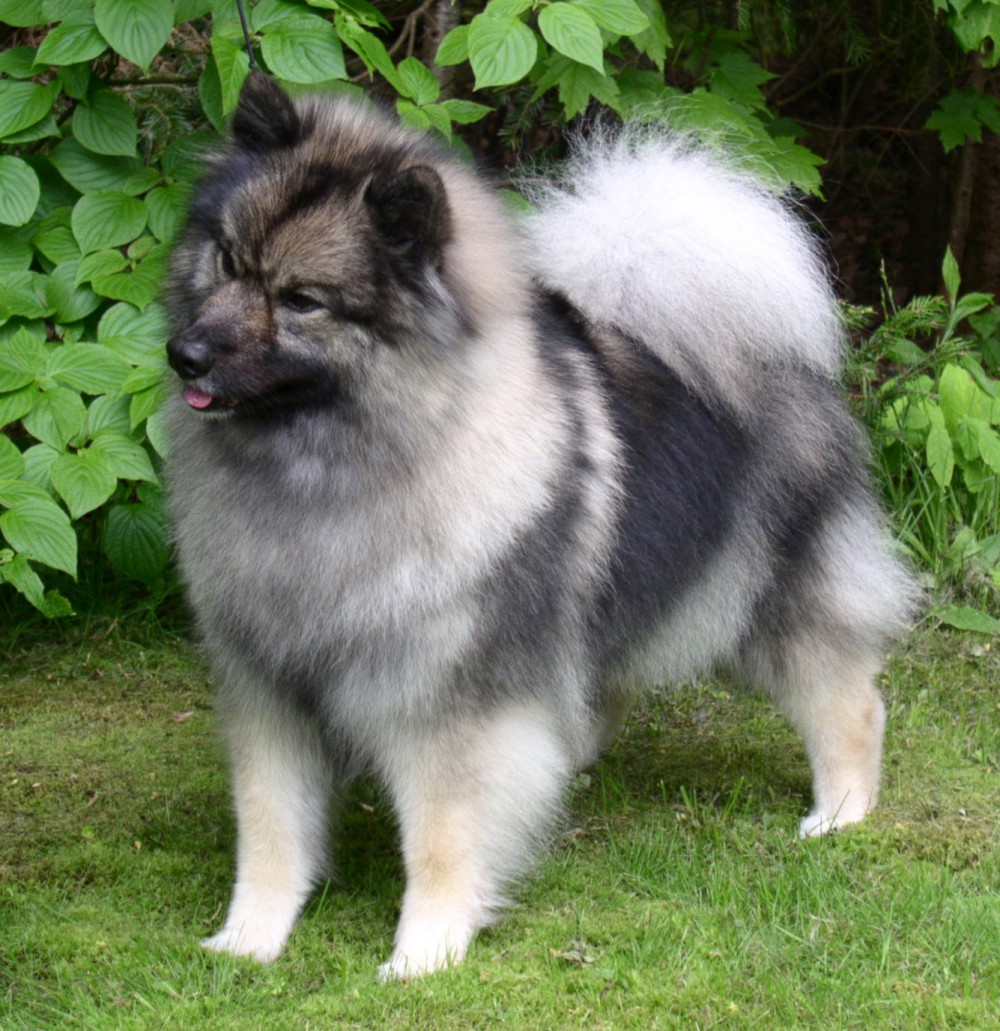 The Keeshond was named after the 18th-century Dutch Patriot, Cornelis (Kees) de Gyselaer (spelled 'Gijzelaar' in Modern Dutch), leader of the rebellion against the House of Orange. The dog became the rebels' symbol; and, when the House of Orange returned to power, this breed almost disappeared. The word 'keeshond' is a compound word: 'Kees' is a nickname for Cornelius (de Gyselaer), and 'hond' is the Dutch word for dog. In the Netherlands, "keeshond" is the term for German Spitzes that encompass them all from the toy or dwarf (Pomeranian) to the Wolfspitz (Keeshond). The sole difference among the German Spitzes is their coloring and size guidelines. Although many American references point to the Keeshond as we know it originating in the Netherlands, the breed is cited as being part of the German Spitz family, originating in Germany along with the Pomeranian (toy or dwarf German Spitz) and American Eskimo dog (small or standard German Spitz) according to the FCI.

The first standard for "Wolfspitz" was posted at the Dog Show of 1880 in Berlin. The Club for German Spitzes was founded in 1899. The German standard was revised in 1901 to specify the characteristic color that we know today, "silver grey tipped with black". In the late 19th century the "Overweight Pomeranian", a white German Spitz and most likely a Standard German Spitz, was shown in the British Kennel Club. The "Overweight Pomeranian" was no longer recognized by the British Kennel Club in 1915. In the 1920s, Baroness van Hardenbroeck took an interest in the breed and began to build it up again. The Nederlandse Keeshond Club was formed in 1924. The Dutch Barge Dog Club of England was formed in 1925 by Mrs. Wingfield-Digby and accepted into the British Kennel Club in 1926, when the breed and the club were renamed to Keeshond.

Carl Hinderer is credited with bringing his Schloss Adelsburg Kennel, which he founded in 1922 in Germany, with him to America in 1923. His German Champion Wolfspitz followed him two by two in 1926. At that time, less than ten years after World War I, Germany was not regarded fondly in England and America; and the Wolfspitz/Keeshond was not recognized by the AKC. Consequently, Carl had to register each puppy with his club in Germany. Despite this, Carl joined the Maryland KC and attended local shows.

Carl regularly wrote to the AKC, including the New York headquarters, to promote the Wolfspitz. While going through New York on his way to Germany in 1930, Carl visited the AKC offices and presented Wachter, his Germany champion, to AKC President, Dr. DeMond, who promptly agreed to start the recognition process, with some caveats including changing the name to Keeshond, and asked Carl to bring back all the relevant data from Germany. Carl also translated the German standard to English for the AKC. The Keeshond was accepted for AKC registration in 1930.

Despite intense lobbying the FCI would not accept the Keeshond as a separate breed since it viewed the Wolfspitz and Keeshond as identical. In 1997, the German Spitz Club updated its standard so that the typically smaller Keeshond preferred in America and other English-speaking countries could be included. This greatly expanded the gene pool and unified the standard internationally for the first time. Now bred for many generations as a companion dog, the Keeshond easily becomes a loving family member. As a result of the breed's history and friendly disposition, Keeshonden are sometimes referred to as "The Smiling Dutchman".

The Keeshond (pronounced kayz-hawnd) is a natural, handsome dog of well-balanced, short-coupled body, attracting attention not only by his coloration, alert carriage, and intelligent expression, but also by his stand-off coat, his richly plumed tail well curled over his back, his foxlike expression, and his small pointed ears. His coat is very thick around the neck, fore part of the shoulders and chest, forming a lion-like ruff-more profuse in the male. His rump and hind legs, down to the hocks, are also thickly coated, forming the characteristic “trousers.” His head, ears, and lower legs are covered with thick, short hair.

Keeshonden are generally a very healthy breed. Though congenital health issues are not common, the conditions which have been known to sometimes occur in Keeshonden are hip dysplasia, luxating patellas (trick knee), epilepsy, Cushing's disease, diabetes, primary hyperparathyroidism, and hypothyroidism. Von Willebrand's disease has been known in Keeshonden but is very rare. An accurate test for the gene causing primary hyperparathyroidism (or PHPT) has recently been developed at Cornell University. As with any breed, it is important when buying a puppy to make sure that both parents have been tested and certified free from inherited problems. Test results may be obtained from the breeder, and directly from the Orthopaedic Foundation For Animals site. Keeshonds in a UK Kennel Club survey had a median lifespan of 12 years 2 months.

Temperament is extremely important in the Keeshond breed. Well-bred, well-mannered Keeshonds are neither timid nor aggressive. To the contrary, they are outgoing, lively and friendly, both with people and with other dogs. These are smart, intelligent, alert, affectionate animals. They are gregarious and cuddly, and are particularly fond of children. Keeshonds thrive on being with their people. They always want to be the center of attention and to participate in all family activities.

The Keeshond is a sturdy, nimble, game dog that enjoys accompanying its owner on any and all outings. Keeshonds love to go on long leisurely walks at parks, beaches or just around the neighborhood. They are playful, adventurous and more than willing to try new activities. They don’t need an enormous amount of exercise, but they will do best with regular walks and activity.

Keeshonds are quick-learners that usually are in-tune with their owners. However, they can be somewhat independent and self-directed, which can make training a bit challenging. Positive reinforcement, and especially use of tasty treats, lavish praise and other techniques to motivate the Keeshond, should give him enough encouragement to follow his owner’s directions. Repetition, repetition and more repetition, together with a healthy dose of patience, are critical to successful training of a Keeshond. It is also important to socialize these dogs from an early age, to give them the best chance of blossoming into well-adjusted, stable, self-confident adults.

Keeshonds are well-suited to apartment living and don’t require a great deal of space to be content. They make delightful urban companions. However, they can be a bit barky, which is a hold-over from their watchdog ancestry, and they continue to be good watchdogs to this day. Keeshonds are good eaters that are fond of treats and table scraps. Owners should feed them a high-quality diet and take care to keep their weight under control. Keeshonds are smart and agile. They are increasingly recognized as outstanding obedience, agility and rally competitors. They have earned the designation as premier therapy dogs for autistic children, which is not surprising since their love of children is legendary.

Despite their dense coats, Keeshonds really are not high-maintenance dogs. They need a good brushing several times a week to keep shedding and mats under control and to distribute skin oils across their coats. Nail and dental care for Keeshonds are the same as that for most other breeds.