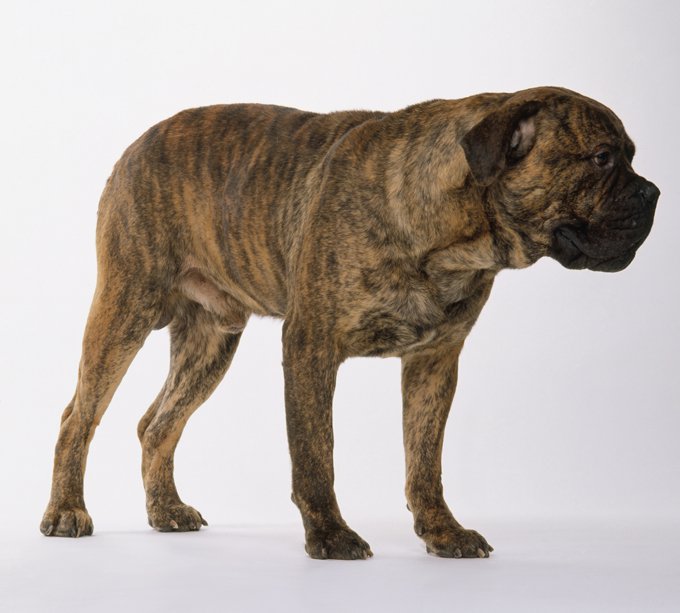 In tracing the history of this noble breed, we can avoid confusion by noting the distinction between mastiffs, with a lowercase “m,” and Mastiffs, the traditional giant breed of England, sometimes called the Old English Mastiff. Dogs known as mastiffs have been known around the world for thousands of years. Surviving evidence from ancient Egypt, Greece, Rome, China, and Tibet all bear traces of ferocious giant canines classified as mastiffs. The Tibetan Mastiff and Neapolitan Mastiff are examples of these ancient breeds that have endured to this day.

The British mastiff type, the AKC breed we know as the Mastiff, is similarly ancient breed. When Julius Caesar led an invasion of Britain in 55 b.c., he was impressed by the mastiffs who helped defend the island against his legions and made note of it in his campaign journal. British mastiffs were brought back to Rome to battle wild beasts and human gladiators in the arena.

The Mastiff as we know it came into focus in medieval England, used as big-game hunters, nighttime guardians of estates, and war dogs. In the “Canterbury Tales,” Chaucer calls them “Alaunts” (a French breed name) and says they were “as great as any steer/To hunt at the lion or the deer.” Mastiffs fought alongside the British against the French in 1415 at the Battle of Agincourt, later immortalized by Shakespeare.

At the end of World War II, England stood victorious but depleted. It was estimated that only 14 Mastiffs survived in the entire country. The Mastiff population was rebuilt with the help of U.S. breeders who exported specimens from good British stock back to the mother country. Today’s Mastiff is more docile and friendly than his ancient forebears, but no less courageous.

The Mastiff is a large, massive, symmetrical dog with a well-knit frame. The impression is one of grandeur and dignity. Dogs are more massive throughout. Bitches should not be faulted for being somewhat smaller in all dimensions while maintaining a proportionally powerful structure. A good evaluation considers positive qualities of type and soundness with equal weight.

Like other giant breeds, the Mastiff is not long-lived. Its average life span is 9 to 10 years. Breed health concerns may include bloat (gastric dilitation and volvulus), elbow and hip dysplasia, cystine urolithiasis, entropion, ectropion, eversion of the cartilage of the nictitating membrane, prolapse of the gland of the nictitating membrane (“cherry eye”), corneal dystrophy, pulmonic stenosis, mitral dysplasia, osteosarcoma, persistent papillary membrane, progressive retinal atrophy, vaginal hyperplasia and seizures.

The Mastiff has undergone quite a change over the last 500 years. They were originally bred to be combat dogs, both guarding troops and fighting alongside them. Then they were used in the Roman Coliseum to fight human and animal opponents. In modern times, these massive dogs are wonderful companion animals. They are excellent with children – patient, nurturing, protective, but always up for a romp in the yard, and attach themselves deeply to the people they love. Mastiff owners claim their dogs have no idea just how large they are, and often (hilariously) try climb on couches and even into the bed for a snuggle. They still make excellent guard dogs, protecting their homes and people with great vigilance, but they are not aggressive. Should they encounter a ne'er-do-well they will hold that person at bay until backup arrives. For families with plenty of room and lots of love to give, the Mastiff makes an excellent family pet.

Mastiffs are not apartment dogs, by any means, and houses should be large enough to accommodate these giants, as they can weigh up to 200 pounds. Mastiffs need regular daily exercise which should include walks and the opportunity to run. If this large, naturally rowdy breed doesn't get enough exercise, he will burn off his excess energy in other ways, which usually means destructive chewing. A Mastiff's yard should always be fenced. They aren't likely to wander too far off, but they will chase away other dogs, cats, squirrels and possibly people, so it's best to keep them safe with a sturdy fencing system. Electrical fences aren't recommended, as this breed has a high tolerance for pain, and is likely to be completely unphased by the shock.

Training a Mastiff can be challenging and should begin as early as possible in order to keep the process as simple as possible. The larger a Mastiff gets, the harder it is to get bad habits under control. Training needs to be conducted by a strong leader, as they will walk all over a softie whose rules are not always consistent. Socialization should take place early and often, to prevent their natural protectiveness from getting out of hand. Mastiffs need to be taught to accept visitors as welcome guests, and they need to understand that if children are playing rough-and-tumble with neighbors, that the kids are not in immediate danger. Training and socialization are the most key factors in determining the temperament of your adult Mastiff.

Mastiffs are fine with other household pets, when raised alongside them from puppyhood. Once a Mastiff hits adolescence, he will not tolerate new animals coming into his territory. Proper training and socialization is required to keep their protectiveness from turning into animal aggression. Mastiffs make a lot of noise. They aren't excessive barkers, but their bark is loud and booming, so they need to learn to obey commands to stop barking. They also snore, grunt, wheese, snort and slobber. Some people find these traits to be endearing, while others find them to be intolerable.

Though their hair is short, Mastiffs shed year-round, with heavy shedding in the spring and fall. Weekly brushing with a hound mitt can keep flyaway hair under control. Mastiffs only need to be bathed as needed, but they do need to have their wrinkles cleaned daily in order to prevent bacterial infections. The most essential part of cleaning the wrinkles is to dry them thoroughly. The flews (the part of the upper lip that hangs) also need to be cleaned after meals. Check the ears on a regular basis for signs of wax buildup, irritation or infection. Clean the ears with a cotton ball and a veterinarian-approved cleanser; never use a cotton swab in a dog's ear canal. Teeth should be brushed on a weekly basis to prevent tartar buildup, promote gum health and keep bad breath at bay. Trim nails monthly if the dog does not wear the toenails down naturally outdoors.