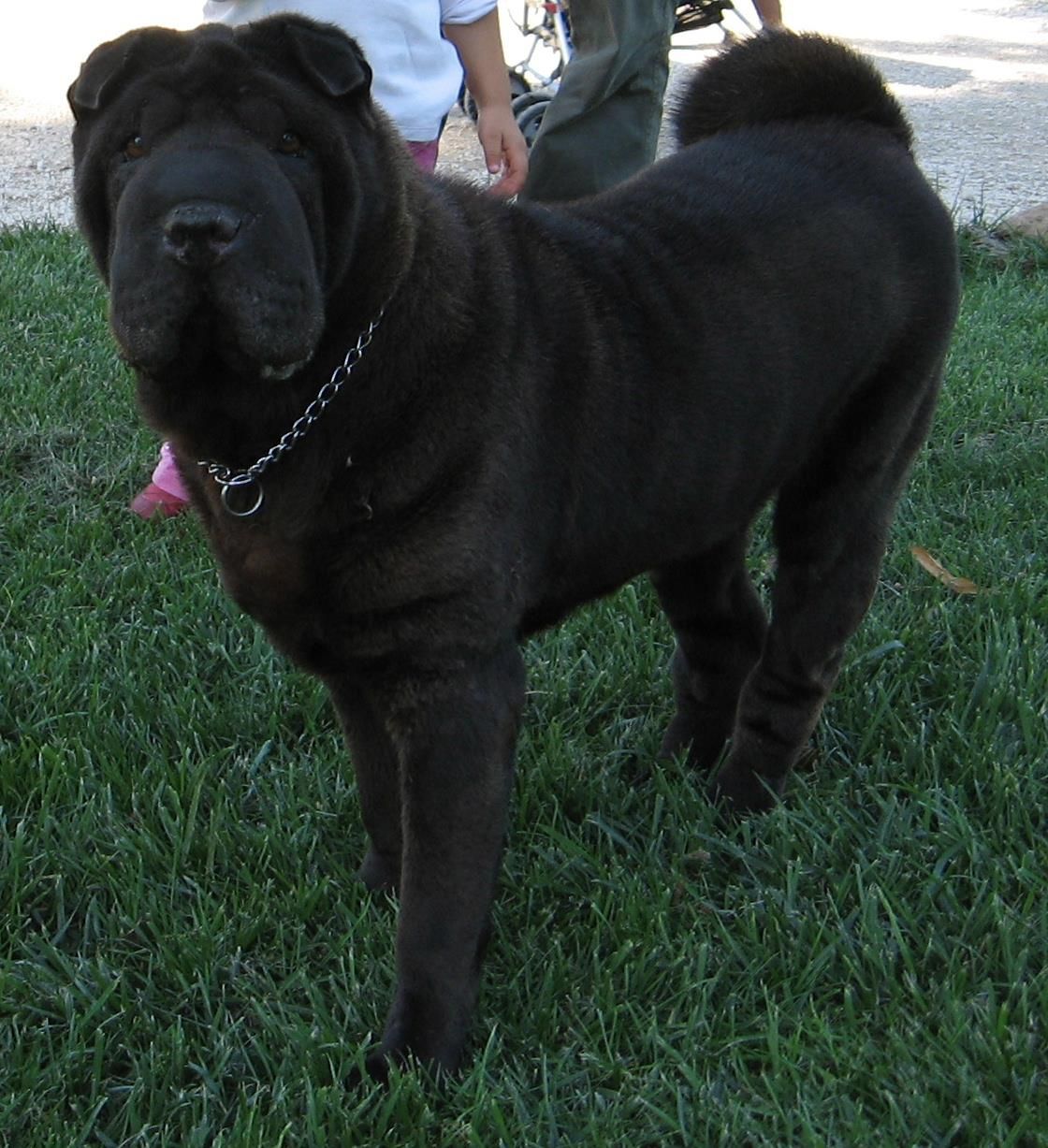 The Shar Pei has been identified as a basal breed that predates the emergence of the modern breeds in the 19th Century. The Shar Pei breed comes from the Guangdong province of China. The original Shar-Pei from China looked very different from the breed now popular in the West. People in southern China, Hong Kong, and Macau differentiate the Western type and the original type by calling them respectively 'meat-mouth' and 'bone-mouth' Shar-Pei.

The Shar Pei's loose skin and extremely prickly coat were originally developed to help the dogs fend off wild boar, as they were used to hunt. Later, the breed was used for dog fighting; these enhanced traits made the Shar Pei difficult for its opponent to grab and hold on to, and so that if it did manage to hold on, the Shar Pei would still have room to maneuver and bite back; when grabbed by any loose wrinkle, a Shar Pei can actually twist in their skin and face in their opponent's direction. In fighting, they would twist in their skin to bite the assailant back.

During the Communist Revolution, when the Shar Pei population dwindled dramatically, dogs were rescued by a Hong Kong businessman named Matgo Law, who in 1973 appealed to Americans through a dog magazine to save the breed. Around 200 Shar Peis were smuggled into America. The current American Shar Pei population stems mainly from these original 200.

An alert, compact dog of medium size and substance; square in profile, close coupled; the well-proportioned head slightly but not overly large for the body. The short, harsh coat, the loose skin covering the head and body, the small ears, the “hippopotamus” muzzle shape and the high set tail impart to the Shar-Pei a unique look peculiar to him alone. The loose skin and wrinkles covering the head, neck and body are superabundant in puppies but these features may be limited to the head, neck and withers in the adult.

Because of its popularity after being introduced to North America in the 1970s, the breed suffered much inexperienced or rushed breeding. This resulted in not only a dramatically different look for the Shar-Pei (as its most distinctive features, including its wrinkles and rounded snout, were greatly exaggerated), but also a large number of health problems. The American breed club states that few Shar Peis make it to age 10 and has a longevity program that records dogs that live 10 years or more.

Familial Shar Pei fever (FSF) is a serious congenital disease that causes short fevers lasting from 24 hours, sometimes up to three days and usually accompanied by accumulation of fluid around the ankles (called Swollen Hock Syndrome). Amyloidosis, a long-term condition, is most likely related to FSF, caused by unprocessed amyloid proteins depositing in the organs, most often in the kidneys or liver, leading eventually to renal failure.[citation needed] The disease is associated with the western type and it is estimated that 23% are affected. The Australian breed standard was changed in 2009 to discourage breeding for heavy wrinkling.

A common problem is a painful eye condition, entropion, in which the eyelashes curl inward, irritating the eye. Untreated, it can cause blindness. This condition can be fixed by surgery ("tacking" the eyelids up so they will not roll onto the eyeball for puppies or surgically removing extra skin in adolescent and older Shar Pei). In Australia, more than 8 in 10 Shar Peis require surgery to correct eye problems, contributing to them being the most expensive breed to insure.

The Shar-Pei is also prone to chronic yeast infections in its ears. This is due to tight inner ear structure with a wrinkled appearance, making cleaning very difficult; exacerbated by the tight "flap" that the ear creates over the canal, promoting a moist environment. Vitamin B12 deficiency is a common problem in the Shar Pei and is suspected to be hereditary.

The large head and wrinkled face of the Chinese Shar-Pei has oven been compared to the head of a hippopotamus. They are independent and willful dogs, but when exposed to confident, consistent leadership are respectful companions and clean housemates. Their ever-present scowl coupled with their alert nature, makes them an imposing looking guard dog. The Shar-Pei's tenency toward independence them good companions for single people or working families with older children. They don't require much attention or exercise to keep them happy, and can entertain themselves with lots of chew toys or sun to bathe in.

Despite their large size, the Chinese Shar-Pei does not need a lot of vigorous exercise to maintain good health. Several walks a day will suffice, making them good city dogs. It is recommended Shar-Peis, despite their watchdog capabilities, not be raised on a farm. Their natural instinct to hunt means they can take off into the wild blue yonder after deer or other wild animals.

The main ingredient needed when training a Shar-Pei is patience. They are willful creatures who don't like to be told what to do, and they naturally assume they are in charge. Consistency, positive reinforcement and lots of treats will garner response from a Shar-Pei, but only when he's ready to respond. They will take a mile if given an inch, so rules and boundaries need to be reinforced at all times. This breed is not for the first-time owner, and even experienced owners have confessed to finding working with a Shar-Pei a challenge. House training a Shar-Pei is a completely different story, however. Despite their aversion to obedience training, Shar-Peis have been known to house train themselves. They are naturally a very clean dog and instinctively they will not relieve themselves in their home area.

This breed is a natural guard dog and aggression toward other animals and people can be a common problem with Shar-Peis. Early socialization is imperative in the development of a healthy dog. They are naturally wary of strangers, so they must learn early on the difference between a welcome visitor and an unwelcome stranger, otherwise the Shar-Pei will naturally assume all strangers are bad. Dog aggression can be severe, so males should always be neutered, and as puppies they should be exposed to other friendly dogs as often as possible. Homes with small children are not the best environment for a Shar-Pei. He won't be patient enough to tolerate a child playing roughly and will define his boundaries by snapping or biting. Shar-Peis are noisy – they snort, snore, grunt and gurgle all day and all night. They also have a tendency to slobber and drool when they are excited.

Chinese Shar-Peis are naturally clean animals who do not emit an order and only require minimal brushing once a week to remove dead hair from his minimally-shedding body. They don't require frequent bathing; every 12 weeks is about the average. Over-bathing a Shar-Pei can cause skin ingratiation. The most essential part of grooming a Shar-Pei is the maintenance of his wrinkles. After a bath, the wrinkles must be dried quickly and thoroughly to prevent yeast or fungal infections. Check a Shar-Pei's ears regularly for signs of infections, but when caring for the ears, never use a swab. This breed has short ear canals that can easily be damaged. A veterinarian can teach the proper technique for cleaning a Shar-Pei's ears. Additionally, regular tooth brushing should be part of the Shar-Pei's grooming regimen. It keeps teeth and gums healthy, and wards off dreaded doggie breath.