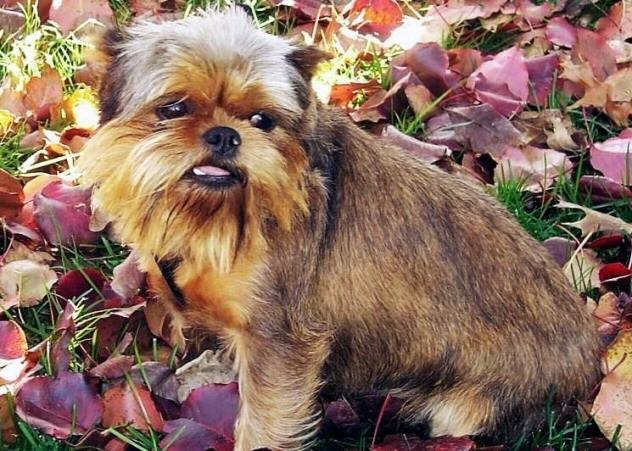 The breed is German in origin and dates back to the seventeenth century. The name is derived from the German Affe (ape, monkey). The breed predates and is ancestral to the Griffon Bruxellois (Brussels Griffon) and Miniature Schnauzer.

Dogs of the Affenpinscher type have been known since about 1600, but these were somewhat larger, about 12 to 13 inches, and came in colors of gray, fawn, black and tan and also red. White feet and chest were also common. The breed was created to be a ratter, working to remove rodents from kitchens, granaries, and stables.

Banana Joe V Tani Kazari (AKA Joe), a five-year-old Affenpinscher, was named Best in Show at the 2013 Westminster Kennel Club Dog Show in New York City. This win is notable since it is the first time this breed has won Best in Show at Westminster.

The Affenpinscher is a balanced, wiry-haired terrier-like toy dog whose intelligence and demeanor make it a good house pet. Originating in Germany, the name Affenpinscher means "monkey-like terrier." The breed was developed to rid the kitchens, granaries, and stables of rodents. In France the breed is described as the "Diablotin Moustachu" or moustached little devil. Both describe the appearance and attitude of this delightful breed. The total overall appearance of the Affenpinscher is more important than any individual characteristic. He is described as having a neat but shaggy appearance.

The average life span of an Affenpinscher is 11 to 14 years. Due to their small size they may be at an increased risk of suffering tracheal damage from incorrect use of collars and leashes. Supplements which support joint health, and walking this breed on a harness instead of a collar and leash, can help to lower this health risk. Other breed health concerns may include the following:

Affenpinschers are tiny, but they have large personalities. They take themselves very seriously, and require everyone else to take them seriously as well, resulting in humorous interactions with people. Their terrier blood makes them spunky and sassy, and many owners wonder if these tiny toy dogs know just how small they really are. Mostly seen as “purse dogs” by ladies around the world, the Affen is a lovely travel companion, easy-going and accepting of new situations. Just keep an eye on the Affenpinscher about town, this breed can be mischievous.

This toy breed does not require excessive amounts of exercise, a few short walks a day will suffice. Apartment-dwellers should be cautioned, however; as Affens bark, so while they are small enough to dwell in close-quarters, they may drive your neighbors crazy.

Affenpinschers are good family dogs, they love to play and are affectionate, however they can be territorial and are not the best fit for a house with small children.

When outdoors, Affens should be kept on a leash or in a fenced-in yard for their own protection. Toy breeds are easily injured and can even die from being stepped on, tripped over, or picked up by a large dog.

Affens are generally people-pleasers but can be stubborn, so early training is key to having an obedient dog. They respond best to positive reinforcement, with lots of treats and affection. Consistency and a gentle hand are required to prevent the Affen from becoming distrusting of people.

This tiny dog, with a penchant for mischief makes a good therapy dog. They travel well, adapt well in new environments and make people laugh, making them an ideal visitor for lifting the spirits of the elderly or the sick.

Affenpinschers are classic “yappy” dogs. They bark at just about anything and everything. This can be controlled with early training, but it generally can't be completely trained away.

Affenss are easily adaptable to new situations, but if not properly socialized, they can become wary of new people and places, causing them great anxiety.

Affenpinschers often appear on lists of dogs that allegedly do not shed (moult). Every hair in the dog coat grows from a hair follicle, which has a three phase cycle, as do most mammals. These cycles are: anagen, growth of normal hair; catagen, growth slows, and hair shaft thins; telegen, hair growth stops, follicle rests, and old hair falls off—is shed. At the end of the telegen phase, the follicle begins the cycle again. The length of time of the growing and shedding cycle varies by breed, age, and by whether the dog is an inside or outside dog.

Frequent grooming reduces the amount of loose fur in the environment.