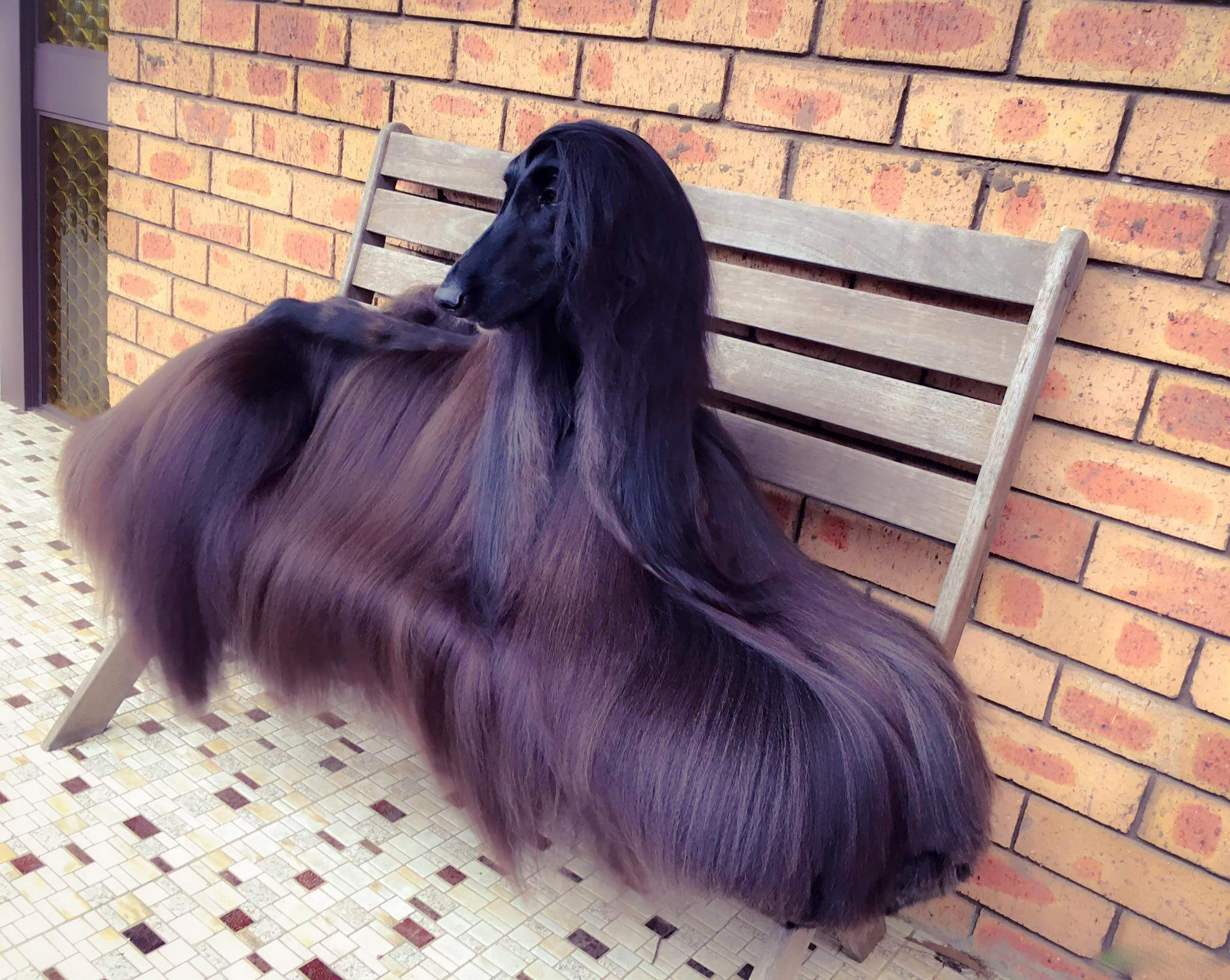 Today's modern purebred breed of Afghan Hound descends from dogs brought to Great Britain in the 1920s which King Amanullah of the Afghan Royal Family gave away as gifts. Some had been kept as hunting dogs, others as guardians.

Although the breed is demonstrably ancient, verifiable written or visual records that tie today's Afghan Hound breed to specific Afghan owners or places are absent. There is much speculation about the breed's origin and possible connections with the ancient world among fanciers and in non-scientific breed books and breed websites. Connections with other types and breeds from the same area may provide clues to the history. A name for a desert coursing Afghan hound, Tazi (sag-e-tazi), suggests a shared ancestry with the very similar Tasy breed from the Caspian Sea area of Russia and Turkmenistan. Other types or breeds of similar appearance are the Taigan from the mountainous Tian Shan region on the Chinese border of Afghanistan, and the Barakzay, or Kurram Valley Hound. There are at least 13 types known in Afghanistan, and some are being developed (through breeding and record keeping) into modern purebred breeds.

One dog in particular, Zardin, was brought in 1907 from India by Captain Bariff, and became the early ideal of breed type for what was still called the Persian Greyhound. Zardin was the basis of the writing of the first breed standard in 1912.

These dogs were of the lowland or steppe type, also called kalagh, and are less heavily coated. The second strain was a group of dogs from a kennel in Kabul owned by Mrs. Mary Amps, which she shipped to England in 1925. She and her husband came to Kabul after the Afghan war in 1919, and the foundation sire of her kennel (named Ghazni) in Kabul was a dog that closely resembled Zardin. Her Ghazni strain were the more heavily coated mountain type. Most of the Afghans in the United States were developed from the Ghazni strain from England. The first Afghans in Australia were imported from the United States in 1934, also of the Ghazni strain. The French breed club was formed in 1939 (FALAPA). The mountain and steppe strains became mixed into the modern Afghan Hound breed, and a new standard was written in 1948, which is still used today.

The spectacular beauty of Afghan Hound dogs caused them to become highly desirable showdogs and pets, and they are recognised by all of the major kennel clubs in the English-speaking world. One of the Amps Ghazni, Sirdar, won BIS at Crufts in 1928 and 1930. An Afghan hound was featured on the cover of Life Magazine, November 26, 1945. "Afghan Hounds were the most popular in Australia in the 1970s…and won most of the major shows". An Afghan Hound won BIS (Best in Show) at the 1996 World Dog Show in Budapest. Afghan hounds were BIS at the Westminster Kennel Club Dog Show in 1957 and again in 1983. That win also marked the most recent win at Westminster for breeder-owner-handler, Chris Terrell.

The Afghan Hound is an aristocrat, his whole appearance one of dignity and aloofness with no trace of plainness or coarseness. He has a straight front, proudly carried head, eyes gazing into the distance as if in memory of ages past. The striking characteristics of the breed-exotic, or "Eastern," expression, long silky topknot, peculiar coat pattern, very prominent hipbones, large feet, and the impression of a somewhat exaggerated bend in the stifle due to profuse trouserings-stand out clearly, giving the Afghan Hound the appearance of what he is, a king of dogs, that has held true to tradition throughout the ages.

Overall the the Afghan Hound is a healthy dog breed, and has an average life span of 12 to 13 years. This is slightly higher than the median lifespan of purebred dogs (10 to 13 years), but equal to most breeds similar in size.

Major health issues are allergies, cancer, and hip dysplasia. Sensitivity to anesthesia is an issue the Afghan hound shares with the rest of the sighthound group, as sighthounds have relatively low levels of body fat. Afghan hounds are also among the dog breeds most likely to develop chylothorax, a rare condition which causes the thoracic ducts to leak, allowing large quantities of chyle fluid to enter the dog's chest cavity. This condition commonly results in a lung torsion (in which the dog's lung twists within the chest cavity, requiring emergency surgery), due to the breed's typically deep, "barrel"-shaped chest. If not corrected through surgery, chylothorax can ultimately cause fibrosing pleuritis, or a hardening of the organs, due to scar tissue forming around the organs to protect them from the chyle fluid. Chylothorax is not necessarily, but often, fatal.

Tall, lean and noble, the Afghan Hound is often called “The Aristocrat” of the dog world. Though Afghans appear aloof, they are actually quite playful and clownish. They love running (galloping, really) through yards and playing with their family, but also enjoy quietly lounging around the house, being catered to like a true Aristocrat.

Afghan Hounds require a lot of exercise. Long and lean, they need plenty of time a day to run and jump. Long walks are also beneficial to their health and muscle tone. This tall animal should not be kept in an apartment, as this space is simply too confining.

A fenced in yard is important when living with an Afghan. They are very independent dogs, and can take off in search of their own adventure (and not return) if allowed to roam.

Afghans are notoriously difficult to train. They are stubborn and independent, and like a true aristocrat, don't like being told what to do. Positive reinforcement, treats, and lots of patience are required when working with this breed.

Afghan Hounds, originally called the “Tazi,” originated in Afghanistan and is one of the oldest dog breeds. Their purpose was to track large game, including leopards, and hold the animal at bay until the hunting party could catch up. They were valued by hunters for their fearlessness and independent thinking abilities, and these traits can easily frustrate the modern Afghan trainer.

Afghans are sight hounds, and excel on lure courses, where dogs chase a plastic, mechanical lure around a track, across a field, or through and obstacle course.

Afghans are playful puppies, but as they mature, become very independent. While they may have loved cuddling and romping as a puppy, the adult Afghan will decide when he wants to be touched. They are not aggressive, but much like a house cat, will let you know when they prefer to be left alone and when they prefer to be doted upon.

Because of their hunting roots, Afghan Hounds are likely to chase after other animals, including small pets. If socialized to live with other dogs, they can coexist peacefully, but cats or rabbits should not live with Afghan Hounds.

Properly grooming an Afghan Hound requires a great deal of time and effort. The Afghan's fine coat is similar in texture to human hair, and tangles very easily, making daily brushing a must. Baths should also be conducted frequently, and trimming and stripping of the coat is required several times a year. Many owners find that hiring a professional groomer is the best way to properly maintain the Afghan Hound's coat.

Afghan Hounds have pendant ears, meaning their ears hang, which can lead to ear infections. Regular, weekly ear cleanings with a cotton ball and a veterinarian-recommended cleanser can keep infections at bay.