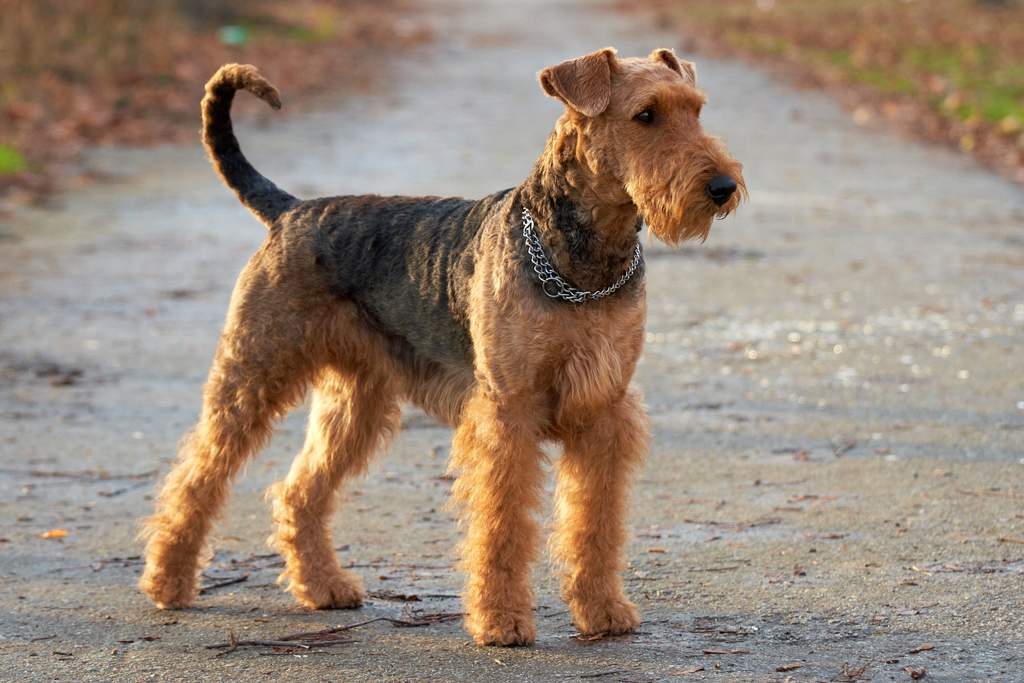 In 1864 they were exhibited for the first time at a championship dog show sponsored by the Airedale Agricultural Society. They were classified under different names, including Rough Coated, Bingley and Waterside Terrier. In 1879 breed fanciers decided to call the breed the Airedale Terrier, a name accepted by the Kennel Club (England) in 1886.

During the middle of the 19th century, regular sporting events took place along the River Aire in which terriers pursued the large river rats that inhabited the area. A terrier was judged on its ability to locate a "live" hole in the riverbank and then, after the rat was driven from its hole by a ferret brought along for that purpose, the terrier would pursue the rat through water until it could make a kill. As these events became more popular, demand arose for a terrier that could excel in this activity. One such terrier was developed through judicious crossings of the Black-and-Tan Terrier and Bull and Terrier dogs popular at the time with the Otter Hound. The result was a long-legged fellow that would soon develop into the dog we recognize today as the Airedale Terrier. his character was too big to "go to ground" in the manner of the smaller working terriers; however, it was good at everything else expected of a sporting terrier, and it was particularly adept at water work. This big terrier had other talents in addition to its skill as a ratter. Because of its hound heritage it was well equipped to pick up the scent of game and due to its size, able to tackle larger animals. It became more of a multipurpose terrier that could pursue game by powerful scenting ability, be broken to gun, and taught to retrieve. Its size and temperament made it an able guardian of farm and home. One of the colorful, but less-than legal, uses of the early Airedale Terrier was to assist its master in poaching game on the large estates that were off-limits to commoners. Rabbits, hare, and fowl were plentiful, and the Airedale could be taught to retrieve game killed by its master, or to pursue, kill, and bring it back itself.

The patriarch of the breed is considered to be CH Master Briar (1897–1906). Two of his sons, Crompton Marvel and Monarch, also made important contributions to the breed.

The first Canadian registrations are recorded in the Stud book of 1888–1889.

1949 marked the peak of the Airedales' popularity in the USA, ranked 20th out of 110 breeds recognized by the American Kennel Club.

The Airedale Terrier, also known as the Waterside Terrier, the Yorkshire, the Bingley Terrier, the Warfedale Terrier, the Broken-haired Terrier and the Working Terrier, is a hardy, water-loving dog that is the largest of all terriers. Its name comes from a small otter-river, the Aire, in northern England. The Airedale is known for its extreme intelligence, dense wiry double coat, high energy level and tenacity. This breed is peaceful unless provoked; they are said not to pick a fight, but always to finish one. Airedales will fight furiously to protect home and family and typically are better with people than with other dogs. If not properly socialized and trained from a young age, Airedales may exercise their intense prey drive on smaller dogs and cats. Without regular exercise, they can become destructive. Male Airedale Terriers should be 23 to 24 inches in height and weigh between 50 and 65 pounds. Female Airedales should be 22 to 23 inches tall at the shoulder and between 40 and 45 pounds in weight. Fairly intensive grooming is a lifelong requirement to keep an Airedale’s coat and skin in good condition.

The Airedale Terrier has an average lifespan of 10 to 13 years. Generally speaking, this is a healthy, hardy breed.

Airedales can be affected by hip dysplasia. Like most terriers, they have a propensity towards dermatitis. Skin disorders may go unnoticed in Airedales, because of their hard, dense, wiry coats. Itchy skin may be manifest as acral lick dermatitis (also known as lick granuloma; caused by licking one area excessively) or acute moist dermatitis or "hot spots" (an oppressively itchy, inflamed and oozing patch of skin, made worse by intense licking and chewing). Allergies, dietary imbalances, and under/over-productive thyroid glands are the main causes of skin conditions.

An Airedale's coat was originally designed to protect the dog from its predators—the coat was designed to come out in the claws of the predator the dog was designed to hunt, leaving the dog unharmed. Because of this, some forms of skin dermatitis can respond to hand stripping the coat. Clipping the coat cuts the dead hair, leaving dead roots within the hair follicles. It is these dead roots which can cause skin irritations. However, hand stripping removes these dead roots from the skin and stimulates new growth.

Gastric dilatation volvulus, also known as bloat, affects Airedale Terriers. The stomach can twist and block the esophagus, causing a buildup of gas and leading to cardiovascular collapse and death. Signs of bloat include gastric distress (stomach pain), futile attempts at vomiting, and increased salivation. Bloat usually occurs when the dog is exercised too soon after eating. They will eat up to 4-6 cups of food at a time.

Due to the breed's stoic nature, injuries can go unnoticed for a time as the dog will not give obvious signs of pain or distress like whining. For example, the first indication of a cut on the foot might be limping or favoring that foot a few days after the actual injury, so owners should be aware of their pets usual movement to spot irregularities. Excessive licking of a spot may also indicate a problem other than the skin conditions listed above.

Airedale Terriers are hard-working, hard-playing dogs with boundless energy. The are vigilant and protective, making them excellent watchdogs, though they are friendly to family and friends. A true family dog, the Airedale loves attention from all people, will enjoy running and playing with children by day, and curling up for a belly rub with parents by night.

Airedale Terriers are a high-energy, thinking breed. They need as much mental activity as they need physical activity, and apartments are not the right living situation for them. Families with large, fenced yards are ideal, as the Airedale needs plenty of room to run during the day. They enjoy chasing and hunting, so fetching and hide-and-seek games are among an Airedale's favorite activities. Airedales do well with children, though they can exert dominance over small children. If an Airedale is raised alongside small children, however, they can be socialized to know that children are not to be dominated.

The Airedale is a thinking breed – in addition to keeping his physical activity high, he will require mental stimulation as well. Basic obedience should be conducted with confidence and positive reinforcement. This breed likes to be the Alpha Dog, so it is important to establish who is in charge from an early age, and always be consistent, because Airedales will take a mile if given an inch. They excel in advanced obedience, tricks and agility training, thanks to their high intelligence. Training should be conducted with treats, and a drill-style of repeat tasks works best to keep an Airedale Terrier's attention.

The Airedale is a terrier, so barking is a common complaint of owners. Airedales will bark at strangers, other animals, neighbors, cars, anything that moves. Early training to obey a stop barking command is imperative. Like barking, chasing is a common behavior of terrier breeds, and the Airedale is no exception. They should be kept in a fenced-in yard or on a leash whenever outdoors. Once and Airedale takes off on a chase, it will be nearly impossible to stop him. Digging can also be a problem with this breed. If outside, they should be supervised as they can tear up a flowerbed in record time. Cats, rabbits or other small pets should not be brought in to a home with an Airedale. They were originally bred to hunt, and this instinct is still very strong.

If left untrimmed, the Airedale's coat can become quite unruly. Owners of family Airedales have their dogs trimmed or stripped several times a year in order to keep the coat short and manageable. Show Airedales require regular stripping to keep the coat up to snuff. Weekly brushing is required to keep the coat neat between baths and trims. Airedales do not require frequent bathing, in fact over-bathing this breed can cause the coat to break down and become soft, which is not the proper texture. Airedale Terrier's nails should be trimmed monthly, and though they are not prone to ear infections, the ears should be cleaned monthly as well.