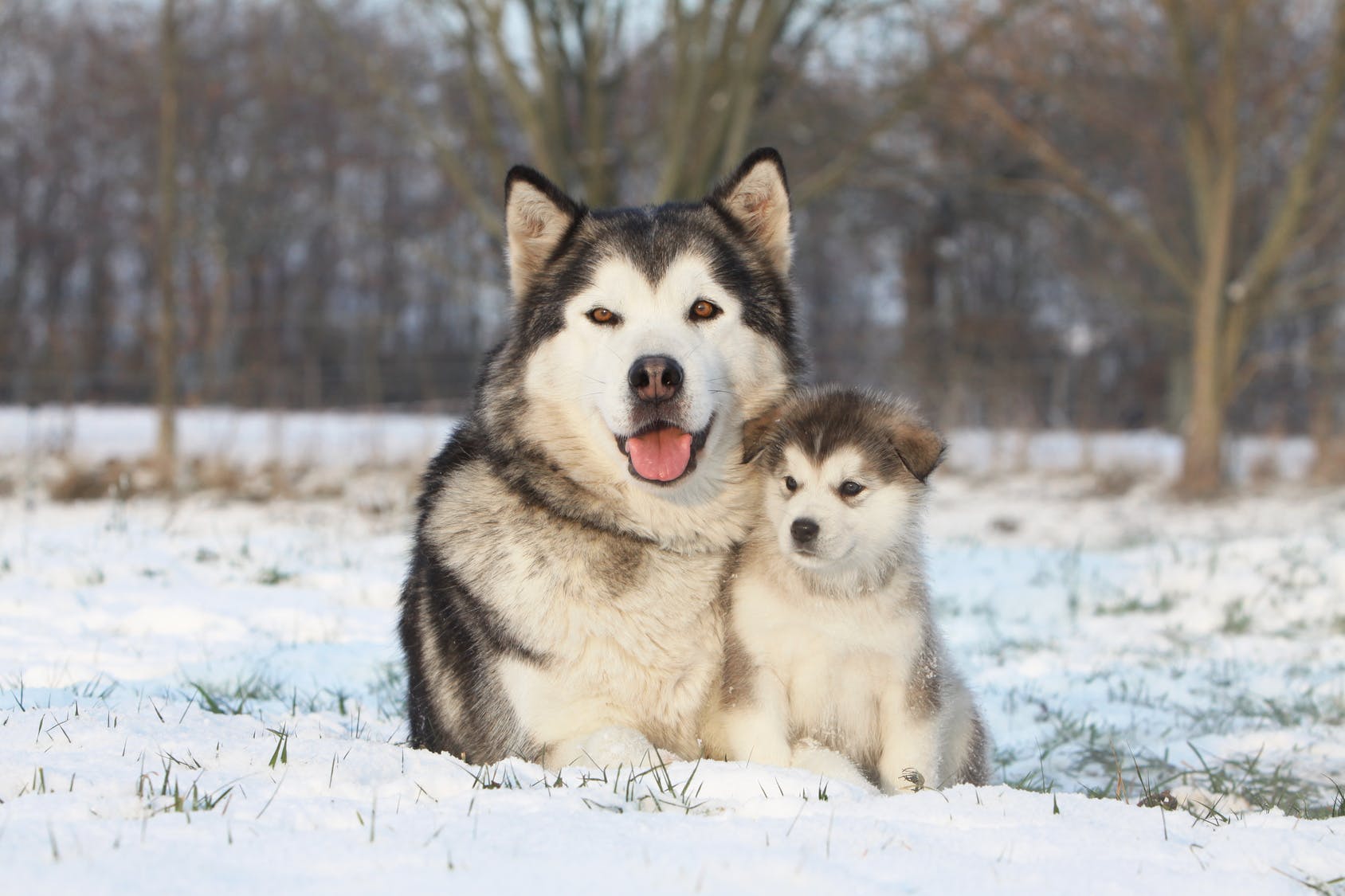 The Alaskan Malamute had a prominent role with their human companions – as a utilitarian dog, working, hunting, and living alongside humans. The dogs were renowned for their excellent hunting abilities and were used to hunt large predators such as bears. They also aided their owners in finding seals by alerting to seal blow holes. The interdependent relationship between the Mahlemut and their dogs fostered prosperity among both and enabled them to flourish in the inhospitable land above the Arctic Circle.

For a brief period during the Klondike Gold Rush of 1896, the Malamute and other sled dogs became extremely valuable to recently landed prospectors and settlers, and were frequently crossbred with imported breeds. This was often an attempt to improve the type, or to make up for how few true Malamutes were available to purchase.

(AKC) "Breed recognition came in 1935, largely through the efforts of Mrs. Eva B. Seeley. At that time many dogs were of unknown ancestry. Those who appeared purebred were used for breeding, others weeded out. After a few years the registry was closed."

"Losses from service in World War II all but eliminated the breed. In 1947 there were estimated to be only about 30 registered dogs left, so the stud book was reopened. Robert J. Zoller became involved in the breed and took this opportunity to combine M’Loot and Hinman/Irwin dogs with selected Kotzebues to create what became the Husky-Pak line. All modern Malamutes are descended from the early strains, and show combinations of characteristics in greater or lesser degree. Thus the natural differences we see today."

The Malamute dog has had a distinguished history; aiding Rear Admiral Richard Byrd to the South Pole, and the miners who came to Alaska during the Gold Rush of 1896, as well as serving in World War II primarily as search and rescue dogs in Greenland, although also used as freighting and packing dogs in Europe. This dog was never destined to be a racing sled dog; it was used for heavy freighting, pulling hundreds, perhaps thousands of pounds of supplies to villages and camps in groups of at least four dogs for heavy loads.

In 2010 the Alaskan Malamute was named the official state dog of Alaska.

The Alaskan Malamute, one of the oldest Arctic sled dogs, is a powerful and substantially built dog with a deep chest and strong, well-muscled body. The Malamute stands well over the pads, and this stance gives the appearance of much activity and a proud carriage, with head erect and eyes alert showing interest and curiosity. The head is broad. Ears are triangular and erect when alerted. The muzzle is bulky, only slight diminishing in width from root to nose. The muzzle is not pointed or long, yet not stubby. The coat is thick with a coarse guard coat of sufficient length to protect a woolly undercoat. Malamutes are of various colors. Face markings are a distinguishing feature. These consist of a cap over the head, the face either all white or marked with a bar and/or mask. The tail is well furred, carried over the back, and has the appearance of a waving plume.

There is only one known health survey of Alaskan Malamutes, a 2004 UK Kennel Club survey with a small sample size of 14 dogs.  The median lifespan of 10.7 years measured in that survey is typical of a breed their size; however, this study had a sample size too small to be considered reliable and much anecdotal evidence suggests they have on average one of the longest lifespans of large dogs, up to 15 years. The major cause of death was cancer (36%). The most commonly reported health problems of Alaskan Malamutes, in the 2004 UK Kennel Club survey (based on a sample size of 64 dogs) were musculoskeletal (hip dysplasia), and hereditary cataracts. There are additional health issues in the breed whose origins are unknown at this time including varied seizure disorders found in young puppies as well as adults, epilepsy, congenital heart problems, kidney problems and skin disorders. Other health issues in Malamutes include Elbow dysplasia, inherited polyneuropathy, osteochondrodysplasia, cerebella hypoplasia, heart defects, and eye problems (particularly cataract and progressive retinal atrophy). A growing problem among arctic dog breeds, including the Alaskan Malamute, but especially their cousin, the Samoyed, is canine diabetes with onset occurring typically in middle age (5 to 7 years).

Hardy working dogs, Alaskan Malamutes are really just great big puppies. Though they take their jobs pulling sleds or searching out lost humans very seriously, they love to run, romp and play and have a never-ending energy reserve. Their playful, easy-going nature and friendliness toward strangers makes them a great family companion.

This breed requires a lot of activity in order to stay happy. Malamutes who do not get enough exercise will let their owner know by barking, howling, or becoming destructive. As sled dogs, their endurance is what makes them appealing. They can haul heavy loads for miles, requiring few stops for rest and food. As family dogs, their endurance means Alaskan Malamutes can become a challenge. At least one hour of vigorous exercise per day is recommended for this breed. They should not be kept in a warm climate as they can dehydrate very easily. As the name suggests, this breed hails from the far north, and they love cold weather and playing in the snow. Malamutes should live in a house with a fenced in yard, as their yen for adventure can lead them to scale fences. Families with children should welcome an Alaskan Malamute. They are patient enough to handle children climbing all over them, and energetic enough to keep up with children engaged in rumpus outdoor play. However, small children can be in danger of getting knocked over by a Malamute, so adult supervision is required.

Though they instinctively love to work, Alaskan Malamutes are difficult to train in the home. Independent and willful dogs, a patient, consistent hand is needed when working with this breed. They like to be in charge, so the moment they see an opening to manipulate a situation, Malamutes will take it. Their high endurance level made them the ideal choice for sled races and northern expeditions. Admiral Byrd famously used Alaskan Malamutes in his North Pole expeditions because of their high energy and endurance levels. They are also used in search and rescue missions across the north, including avalanche missions.

Howling is guaranteed when an Alaskan Malamute is left alone, so families who live in close proximity to other people should think twice about adopting one. Separation anxiety is also common, as the Malamute loves to be with his people. Proper exercise and activity will prevent this problem from growing. Food aggression is also common in the Alaskan Malamute, and difficult to train out of them. Children should be taught never to disturb this dog while he is eating.

Malamutes shed daily, so regular brushing two to three times per week is necessary to keep things under control. Twice a year the Malamute will shed heavily, and they lose their fur in clumps. Using a heavier brush during season changes can keep the mess to a minimum. Other than brushing, regular nail clippings, teeth and ear cleanings, Malamutes are very low maintenance. Like felines, they keep their fur naturally clean, so they only require baths a few times per year. No trimming or stripping of the coat is required.