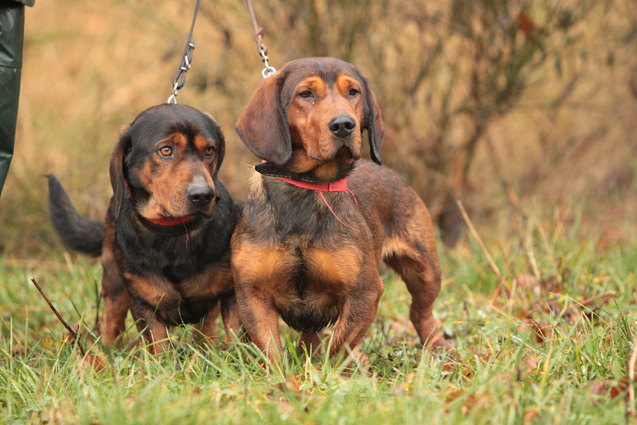 Alpine Dachsbrackes, as with the other Bracke, can be dated back to the middle of the 19th century. The Dachsbrache were bred down in size by crossing the larger dogs with Dachshunds. It once was a favorite of German royalty. During the 1880s, Alpine Dachsbrackes accompanied Crown Prince Rudolf of Habsburg on hunting trips to Egypt and Turkey. The Fédération Cynologique Internationale recognizes the Alpine Dachsbracke in Group 6 Scenthounds, Section 2 “Leash Hounds” with the Bavarian Mountain Scenthound (Bayrischer Gebirgsschweisshund, no. 217) and the Hanoverian Scenthound (Hannover'scher Schweisshund, no. 213). The only major kennel club in the English-speaking world to recognise the Alpine Dachsbracke is the United Kennel Club (US) in their Scenthound Group, but they use the Fédération Cynologique Internationale breed standard. The breed is also recognized by a number of minor registries, hunting clubs, and internet-based dog registry businesses.

This small dog has a slight resemblance to a Dachshund, with short legs (although longer than a dachshund’s) and a long body. The coat is dense, short but smooth except for the tail and neck. The round eyes have a lively expression. Being very sturdy, the Alpine Dachsbracke is visibly robust and has a big boned structure.

The Alpine Dachsbracke is not known to suffer from any genetic diseases, though they are prone to back injuries do to their elongated backs. This breed also has a risk for hip dysplasia as well as other musculoskeletal issues – especially if the dog becomes obese.

Used effectively to track wounded deer, this breed could work even in harsh terrain and high altitude. It makes a good companion, although it is primarily a hunter and therefore is kept mostly by hunters. It has a fearless, friendly and intelligent personality. Most Alpine Dachsbrackes are excellent with children and good with dogs and other pets, though they may exhibit a strong prey drive typical of many scent dogs.

As you might expect from a hunting breed, the Alpine Dachsbracke is intelligent. This makes training fairly easy, though you do need to keep an eye out for independent or obstinate tendencies. This breed responds well to positive reinforcement training and they love having a job to do, especially if it involves hunting. Training is needed to control this breed’s strong prey drive, though they are generally not aggressive with people or other dogs. This breed does benefit from early socialization, especially if you plan to keep it as a family or household companion.

Developed as a hunting breed, the Alpine Dachsbracke has a fairly strong prey drive so they are likely to chase cats and other small household pets. In terms of temperament, however, this breed is gentle and friendly, though they can become destructive if they don’t get enough physical and mental exercise. The Alpine Dachsbracke can adapt to apartment life with adequate daily exercise and this breed makes a great family companion. This dog is also fairly sociable, so he is likely to get along with other dogs.

The Alpine Dachsbracke is similar in appearance to the Dachshund with his short legs and long snout, though he is much sturdier and several inches taller. This breed has a thick top coat with a dense, close fitting undercoat to protect him in the cold weather of the Austrian alpine. The Alpine Dachsbracke comes in various shades of red and reddish brown, frequently interspersed with black hairs. The breed may also exhibit darker markings on the head, chest, legs, feet, and tail. This dog sheds moderately and it should be brushed several times per week and bathed as needed.