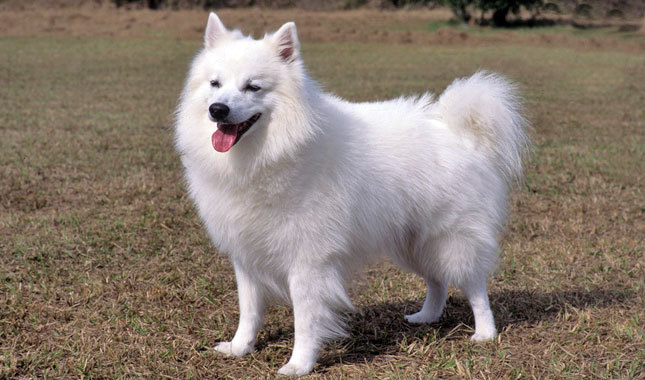 Although white was not always a recognized color in the various German Spitz breeds, it was generally the preferred color in the US. In a display of patriotism in the era around World War I, dog owners began referring to their pets as American Spitz rather than German Spitz.

After World War I, the small Spitz dogs came to the attention of the American public when the dogs became popular entertainers in the American circus. In 1917, the Cooper Brothers’ Railroad Circus featured the dogs. A dog named Stout's Pal Pierre was famous for walking a tightrope with the Barnum and Bailey Circus in the 1930s, and also contributing to their popularity, they sold puppies after the show. Due to the popularity of the circus dogs, many of today's American Eskimo Dogs can trace their lineage back to these circus dogs.

The American Eskimo is a hardy breed with an average life span of 12–15 years. This breed tends to become overweight easily, so proper diet and exercise is needed to maintain an overall well being. Health testing should be performed by all responsible breeders and anyone purchasing a puppy should be aware of the genetic problems which have been found in some individuals of the breed, such as PRA (Progressive Retinal Atrophy), luxating patella, and hip dysplasia). None of these problems are common and the breed is generally very healthy. In addition to the rarer problems mentioned, the breed can have a tendency towards allergies and most commonly, tear-staining. This breed also is known in some cases to have dental issues.

Happy and always energetic, the American Eskimo dog loves to run, play, learn new tasks and solve problems. As the name suggests, this breed especially loves playing in the snow, so they make a perfect companion for families who live in cooler climates. They are vigilant, with a keen ear, and make excellent watchdogs. They are patient and loving with children, and their good nature make them a fine match for first-time dog owners.

The American Eskimo Dog needs a lot of exercise and play time. They are intelligent and creative problem-solvers so if they don't get enough activity, they can find creative (and often destructive) ways to entertain themselves when the family is away. This dog is best suited for families with fenced-in yards and plenty of room to run. Apartment-dwelling folks will find their American Eskimo will become bored, depressed and constructive. The American Eskimo Dog is good with children, and will happily engage in playtime with them. They can be rambunctious, so parents should keep an eye on small children, so they don't get knocked over.

This breed is easily trainable, and famous for learning tricks, but if they sense they can gain a bit of control, they will take it. Confident leadership is necessary to keep the chain of command in tact with this breed. Their high intelligence can also make them manipulative, so “pushover” parents beware. Positive reinforcement is the best method to employ when training and American Eskimo Dog, and once basic obedience training is complete, they should be enrolled in advanced courses to keep their minds stimulated. They do not need to be trained as watchdogs, as they will inherently protect their territory, but unlike other breeds, they rarely develop aggression. Even so, they should be socialized at an early age, just to be safe.

Barking is common among American Eskimo Dogs, especially when left alone. Their bark is very high pitched and can be an annoyance to neighbors. They also bark at the sight of any oncoming person or object. They can be trained to obey a stop barking command, but rarely can the desire to start barking be trained out of them. Because they crave companionship, American Eskimo Dogs can develop separation anxiety. Ensuring he has enough exercise and activities to keep him busy while the family is away, can prevent this problem from developing.

American Eskimo Dogs have thick double coats that sheds 365 days a year and completely blows twice a year. But despite the shedding and the white fur, their coats are very easy to maintain. Brushing is required at least twice per week in order to cut down the amount of fur left around the house and to keep the dog's coat from matting. The oils in the dog's fur act as natural dirt repellants, and brushing also helps to keep the dog clean. This breed only requires bathing a few times per year – frequent bathing can strip the natural oils from the body and cause their skin to become very dry and irritated. Eskies have sensitive skin, and if owners opt to shave their dog in the summer months, care is required to prevent sunburn. Eskimos do not require trimming or stripping of the coat.

Additionally regular ear cleanings, teeth cleanings and nail clippings are required for both health and appearance.