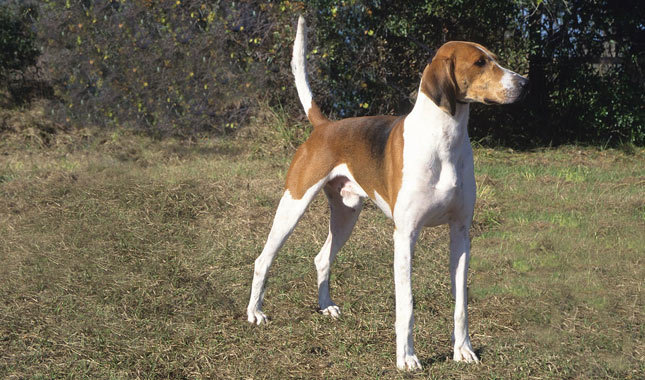 In 1650, Robert Brooke sailed from England to Crown Colony in North America with his pack of hunting dogs, which were the root of several strains of American Hounds. Dogs of this bloodline remained in the Brooke family for nearly 300 years. George Washington received French Foxhounds, Grand Bleu de Gascogne, (which look much like an American Bluetick Coonhound) as a gift from the Marquis de Lafayette. Many of the dogs Washington kept were descended from Brooke's, and when crossed with the French hounds, helped to create the present day American Foxhound. The American Foxhound is known to have originated in the states of Maryland and Virginia, and is the state dog of Virginia. Though there has long been a rumor that the new breed was originally used for hunting Indigenous peoples of the Americas, this is not true. The breed was developed by landed gentry purely for the sport of hunting foxes. With the importation (or migration) of the red fox, Irish Foxhounds were added to the lines, to increase speed and stamina in the dog, qualities still prevalent in today's dogs. One quality that the American Foxhound is famous for is its musical bay that can be heard for miles. This is actually one reason why this breed does not do well in city settings. The breed was first recognized by the American Kennel Club in 1886. Today, there are many different strains of American Foxhound, including Walker, Calhoun, Goodman, Trigg, July and Penn-Marydel. Though each strain looks quite different, they are all recognized as members of the same breed. Most show hounds are Walkers, many of the pack hounds (used with hunting foxes on horseback) are Penn-Marydel and hunters use a variety of strains to suit their hunting style and quarry.

A large, handsome hound, The American Foxhound is a bit taller and lighter than his English cousin. The front legs are long and very straight. The ears are broad and pendant, are set close to the head and frame the face. The eyes of the American foxhound are brown or hazel in color, are large, wide set, soft and have the classic gentle, pleading expression of all hound dogs. The short, hard coat may be any color. The head is long with a slightly domed skull. The tail makes an upward curve, like a sickle.

This breed is not generally a breed that carries genetic disorders. However they can easily become overweight when overfed. A minor health risk in American Foxhounds is thrombocytopathy, or platelet disease. This comes from poorly functioning blood platelets and can result in excessive bleeding from minor bumps or cuts. The treatment is usually based on the severity of the disease. Owners will often have their American Foxhounds undergo blood tests so that the condition can be caught early on. While dysplasia was largely unknown in Foxhounds, it is beginning to crop up occasionally, along with some eye issues. It is not typical or customary for Foxhound breeders to screen for any hereditary disorders at this time. The breed's lifespan is generally 10–12 years. The American Foxhound is an energetic breed. According to some veterinarians and trainers, it needs plenty of exercise, for example, a fairly long walk followed by a game of fetch.

Foxhounds are an excellent dog for active, rural families. They love being outdoors and have the endurance to keep moving all day long – and then move some more. Foxhounds get along great with children and other dogs (cats should be kept away, however), and if possible, should be raised alongside other dogs. Foxhounds are incredibly versatile – after spending all day in the field hunting with the guys, they'll come home and romp with the kids, then sleep at mom's feet when it's time to go to bed.

Foxhounds were designed for stamina in the hunting field, and modern Foxhounds still have that never-ending energy reserve. Expect to vigorously exercise this breed at least one hour per day. Those who are not hunters or who do not already jog, hike or bike daily should look to another breed, as should apartment or condo dwellers. If a Foxhound isn't getting enough exercise he'll let you know. Destructive behavior, excessive barking and baying and neurotic tendencies are all red flags that a Foxhound needs more activity. Foxhounds are hard working hunting dogs and can be utilized as trackers in the field. They can move for hours on end without getting tired, and once they catch a scent they become 100% focused on tracking it. This trait can backfire in home life, so when Foxhounds aren't in the hunting field they should be kept on a leash or in a fenced-in area to keep them safe. Foxhounds do best in multiple-dog homes. While they enjoy the company of people, they only truly thrive around other dogs, so adopting two at a time would be the most ideal situation for a Foxhound.

Foxhounds are moderately easy to train, as are most hound breeds, but the trainability of individual Foxhounds varies. Some are easier to train whereas others are downright difficult. In general, they don't have the longest attention spans, so training should be conducted in short spurts and should not be overly repetitive. Patience is the key ingredient needed when training any type of hound, and calm-assertiveness is also important. Treating a Foxhound harshly will only lead to avoidance behaviors and flat out stubbornness. Once leadership is established and basic obedience is mastered, Foxhounds can be graduated to advance obedience, tracking, or agility activities.

Foxhounds will bay and howl, especially at night and when left alone. This is just part of their hound dog nature and can be difficult, if not impossible to train out of them, and suburban neighbors might not be understanding of this behavior. If a Foxhound is not properly exercised, separation anxiety is almost guaranteed to develop. It is imperative that this breed be properly exercised and left with interesting activities when alone to stave off boredom and anxiousness. Companion dogs can help, but if the Foxhound has pent-up energy to burn off, the companion won't do a thing to save your furniture.

Grooming the American Foxhound is a breeze. They shed lightly year round, but weekly brushing with a hound mitt is enough to keep loose hair under control. Only bathe as needed, when the dog is dirty or begins to smell. Individual dogs will determine how often bathing is necessary. Check the ears on a regular basis for signs of wax buildup, irritation or infection. Clean the ears with a cotton ball and a veterinarian-approved cleanser. Trim nails once per month, if the dog does not wear down the toenails naturally outdoors. Brush teeth weekly (or more) to prevent tartar buildup, promote gum health, and keep bad breath at bay.