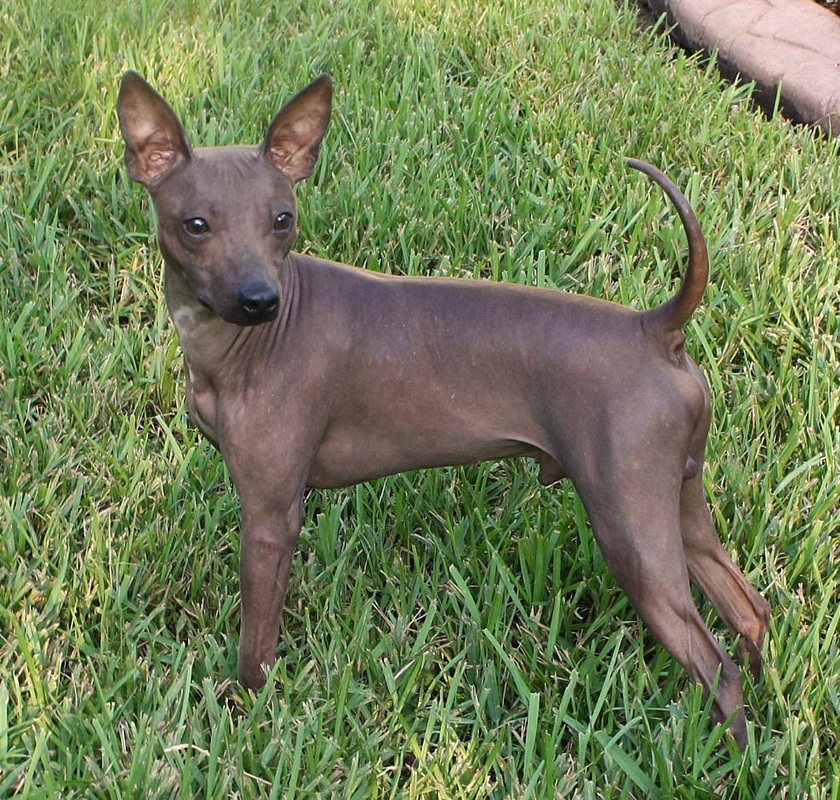 The American Hairless Terrier's American ancestry begins with the mixed breed terriers called Feists brought from Europe to North America as early as the 18th century. In the late 1800s the Rat Terrier breed was developed from the Feist by the addition of Beagle, Italian Greyhound and Miniature Pinscher bloodlines.

The distinct American Hairless Terrier breed began in 1972 when one hairless puppy named Josephine appeared in a Rat Terrier litter in the state of Louisiana, United States. Owners Edwin and Willie Scott liked the dog's look and temperament, and upon maturity bred her hoping to reproduce the hairless quality. They were eventually successful; a litter produced in 1981 provided the foundation stock of the breed.

In 1998, the breed gained recognition as the American Hairless Terrier (AHT) by the American Rare Breeds Association and the National Rat Terrier Club. Canada was the first country outside the US to gain recognition, by Canadian Rarities in 1999. In 1999, the breed was recognized as Rat Terrier, Hairless Variety by the United Kennel Club.

On January 1, 2004, the United Kennel Club (UKC) recognized the AHT as a distinct breed.

Despite its smaller size, the AHT is not a toy breed. Rather, like its Rat Terrier cousin, the AHT is a working breed.

In January 2016 the American Hairless Terrier was recognized fully by the AKC in the terrier group.

The American Hairless Terrier is a small to medium sized, smoothly muscled and active terrier. Ancestors of the breed were bred to hunt rats and other vermin. The lack of coat on the hairless variety of the American Hairless Terrier renders them unsuited for most hunting activities. They have, however, retained a strong hunting instinct and excel in many other activities and sports. The breed is energetic, alert, curious and intelligent.

The American Hairless Terrier continues to be a rare breed with a limited breeding stock. The UKC recognizes the need to continue to breed in Rat Terrier blood lines (see "Coated American Hairless Terrier") until "breed of breeds" (also, see "Genetics" above). Although often stated otherwise, AHTs do not have sweat glands. However, after physical exertion or in warm temperatures, the breed exhibits dermal evidence of moisture along the spine, typically lower spine. There is no scientific evidence to suggest an independent evolution of sweat glands unique to this breed. The mis-perception has likely arisen from the presence of sebaceous glands associated with hair follicles. These are the same glands that are present in all canines. The hairless variety of this breed has the same follicles, however the "hair" is lost early on as the dog matures.

Rashes due to grass allergies are not entirely uncommon. Other allergies may occur as well, but this is no different from most other breeds of dogs. Due to their lack of hair, they may need protection from the sun (based on the season, their geographic location and the individual dog's degree of pigmentation or lack thereof). If needed, sunscreen can be applied or a light shirt may be worn. Clothing is oftentimes used, not only for the protection from the sun but from the cold as well (where the climate warrants). It is, however, important to keep the skin clean with regular, possibly daily depending on application of sunscreen or moisturizers, bathing with gentle soap to prevent infections in the skin pores (acne).

The American Hairless Terrier (AHT) is an intelligent, curious, and energetic breed. Graceful and elegant, the American Hairless Terrier is also strong and athletic. The AHT enjoys participating in agility games like its other terrier cousins. The AHT typically likes to dig, chase small game and will bark when alarmed and will act as a good watch dog. The AHT is not a strong swimmer and should be monitored around water. Its ancestry gives the AHT a strong hunting instinct, but its lack of coat makes it a less likely candidate for a hunting dog as rough underbrush may hurt the AHT's unprotected skin. As a breed founded by working dogs, the prey drive is strong in many AHTs. This has led to debate among owners as to whether or not AHTs are appropriate for families with young children. Anecdotal evidence suggests that AHT's can be trained to be less aggressive to children, especially if the dog is shown that it may not dominate a child. Due to the small size of many AHTs, they can be hurt if roughly handled. Positive reward is the most effective form of training, however, some AHT require a more care-giver dominant approach to correction in giving the AHT direction.

The AHT is well known for its propensity for fewer allergic reactions than other breeds, allowing them into homes once denied. This combined with their intelligence and ease of care make them perfect companions while maintaining the drive to excel in performance events.

The breed enjoys challenging games and outdoor romps. They need to be taken on a long daily walk. Easy Training: The American Hairless Terrier breed is curious, intelligent and fairly easy to train. Like many small breeds, they can become destructive in the home if proper dominance is not established. The American Hairless Terrier requires a consistent and firm pack leader.

Occassional barks. Good with Kids: This is a suitable breed for kids and is known to be playful, energetic, and affectionate around them. The AHT will do OK in an apartment so long as they get at least 20-30 minutes of exercise a day. They are fairly active indoors and should have at least a small to medium sized yard. AHTs love to dig. Since they have sweat glands they do not drool at the mouth or pant in order to balance their body heat. They should wear a sweater in cold weather.

The only special care required is preventing sunburn and keeping them warm in cold weather. They should be bathed one to three times a week; owner’s preference. Their nails should be trimmed weekly. If their skin becomes dry, lotion (without lanolin) can be applied. This breed obviously does not shed and they do not get fleas, but they do shed skin cells about every 20 days, therefore there is some dander but it is very minimal. AHTs forget they do not have any hair and romp around outside. Scratches and cuts do happen and they need to be attended to with hydrogen peroxide or any other antiseptic agent.This breed is very good for allergy sufferers. Many AHT breeders have experiences doing hands-on and remote allergy tests with people who have allergic responses to dogs and more often than not, individuals who cannot tolerate even those breeds that are known to be 'hypoallergenic' can tolerate an AHT. Studies have found them to be the best breed of dog for people with dog allergies. Many breeders can recount stories of grown men crying at the prospect of owning a dog for the first time in their lives. For those individuals and families who have never owned a dog before either due to their own allergies or a family member’s, holding a dog for the first time without a reaction is a rather powerful feeling for them!