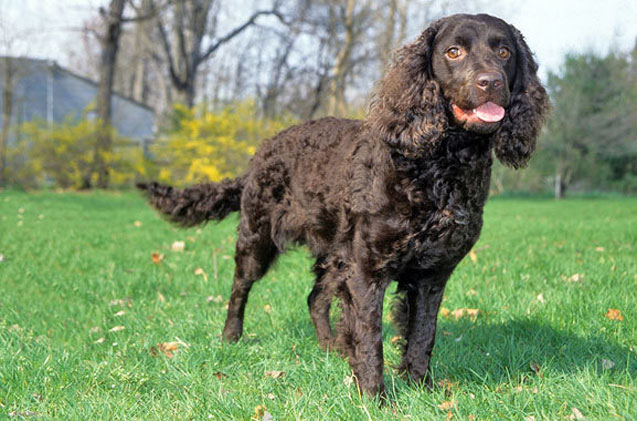 Developed in the United States, the American Water Spaniel is the Wisconsin state dog. The breed originated in the areas along the Fox River and its tributary the Wolf River during the early 19th century. Hunters needed a dog that could work on both land and water, a versatile hunter skilled at bringing in a variety of game. Hunters also wanted a hunting dog compact enough to be transported in a small skiff, one that was able to withstand Wisconsin's cold water temperatures. Breeds involved in the creation of the American Water Spaniel are thought to have included the English Water Spaniel, Irish Water Spaniel, Curly Coated Retriever, native Indian Dogs, the Poodle, and either the Sussex Spaniel or another type of field spaniel.

The breed has links to the Boykin Spaniel, and is thought to have been the main breed used to develop the Boykin. The differences between the Boykin and the AWS are negligible with some dog historians suggesting that the original Boykin, called "Dumpy", who was found on the streets of Spartanburg, South Carolina, was actually an American Water Spaniel who had been misplaced in transit. However the breed clubs for the Boykin do not agree with this account.

The breed was made the state dog of Wisconsin in 1985. The American Water Spaniel remains a rare breed. During 1998 only 233 puppies were registered with the AKC, with an estimated 3,000 dogs in existence mostly around the Midwestern United States, in particular in Wisconsin, Minnesota and Michigan. In 2010, the breed was ranked 143rd most popular breed in the United States, out of 167 breeds. This is a decrease since 2000, when the breed was ranked 125th. The dogs are not classified specifically as either retrievers or as spaniels and so may not compete in AKC field trials, but may compete in AKC hunt tests (spaniel and retriever tests) and retriever hunting tests sponsored by the AWSC, the breed club in the United States. The American Water Spaniel Field Association was set up in 1993 by breed enthusiasts supporting AKC Spaniel classification and looking to provide field training opportunities to owners of the breed. In a vote held of members of the AWSC in 1999, they chose to keep the breed unclassified.

Pack breeding early in its development led to a level of genetic variation, so the hereditary conditions of more popular breeds are not common in the AWS. The breed however is known to suffer from eye issues including cataracts and progressive retinal atrophy. Inheritance is suspected in both conditions, with the average age of cataract onset at under one year old. Additional concerns are hypothyroidism, allergies, epilepsy, diabeties and glandular disorders which may cause baldness. The hair loss occurs at around six months of age, affecting the neck, thighs and tail; however the frequency has been reduced through work conducted by the breed clubs. Hip dysplasia is seen in around 8.3% of the breed, according to surveys conducted by the Orthopedic Foundation for Animals over a twenty five-year period between 1974 and 1999. This was one of the lower results of the sporting breeds, with Greyhounds coming lowest with 3.4%, and the related Boykin Spaniel coming in second highest at 47%. There was no evidence of elbow dysplasia found.

American Water Spaniels are friendly dogs with a great desire to please. A true family dog, they will run and play with children, but will also relax on the lap of an adult at the end of a hard day. As the name suggests, this breed loves to swim and retrieve in water, as well as on land. They crave companionship with people and like to be included in outdoor activities.

This active breed needs plenty of exercise and enjoys running, hunting and swimming. Their medium size may be appealing for apartment dwellers, but too much confinement can lead to chewing and other destructive behavior. While they enjoy long walks, this breed needs space to run. Families with yards to run in, or pools to swim in are ideal matches for the American Water Spaniel. American Water Spaniels are good with children. They are patient, and open to rumpus playing. They will snap, however, if startled, so children should be taught never to disturb a sleeping dog, and never approach a dog from the rear.

Intelligent and eager to please, the American Water Spaniel is easy to train. Harsh discipline can cause them to distrust people, so a confident, but gentle positive-reinforcement strategy works best. There is no need to train the American Water Spaniel to fetch. They are born with the innate desire to chase, hunt, and retrieve, and can spend hours engaged in this activity. Once basic obedience training is completed, this breed should be enrolled in advanced training, or agility training to keep them challenged and mentally stimulated. Unlike other breeds of spaniels, the American Water Spaniel is wary of strangers. They will bark to alert a stranger's arrival, but can can grow to be distrusting of strangers, if not properly socialized. The earlier this breed is exposed to new people and new situations, the more easy-going they will be in adulthood.

Because they crave companionship, American Water Spaniels can develop separation anxiety, barking or howling behaviors, especially if they are bored or left alone for long periods of time. Plenty of exercise and play can stave off boredom while the family is away. This breed is very vocal. They bark when they are happy, they bark to get attention, they bark when left alone. They are also prone to whining and howling. If corrected early in puppyhood, these behaviors can be kept in check.

Water Spaniels shed lightly throughout the year and heavily twice a year during season changes. Regular brushing can help remove the loose, dead hair and keep floors and furniture neat. Some people prefer to trim the coat, while others leave them naturally wavy. The coat of the AWS is naturally very oily to repel water and dirt in the field, so they often leave oil spots on walls and furniture. Bathing should only occur when needed – over-bathing a Water Spaniel will strip the natural oils from the coat and leave the dog with dry, irritated skin. Their pendant (hanging) ears are prone to infection, so weekly cleaning with at cotton ball and a veterinarian-approved solution can keep bacteria at bay.