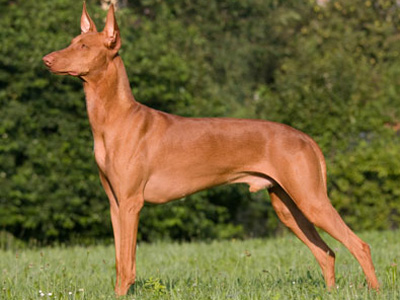 Despite being a native ancient breed, it was not until 1990 that it entered the world of official cynology with the formation of a breed club to promote the development of breed standards. Phillipe Bloque-Rentón and colleagues at the University of Córdoba's veterinary medicine faculty undertook the research work required to specify the breed; their study, presented at the second Simposium de las razas caninas españolas (Spanish dog breeds symposium) in 1992, was recognized by Real Sociedad Canina de España (Royal Spanish Dog Society, RSCE) in April of that year as a defining breed standard. In Spain, Andalusian hounds were included within Group V - Spitz and Primitive Types, under Section 7, Primitive type - Hunting dogs. However, the breed is recognized neither by the Fédération Cynologique Internationale (FCI) nor by any other international dog breeds association, due to the large number of matches with the Portuguese Podengo standard — a fact which casts doubt on its claim to be regarded as a separate breed.

In January 2015, the Andalusian Hound was nationally recognized in Germany.

As an ancient breed, the Andalusian Hound is not prone to many serious health problems. Some of the conditions that have been seen to affect this breed include ear infections, eye conditions, and arthritis.

The Andalusian Hound is an intelligent breed and it can sometimes be a little over-energetic, though these dogs typically do fine when they get enough daily exercise. These dogs are playful and cheerful in the home and the smaller versions of the breed generally do well with children. This dog has a natural desire to please and does well with a strong authority figure. Andalusian Hounds can be somewhat protective and suspicious of strangers, so they make good watchdogs.

The Andalusian Hound was developed for hunting hare, so these dogs have high stamina and fairly high energy levels. This breed requires a long daily walk and will appreciate having additional time to run in a fenced yard.

As is true for all dogs, the Andalusian Hound should be started with socialization and training as early as possible. Because this is a hunting breed, it is intelligent and typically responds well to firm and consistent training. This dog is not easily frightened or intimidated so they require a handler who will be an authority figure. This hound can be socialized and trained to work alongside other breeds but no amount of training will eliminate their prey drive, so they may not do well in homes with cats and other small pets.

The Andalusian Hound has a compact but muscular build befitting a hunting breed. Not only does it come in three distinct sizes, but it also comes in three separate coat types – wirehair, longhair, and smooth. None of the three varieties have an undercoat but regular brushing is encouraged to reduce shedding and to prevent matting in longer coats. Coat colors for the Andalusian include various shades of white and reddish brown.