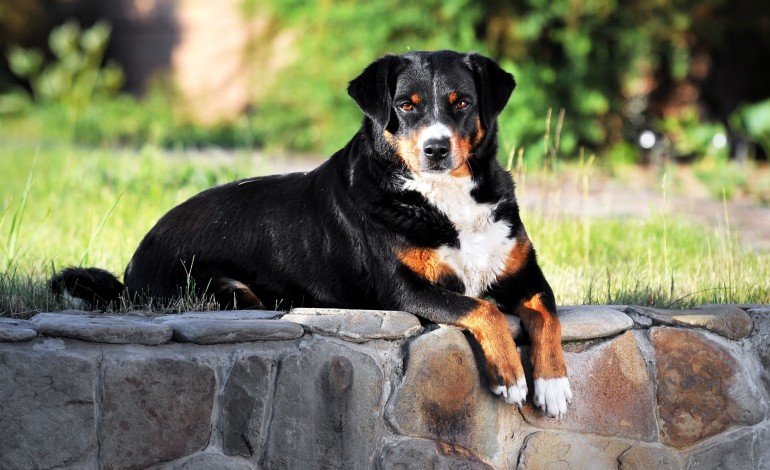 The Appenzeller Sennenhund is descended from the general Sennenhund type which may have existed in antiquity, or descended from "cattle dogs left there by the Romans", but the first breed club for the breed was founded and the stud book for the breed started in 1906 by Albert Heim and others, who wrote the first breed standard in 1916. An early reference to the breed's predecessors was made in an 1853 book, "Tierleben der Alpenwelt" (Animal Life in the Alps), referring to dogs in the Appenzell region. The Appenzeller Sennenhund was only recognised internationally as a separate breed in 1989.

The Appenzeller Sennenhund was originally kept primarily as a cattle herding dog, and a flock guardian. It was also used as a draft dog, and general farm dog. The breed also was known for its affinity to both herd and guard with such devotion that they would give their life to protect their charge. Today the breed is primarily kept as a companion, and excels in agility/flyball competitions, obedience competitions and Schutzhund. They are also still used in many places as working cattle dogs even now. They are highly intelligent, and learn quickly.

The Appenzeller Sennenhund is a medium-size breed of dog, one of the four regional breeds of Sennenhund-type dogs from the Swiss Alps. The name Sennenhund refers to people called Senn, herders in the Appenzell region of Switzerland.

It does not appear that any health studies have been conducted on the Appenzeller Sennenhund.  As a result it is very difficult to make any definitive statements on the breed’s health.  Most fanciers seem to think that the breed is in relatively good health.  It does not seem that the breed suffers from any health problems at significantly higher rates than pure bred dogs in general.  The life expectancy for this breed is claimed to be at between 12 and 13 years, roughly average for a dog of this size, but it is unclear what this estimate is based on. Because skeletal and visual problems have been known to occur in related breeds (hip dysplasia is quite commonly seen) it is highly advisable for owners to have their pets tested by both the Orthopedic Foundation for Animals (OFA) and the Canine Eye Registration Foundation (CERF).  The OFA and CERF perform genetic and other tests to identify potential health defects before they show up.  This is especially valuable in the detection of conditions that do not show up until the dog has reached an advanced age, making it especially important for anyone considering breeding their dog to have them tested to prevent the spread of potential genetic conditions to its offspring.

Although health studies have not been conducted on the Appenzeller Sennenhund, they have been for a number of closely related breeds.  Based on these studies, the breed may be susceptible to the following conditions:

As with all medium to large, very active working dogs, the Appenzeller Sennenhund should be well socialized early in life with other dogs and people and provided with regular activity and training if they are to be safely kept as a pet. If trained properly, they bond closely with their owners and like to seek for attention. As a result of careful regulated breeding, the Appenzeller breed as a whole is an extremely healthy breed, though individual genetic lines vary. The breed is known to have an average lifespan of 13–17 years. According to the breed standard, the Appenzeller Sennenhund are lively, high spirited, athletic and suspicious of strangers. Due to his large size and high energy levels, the Appenzeller Sennenhund is not recommended as an apartment dog.

The Appenzell does not belong in a busy urban environment or in the suburbs if you are not a very active jogging/fast walking type. It does best when it can live on a farm where it has room to run. Its strong herding instincts keep it from running off. It prefers to be outdoors and closely bonds with its territory. If it is not used as a working farm dog it must be taken for really long daily walks or jogs. If you can find work for the Appenzell and provide the leadership all dogs instinctually crave, it will be completely happy.

Easy Training: Appenzell Mountain Dogs learn very quickly. Because of their high intelligence, they really want to have a job to do. They enjoy being outdoor with their handler.

This is a working dog through and through, and possesses both the physical abilities and desire to perform.  The Appenzeller Sennenhund is a very athletic and energetic dog and requires a substantial amount of physical activity.  One of these dogs should probably get at least an hour of vigorous activity every day, and preferably more.  This breed makes an excellent walking and jogging companion, but greatly prefers an opportunity to roam freely in a securely enclosed area.  Breed members that do not receive sufficient exercise are very likely to develop behavioural problems such as extreme destructiveness, hyper activity, excessive barking, over excitability, nervousness, and aggression.  This is a breed that greatly prefers to have a job, or at least a regular task that exercises its mind as well as its body.  Those looking for a dog to compete in agility, obedience, or schutzhund events will probably be very satisfied with one of these dogs, but those looking for a house pet may be annoyed by the dog’s regular demands.  The high energy level of this breed is quite desirable to families looking for a dog that will accompany them on long and arduous adventures through the mountains or the snow.  Appenzeller Sennenhunds are truly country dogs who prefer to have as large of a yard as possible, and most breed members fare very poorly in an apartment environment.

Appenzeller Sennenhunds are a generally low-maintenance breed.  They do not require professional grooming, only a regular brushing.  Other than that, only those routine maintenance procedures that every breed needs, such as nail clipping and teeth brushing, are necessary.  Appenzeller Sennenhunds do shed, and they can shed very, very heavily.  This shedding is usually worst when the seasons change and the dog changes coats.  Regular brushing will help reduce shedding, but this breed is still more than capable of covering clothes, furniture, and carpets with hair.