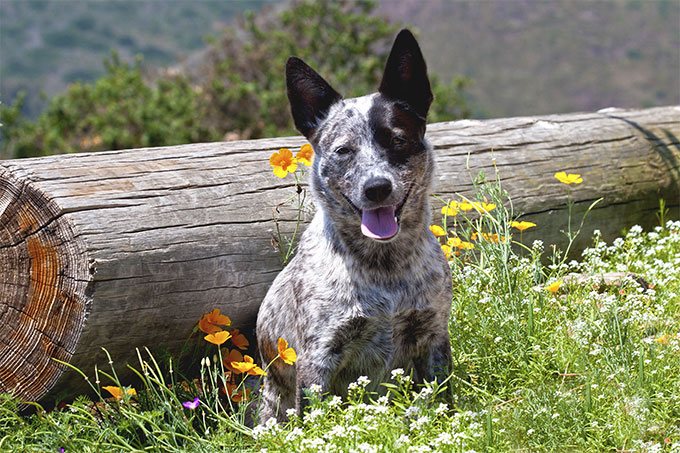 Thomas Hall crossed his Drovers Dogs with dingoes he had tamed, and by 1840 was satisfied with his resulting progeny. During the next thirty years, the Halls Heelers, as they became known, were used only by the Halls. Given that they were dependent on the dogs, which gave them an advantage over other cattle breeders, it is understandable that the dogs were not distributed beyond the Hall's properties. It was not until after Thomas Hall's death in 1870, when the properties went to auction with the stock on them, that Halls Heelers became freely available.

Kaleski's standard was adopted by breed clubs in Queensland and New South Wales and re-issued as their own, with local changes. His writings from the 1910s give an important insight into the early history of the breed. However, dog breeder and author Noreen Clark has noted that his opinions are sometimes just that, and he introduces some contradictory assertions in his later writings, as well as some assumptions that are illogical in the light of modern science. Some of these have persisted; for example he saw the red colour form as having more dingo in it than the blue form, and there is a persistent belief that reds are more vicious than blues. The most enduring of Kaleski's myths relate to Dalmatian and Kelpie infusions into the early Cattle Dog breed. These infusions are not referred to in Kaleski's writings until the 1920s and it seems likely that Kaleski sought to explain the Cattle Dog's mottled colouration and tan on legs by similarity to the Dalmatian and Kelpie, respectively. The genetics of coat colour, and the current understanding of hereditary characteristics, make the infusion of Dalmatian to increase the cattle dog's tolerance of horses an extremely unlikely event. There were relatively few motor vehicles in Australia at the beginning of the 20th century, so most dogs of any breed would have been accustomed to horses. The Kelpie breed was developed after the Cattle Dog type was described, so its infusion is unlikely. It is possible that there was some infusion of Bull Terrier but there is no verifiable record of this, and the Cattle Dog has not had the Bull Terrier's instinct to bite and hold, which would have been an undesirable trait. Early in the 1900s there was considerable in-fighting amongst members of the Cattle Dog Club, and a series of arguments about the origin of the breed appeared in newspapers and journals of the time. While many of these arguments were misleading, some irrational, and the majority not supported by historical facts, they continue to be circulated, resulting in a number of theories on the origins of the breed. In recent years, information technology enabling the manipulation of large databases combined with advances in the understanding of canine genetics has allowed a clearer understanding of the development of the breed.

Australian Cattle Dogs had been classified in the "miscellaneous" category at the American Kennel Club (AKC) since the 1930s; to get the breed full recognition, the AKC required that a National Breed Parent Club be organised for promotion and protection of the breed. In 1967 Esther Ekman met Chris Smith-Risk at an AKC show, and the two fell into conversation about their Australian Cattle Dogs and the process of establishing a parent club for the breed. By 1969 the fledgling club had 12 members and formally applied to the AKC for instructions. One of the requirements was that the Club had to start keeping its own registry for the breed and that all dogs on the registry would have to be an extension of the Australian registry, tracing back to registered dogs in Australia. The AKC Parent Club members began researching their dogs, including exchanging correspondence with McNiven, and discovered that few of them had dogs that could be traced back to dogs registered in Australia. The AKC took over the club registry in 1979 and the breed was fully recognised in September 1980. The Australian Cattle Dog Club of America is still active in the promotion of the breed and the maintenance of breed standards. The National Stock Dog Registry continued to recognise Cattle Dogs without prerequisite links to Australian registered dogs, on the condition that any dog of unknown parentage that was presented for registry would be registered as an "American Cattle Dog", and all others would still be registered as "Australian Cattle Dogs".

The breed gained official recognition from the Canadian Kennel Club in January 1980 after five years of collecting pedigrees, gathering support, and lobbying officials by two breeders and enthusiasts. The small number of Australian Cattle Dogs in Canada at the time were primarily working dogs on farms and ranches scattered across large distances. However, the fledgling breed club held conformation shows, obedience and agility competitions, and entered their dogs in sports including flyball and lure coursing. At the end of 1980, Landmaster Carina was named the first Australian Cattle Dog in Canada to gain both her conformation and obedience titles.

The first registered Australian Cattle Dogs to arrive in the United Kingdom were two blue puppies, Lenthal Flinton and Lenthal Darlot, followed in 1980 by Landmaster Darling Red in whelp. Landmaster Darling Red was imported by John and Mary Holmes, and proved to be an outstanding brood bitch. Over the next few years additional Cattle Dogs arrived in the UK from the Netherlands, Kenya, Germany and Australia, although prior to relaxation of rules regarding artificial insemination, the UK gene pool was limited. In 1985 an Australian Cattle Dog Society was formed and officially recognised by the Kennel Club; before this they had to compete in the category "Any Variety Not Separately Classified". Australian Cattle Dogs were competing successfully in obedience and working trials in the UK during the 1980s.

The general appearance is that of a strong compact, symmetrically built working dog, with the ability and willingness to carry out his allotted task however arduous. Its combination of substance, power, balance and hard muscular condition must convey the impression of great agility, strength and endurance. Any tendency to grossness or weediness is a serious fault.

The Australian Cattle Dog carries recessive piebald alleles that produce white in the coat and skin and are linked to congenital hereditary deafness, though it is possible that there is a multi-gene cause for deafness in a dog with the piebald pigment genes. Around 2.4% of Cattle Dogs in one study were found to be deaf in both ears and 14.5% were deaf in at least one ear. The Australian Cattle Dog is one of the dog breeds affected by progressive retinal atrophy. It has the most common form, progressive rod-cone degeneration (PRCD), a condition that causes the rods and cones in the retina of the eye to deteriorate later in life, resulting in blindness. PRCD is an autosomal recessive trait and a dog can be a carrier of the affected gene without developing the condition.

Hip dysplasia is not common in the breed, although it occurs sufficiently often for many breeders to have their breeding stock tested. The Cattle Dog has a number of inherited conditions, but most of these are not common. Hereditary polioencephalomyelopathy of the Australian Cattle Dog is a very rare condition caused by an inherited biochemical defect. Dogs identified with the condition were completely paralysed within their first year. Based on a sample of 69 still-living dogs, the most common health issues noted by owners were musculoskeletal (spondylosis, elbow dysplasia, and arthritis) and reproductive (pyometra, infertility, and false pregnancy), and blindness. A study of dogs diagnosed at Veterinary Colleges in the United States and Canada over a thirty-year period described fractures, lameness and cruciate ligament tears as the most common conditions in the Australian Cattle Dogs treated.

Australian Cattle Dogs can be imposing figures. Muscular and serious-looking, this working breed takes protection to a new level. Excellent watch dogs, an Cattle Dog is quick sound an alert that a stranger is approaching. Despite their serious nature, this breed loves to run and play, and craves an active lifestyle and affection, letting him know he's done his job well.

This breed is very high energy and should not be confined to an apartment. Leisurely strolls around the neighborhood won't satisfy this dog's need for activity, either. Plenty of room to run is essential to an Australian Cattle Dog, and if he doesn't get it, will develop destructive behaviors. They are ideal farm and ranch dogs as they love to herd and have a never ending energy level. Families who don't live on a farm can have a happy Cattle Dog if they spend plenty of time engaged in interactive games like fetching a tennis ball or catching a frisbee. This breed will want to be included in as many family activities as possible. Cattle Dogs are not an ideal dog for families with small children. While they will bond well with the children in their own families, but they can be wary of strange children. They can be a little impatient with children, even their own human brothers and sisters, so families should take extra care to teach kids how to approach a Cattle Dog.

Australian Cattle Dogs are very strong willed and like to test boundaries. They can also become dominant, so a firm, consistent leader is necessary for training, otherwise this breed will rule the roost. Training and socialization should begin as early as possible to establish the leadership position. If left to his own devices, it can become nearly impossible to train a Cattle Dog later in life. This breed is incredibly fun to watch when they are at work. Though some owners dock the tails of their Cattle Dogs, they have long tails that they use as a rudder to maneuver and change direction on a dime. Short and stocky, they don't appear to be graceful, until they run. They are incredibly fast and agile, and it's as entertaining for people to watch a Cattle Dog run as it is for the cattle dog to be running and herding.

Though their first love is working, the Australian Cattle Dog's second love is his family. This breed loves spending time with people, and should not be chained up outdoors or left alone for long periods of time. They can develop separation anxiety which will almost always be exhibited in destructive behavior. Cattle Dogs are strong, stocky animals and can tear apart a couch in record time. Bred to herd and protect livestock, Australian Cattle Dogs can become fiercely protective of “their” property. They will sound the alert that a stranger is approaching, but if not properly socialized around people, this can lead to aggression. Not only will they alert you to an approaching stranger, but will often bark at the sight of any oncoming foreign object – a car, a bike, the dog across the street, etc. It is important to train a Cattle Dog to obey commands to stop barking.

Australian Cattle Dogs are very low maintenance when it comes to grooming. They shed lightly throughout the year, and twice a year they will shed heavily. During season changes, the dog's undercoat will fall out in large clumps, and the full blowing of the coat only takes a few weeks. Regular brushing will remove the dead hair and keep the dog (and the house) looking neat. Brushing also distributes the natural oils found in the skin and fur, and helps keep the coat shiny and healthy. Bathing only needs to occur on an as-needed basis, when the dog has gotten particularly dirty or begins to emit an odor. Regular ear and teeth cleanings as well as nail trimmings will also contribute to the dogs overall health, well-being and attractive appearance.