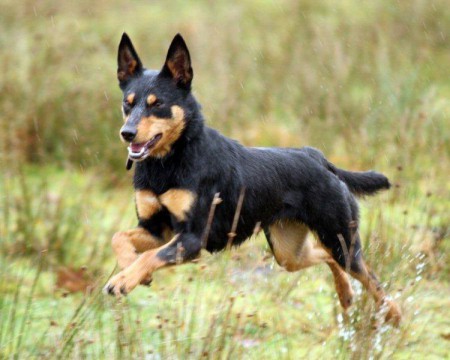 Kelpies are partly descended from Dingoes, with 3–4% of their genes coming from the native Australian dog. At the time of the origin of the breed, it was illegal to keep dingoes as pets, some dingo owners registered their animals as Kelpies or Kelpie crosses. Kelpies and dingoes are similar in conformation and colouring. There is no doubt that some people have deliberately mated dingoes to their Kelpies, and some opinion holds that the best dilution is 1/16–1/32, but that 1/2 and 1/4 will work. As the Dingo has been regarded as a savage sheep-killer since the first European settlement of Australia, few will admit to the practice.

The first dog called a Kelpie was a black and tan female pup with floppy ears bought by Jack Gleeson about 1872 from a litter born on Warrock Station near Casterton, owned by George Robertson, a Scot. This dog was named kelpie after the kelpie, a mythological shape shifting water spirit of Celtic folklore. Legend has it that "Kelpie" was sired by a dingo, but there is little evidence for or against this. In later years she was referred to as "(Gleeson's) Kelpie", to differentiate her from "(King's) Kelpie", her daughter.

The second "Kelpie" was "(King's) Kelpie", another black and tan bitch out of "Kelpie" by "Caesar", a pup from two sheepdogs imported from Scotland. However, challenges have been made[according to whom?] that these two sheepdogs were not from Scotland and may have had dingo blood.[citation needed] "(King's) Kelpie" tied the prestigious Forbes Trial in 1879, and the strain was soon popularly referred to as "Kelpie's pups", or just Kelpies. The King brothers joined another breeder, McLeod, to form a dog breeding partnership whose dogs dominated trials during 1900 to 1920.

There were a number of Kelpies named Red Cloud. The first and most famous was John Quinn's Red Cloud in the early 20th century. In the 1960s, another Red Cloud became well known in Western Australia. This started the tradition in Western Australia of calling all red or red and tan Kelpies, especially those with white chests, Red Cloud Kelpies. Other notable specimens include Gunner and Red Dog (c. 1971 – 21 November 1979), a Kelpie mix which was the subject of a movie, Red Dog, released in 2011.

Kelpies have now been exported to many countries including Argentina, Canada, Italy, Korea, New Caledonia, New Zealand, Sweden, the United Kingdom and the United States for various pursuits.

By 1990, Kelpies have been trained as scent dogs with good success rates. In Sweden they are widely used for tracking and rescue work.

The Kelpie is a soft-coated, medium-sized dog, generally with prick ears and an athletic appearance. Coat colours include black, black and tan, red, red and tan, blue, blue and tan, fawn, fawn and tan, cream, black and blue, and white and gold.

The Kelpie’s breed standard describes him as extremely alert and eager with a mild, tractable disposition and an almost inexhaustible energy. He is noted for his loyalty and devotion to his work. This is a highly intelligent and capable dog. He likes to have a job to do, and whatever it is, he will do it well. Show Kelpies generally excel in agility trials and may be shown in conformation in Australia. Kelpies are great with kids, easy to train but have lots of energy and can be too much for some people.

Australian Kelpies are a medium sized Herding breed that is energetic and active but has an “off” switch. They can do a 5 mile run then settle on the couch with the family to watch a movie.

Start training your puppy the day you bring him home. Even at eight weeks old, he is capable of soaking up everything you can teach him. Don’t wait until he is 6 months old to begin training or you will have a more headstrong dog to deal with. If possible, get him into puppy kindergarten class by the time he is 10 to 12 weeks old, and socialize, socialize, socialize. However, be aware that many puppy training classes require certain vaccines (like kennel cough) to be up to date, and many veterinarians recommend limited exposure to other dogs and public places until puppy vaccines (including rabies, distemper and parvovirus) have been completed. In lieu of formal training, you can begin training your puppy at home and socializing him among family and friends until puppy vaccines are completed. The Australian Kelpie is very intelligent and easily trained. It is a natural herder. Australian Kelpies excel at competitive obedience events and dog agility, but also enjoy simple games of fetch.

Good with Kids: This is a suitable breed for kids and is known to be playful, energetic, and affectionate around them. It is also friendly toward other pets.

Brush the Kelpie’s coat once or twice a week to remove dead hair and keep shedding to a minimum. Some Kelpies have a double coat that sheds heavily in the spring. You’ll need to brush him more often to keep the loose hair under control. Active Australian Kelpies often wear their nails down naturally, but it’s a good idea to check them weekly to see if they need a trim. Otherwise, just keep the ears clean and give him a bath if he gets dirty. Brush his teeth frequently for good overall health and fresh breath.