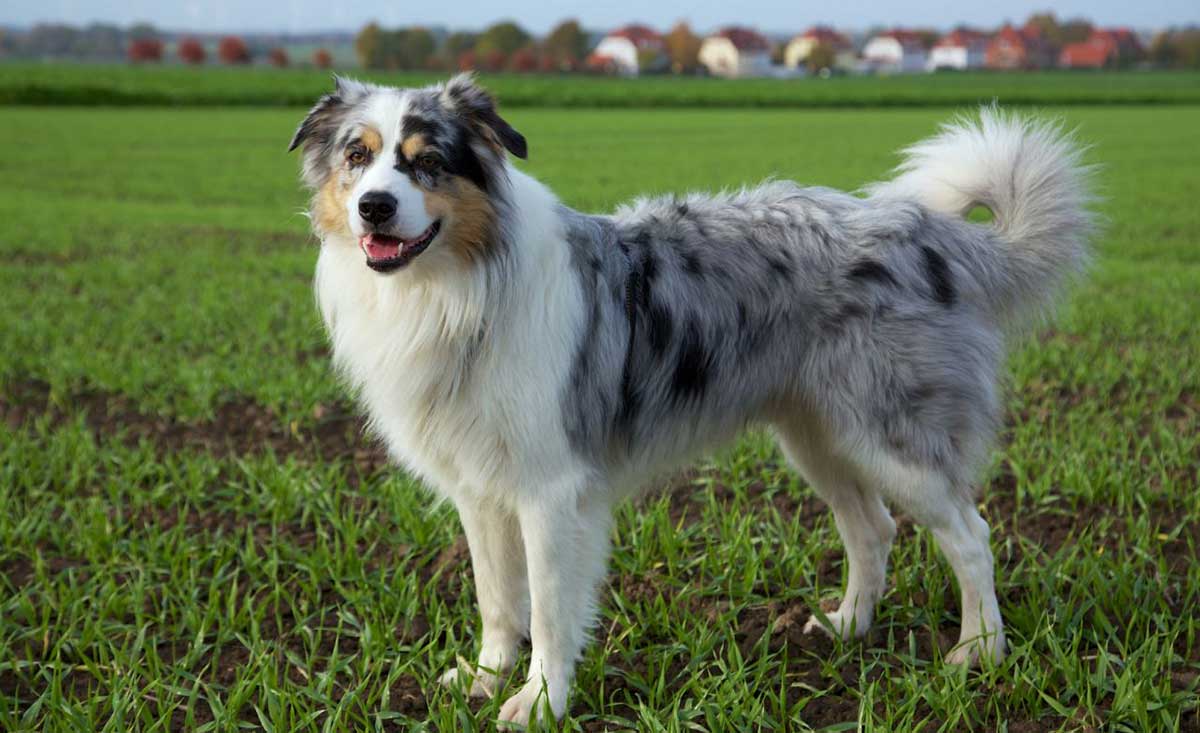 The Australian Shepherd was a particularly tireless sheep herder in the Rocky Mountains because it is relatively unaffected by altitude. Ranchers in Boulder, Colorado, began breeding the dogs which would attract purchasers from as far west as California for their legendary sheep-herding abilities. A theory suggests that they were named for the imported sheep that they herded. It is also possible that many of the dogs coming from Australia were blue merle and the adjective "Australian" became associated with any dogs of that coat color.

Breeds as we know them today did not exist before Victorian times, but local variations of the ancestors of current breeds came into America along with their owners and livestock. Included are some that are now extinct or that have merged into other breeds. These may have included some British herding dogs, native dogs from North America (originating in Asia/Siberia), as well as dogs from Germany and Spain including the Carea Leonés. For many centuries, shepherds were more interested in dogs' working abilities than their appearance. As a result, over time, shepherds interbred dogs that they believed would produce better workers for the given climate and landscape. In the eastern U.S., terrain and weather conditions were similar to that of Europe, so the existing imported breeds and their offspring worked well there.

Selective breeding for many generations focused on aspects of the dog that enabled it to function as an effective stockdog in the American West. It had to handle severe weather; have plenty of speed, athleticism, energy, and endurance; and be intelligent, flexible, and independent; while remaining obedient. The actual foundation for the Australian Shepherd was established between the 1940s and the early 1970s, when the Australian Shepherd Club of America was formed and the registry was started.

Their stunts and skills earned them places in several Disney films, including Run Appaloosa Run and Stub: The Greatest Cowdog in the West. An Australian shepherd was featured in the film Flight of the Navigator (1986) and the TV series Flash Forward (1996). More recently, an Australian Shepherd starred in the film Famous Five (2012) and its sequels.

The Australian Shepherd is an intelligent working dog of strong herding and guarding instincts. He is a loyal companion and has the stamina to work all day. He is well balanced, slightly longer than tall, of medium size and bone, with coloring that offers variety and individuality. He is attentive and animated, lithe and agile, solid and muscular without cloddiness. He has a coat of moderate length and coarseness. He has a docked or natural bobbed tail.

Australian Shepherds can have several health issues. Vision problems are common, and epilepsy is also a concern. In merle-to-merle breeding, the puppies that have inherited two copies of the merle gene have an increased risk of being born blind and/or deaf. Running, playing with another dog, retrieving a ball or Frisbee, swimming or participating in other activities are some ways your dog can get the exercise he needs. If exercise is not provided on a daily basis, your dog may bark or become destructive out of frustration. As a pet owner, your responsibility includes ensuring that your dog has a securely fenced area in which to exercise, or leashing him when exercising in public places.When your Aussie is not being supervised, he should be confined to your home or a fenced area. Working with a responsible breeder, those wishing to own an Australian Shepherd can gain the education they need to know about specific health concerns within the breed. Good breeders utilize genetic testing of their breeding stock to reduce the likelihood of disease in their puppies.

Personality traits of the Australian Shepherd vary from dog to dog. Some can be outgoing and friendly, while others are shy and reserved. Regardless of the individual dog's personality, a few things remain constant. Aussies are highly intelligent, loyal, and thrive on human companionship. Aussies are at their best when they are engaged in interaction with a person, whether it be walking, running, or fetching; and are the perfect companion for an active family.

Australian Shepherds need a lot of physical activity. They are a working breed, so they thrive on learning new tasks and engaging in those tasks as often as possible. Families who are active outdoors will benefit from the company of an Aussie. They are incredibly agile and enjoy games like fetch and catching a frisbee. Apartment dwellers should be cautioned against adopting an Australian Shepherd. Though they are medium in size, they require a lot of exercise and stimulation, and if they don't get it, can become destructive or develop separation anxiety.

One of the most intelligent breeds, Australian Shepherds can be trained to do just about any task put before them. A firm hand is not needed to train this breed; positive reinforcement works just fine. They are a people-pleasing breed and quickly learn behaviors that are consistently rewarded with praise, or a small treat. Aussies excel in simple obedience training, and once they have mastered the basics should be enrolled in an advanced course, or more appropriately, agility training. Training should begin early with Aussies, as their herding instinct can take over and cause havoc. Without setting proper boundaries with this breed, they can try to herd other pets or even children. They should also be socialized as early as possible, as they have a tendency to be standoffish or even aggressive to strangers.

Australian Shepherds crave human companionship and love being included in all family activity. The flip side to this is that they can easily develop separation anxiety or barking behaviors. Early training, plenty of exercise and mental activity can keep these problems from developing. Their herding nature can cause Aussies to be chasers or nippers. They will chase birds, rabbits, cats, bikes, and even cars. Australian Shepherds should be closely supervised if not on a leash, or in a fenced yard, to avoid potentially dangerous situations.

Australian Shepherds shed year round, and shed very heavily twice a year during season changes. To keep shedding under control and mats from forming in the coat, Aussies should be brushed weekly, year round, several times per week during periods of heavy shedding. This breed is relatively clean by nature so baths only need to be given as-needed when the dog is dirty or begins to emit an odor. Regular ear cleanings, teeth cleanings, and nail trimmings should also be part of the grooming regimen in order to promote optimal health and appearance.