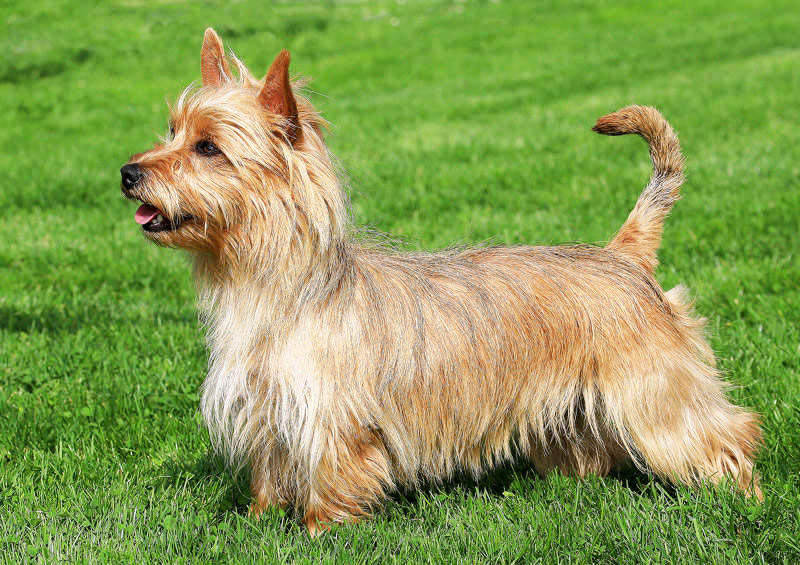 The Australian Terrier is descended from the rough coated type terriers brought from Great Britain to Australia in the early 19th century. The ancestral types of all of these breeds were kept to eradicate mice and rats. The Australian Terrier shares ancestors with the Cairn Terrier, Shorthaired Skye Terrier, and the Dandie Dinmont Terrier; Yorkshire Terriers and Irish Terriers were also crossed into the dog during the breed's development.

A small, sturdy, medium-boned working terrier, rather long in proportion to height with pricked ears and docked tail. Blue and tan, solid sandy or solid red in color, with harsh-textured outer coat, a distinctive ruff and apron, and a soft, silky topknot. As befits their heritage as versatile workers, Australian Terriers are sound and free moving with good reach and drive. Their expression keen and intelligent; their manner spirited and self-assured.

The Australian Terrier is the quietest breed of terrier. Eager to please and obedient, Australian Terriers, although less “yappy” than their counterparts, are spunky, scrappy, persistent and full of personality. Though tiny, these working dogs are sturdy and always vigilant, making them excellent watchdogs. And unlike other terriers, Australians can easily coexist with other pets.

Though Australian Terriers are small dogs, they require regular exercise. They were originally bred to be herders and hunters of small pests, so they are happy in a yard with room to run and chase toys or birds. Apartment dwellers can raise a happy terrier if they commit to walking their dog regularly, taking trips to the dog park and engaging in plenty of games of fetch. Australians do well in families of all sizes and ages, so long as they are active. Children can help exercise Australian Terriers by playing fetch, or hiding toys for them to find in the yard.

Once firm leadership is established, Australian Terriers can excel in training. Though small and generally possessing the desire to please, Australian Terriers are also independent and like to be the boss. Early training and a confident air can teach the Australian who is really in charge of the home. Positive reinforcement and rewards are the best method to train this breed. Like other breeds of terrier, Australians are quick to bark and quick to take a chase. Though they may listen to you one-on-one, if an Australian Terrier takes off after a small animal, he probably won't obey your commands to come home. For this reason they should be kept on a leash or in a fenced-in yard at all times.

Australian Terriers were developed in Tasmania to be cattle herders and hunters of pests like snakes and rodents. Their small size made them excellent ratters, and their boundless energy and fearless nature made them excellent herders. These same drives to run and hunt are still found in modern Australians. If left to their own devices outdoors, they will dig and dig some more. They can exert dominance over small children, but proper training at an early age can prevent bad behavior. Like other breeds of terrier, the Australian will bark early and often. But they tend to bark less than other breeds. They can be a bit reserved when introduced to a stranger, but generally maintain good manners. They will coexist pleasantly with other pets, but like other breeds of terriers, the Australian can become aggressive toward dogs of the same sex.

Aussies shed minimally throughout the year, and the regular brushing that is required to keep the coat neat will minimize the amount of hair that is shed to the floor. The coat requires brushing several times a week to avoid tangles and mats. Aussies should only be bathed as-needed, as frequent baths will soften the course terrier coat, which is fine for household pets, but show terriers should never be soft. Unless the dog loves to roll in muck, Aussies only need baths once every three or four months. Some owners prefer to trim the dog's hair to keep it neat, but this is not required. Toenails should be clipped monthly, and regular ear and teeth cleanings can keep harmful bacteria from gathering in the ears and mouth.