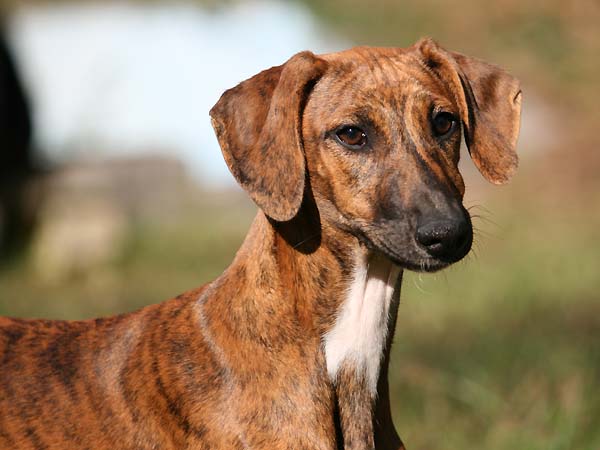 Bred by the Tuareg, Fula and various other nomads of the Sahara and sub-Saharan Sahel in the countries of Mali, Niger, Burkina Faso, and southern Algeria, the breed known by the tuaregs as ”Oska” was used there as a guard dog and to hunt gazelle and hare at speeds up to 40 miles per hour. The austerity of the Sahel environment has ensured that only the most fit dogs survive and has accentuated the breed's ruggedness and independence. Unlike some other sighthounds, the Azawakh is more of a pack hunter and they bump down the quarry with hindquarters when it has been tired out. In role of a guard dog, if an Azawakh senses danger it will bark to alert the other members of the pack, and they will gather together as a pack under the lead of the alpha dog, then chase off or attack the predator. The Sloughi, by comparison, is more of an independent lone hunter and has a high hunting instinct.

They are relatively uncommon in Europe and North America but there is a growing band of devotees. Azawakhs have a range of temperaments from lap dog to quite fierce. Lifelong socialization and firm but gentle handling are critical. Well socialised and trained, they can be good with other dogs, cats, children, and strangers. Azawakh may be registered with the FCI in the USA via the Federación Canófila de Puerto Rico (FCPR). European FCI clubs and the AKC recognize the FCPR as an acceptable registry. The AKC (not a member of the FCI) currently recognizes Azawakh as a Foundation Stock Service breed and they are eligible to participate in AKC-sanctioned Companion & Performance events. The breed will enter the AKC Miscellaneous Class on June 30, 2011. The American Azawakh Association (AAA) is the AKC Parent Club for the Azawakh. Azawakh may be registered with the UKC and ARBA. The breed is not yet registered by CKC. Azawakh are eligible for ASFA and AKC lure coursing and NOFCA open field coursing events.

The Azawakh is an African sighthound of Afro-Asiatic type, which appeared in Europe towards 1970 and, comes from the Nigerian middle basin, among others, from the Valley of the Azawakh. For hundreds of years, he has been the companion of the nomads of the southern Sahara. Particularly leggy and elegant, the Azawakh gives a general impression of great fineness. His bone structure and musculature are transparent beneath fine and lean skin. This sighthound presents itself as a rangy dog whose body fits into a rectangle with its longer sides in a vertical position. Faults - Heavy general appearance.

Azawakhs are an incredibly sound coursing hound. Serious coursing injuries are rare. The dogs heal very quickly from injury. Azawakh have no known incidence of hip dysplasia. There is a small occurrence of adult-onset idiopathic epilepsy in the breed. Wobbler disease, or cervical vertebral instability, does rarely occur. Some breeders believe this is largely a developmental problem where puppies grow too quickly due to a high-protein Western diet.

Azawakhs are the edgiest of all sighthound breeds. They are loyal and fiercely protective of their families. However, they usually are indifferent, cautious and guarded around strangers. Sometimes described as being more like cats than dogs, Azawakhs are reserved, observant and extremely independent. They are calm, self-confident and clever, and they definitely like to have things their own way. They should not be aggressive or overly timid. But, Azawakhs that are raised in kennel situations or poorly socialized can be achingly shy. They may be nervous, frightened or panicky to the point of freezing in place or trembling when faced with unfamiliar situations or people. If pushed, they may snap or bite, not out of aggression but out of fear. Unfortunately, some Azawakhs are aggressive. These are smart dogs that certainly can overcome their shy or dominant propensities with help from kind, patient owners. Even properly raised Azawakhs tend to be touchy and startle easily. However, they watch their owners and usually will follow their lead.

With family, Azawakhs are faithful, gentle and affectionate. They often bond closely with one family member, rather than dividing their affection equally. Because of their unique dispositions, Azawakhs do not change owners with ease and can be extremely difficult to rehome. Some Azawakh fanciers are trying to breed more stable, approachable dogs, to increase their popularity and reliability.

This breed only left the African desert a few decades ago. It still has its native hunting and guarding instincts, including its extreme prey drive. Bred to live and hunt in packs, Azawakhs develop clear hierarchies with other dogs, and there always is a definite alpha leader. These dogs express their intentions and moods to one another through a repertoire of sounds and postures that remain mysterious to the humans who love them.

Azawakhs are very active animals that require 30 to 60 minutes of vigorous running or play every single day, and make the perfect companion for bikers, runners or other active, outdoorsy people. They are bred to run and they must be allowed to do so on a regular basis. When playing, Azawakhs like to run in spurts, and then nap on a couch or lounge in front of the fire. They should have a large, well-fenced area where they can stretch their legs, but they probably will need to interact with people or other dogs to get enough exercise. Leaving them alone in the back yard won’t do the trick; unless they are chasing something because despite their need to run, Azawakhs can be lazy when left to their own devices. Finding a securely fenced ball field is perfect for play dates. Tossing a ball, paying fetch and retrieve or hiding and chasing are great ways for Azawakhs and their owners to burn off energy and stay fit.

Azawakhs don’t do well kept in crates. If unattended for long periods of time, they become bored and will look for their own forms of entertainment. They can shred furniture and dig giant holes in short order. They also can be escape artists. Azawakhs generally make terrific travelling companions and also enjoy hopping in the car to accompany their owners on short local errands. Azawakhs excel in competitive canine sports, including lure coursing, field hunting, agility, utility, jumping, freestyle and obedience, among others. They also thrive just hanging out with their family - playing, hiking, jogging and swimming. They are not well suited for apartment living.

Azawakhs are independent-minded, strong-willed animals that can be dominant despite their tendency to be touchy and a tad timid. This is not the breed for people who are passive or meek. This dog’s owner must set the rules and enforce them kindly and consistently. Otherwise, the Azawakh will try to assume the role of pack leader, which must not be allowed to happen. These are smart, sensitive dogs that respond best to reward-based positive reinforcement. They don’t respond well to yelling or harsh, heavy-handed treatment. Loud scolding or physical punishment can damage the delicate trust between dog and owner and cause an Azawakh to become fearful or aggressive. For owners who understand their disposition, socialize them properly and train them from puppyhood with a firm, fair hand, Azawakhs can make wonderful companions and show-ring competitors.

Azawakhs detest cold, wet weather. They are easily chilled and need a coat or sweater if they are out in the cold – especially in rain or snow. They can become overweight and lethargic, or hyperactive and destructive. if they are not given proper outlets for their energy. Some Azawakhs are reliable off-leash, if they have been taught a strong recall. Azawakhs generally get along well with other dogs in the household, as long as they are raised together. This is not a good breed for homes with cats or first-time dog owners. It also is not the best choice for homes with young children or children who are not well-supervised. Azawakhs are extremely protective and suspicious of strangers. Although they are not usually very outgoing, Azawakhs have served as therapy dogs in rehabilitation centers and nursing homes.

Because of its short coat, the Azawakh is easy to groom. The breed isn’t a heavy-shedder. A good brushing or wipe-down with a damp cloth about once a week usually is all that is necessary to keep the Azawakh’s coat in good shape. Another option is a “hound glove,” which is used to groom many smooth-coated breeds. One side of the glove is covered with rubber bristles, while the other contains a sticker brush. Frequent bathing is not necessary, because Azawakhs don’t have a doggy odor. However, they do have thin, sensitive skin. When they are given a bath, a gentle, unscented shampoo should be use. Clipping the nails once every few weeks, starting from puppyhood, is usually sufficient.