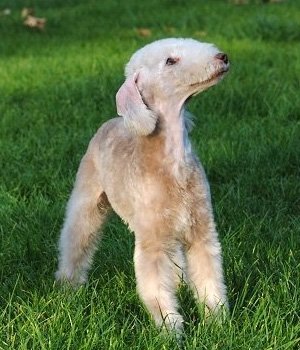 Bred in the village of Bedlington in Northumberland, the Bedlington Terrier has been described as "the favourite companion of the northern miners". They were originally known as Rodbury Terriers, Rothbury Terriers, or "Rothbury's Lambs", because the Lord of Rothbury had taken a particular liking to the dogs. Before this, they were known as "gypsy dogs", as gypsies and poachers used them to hunt. The first mention of the Bedlington terrier, or as it was then known, the Rothbury or Rodbury Terrier, was in 1825, most likely in The Life of James Allen, but some dogs' pedigrees have been traced as far back as 1782. James' father, William, was much in demand as an otter hunter, and he kept Bedlington Terriers in order to help him hunt. They were also valued by their owners as rabbit coursing dogs and racing dogs, until the Whippet became more popular as a racing dog and a courser.

The Bedlington Terrier name was first given to a dog named Young Piper, which was owned by a man named Joseph Ainsley. Ainsley's Piper has been called "the best of his race" and "had a reputation for great pluck and courage". Piper began working with badgers at eight months old, and carried on hunting other animals generally regarded as vermin until he was blind. Piper is also known for saving a child from a pig, keeping the animal at bay until help arrived. Piper died at fifteen.

It is unknown if the judges of the time were aware of this practice, or if they cared. The practice of trimming was eventually accepted by The Kennel Club, under the pretense that the trimming was being done to "smarten a dog to show his shape and general contour."

In 1948, Ch. Rock Ridge Night Rocket took best in show at the Westminster Kennel Club Dog Show and was subsequently featured in LIFE magazine. One of his descendants, Ch. Femars' Cable Car, was featured on the cover of Sports Illustrated in the February 8, 1960 edition.

The Bedlington Terrier is a graceful, lithe, well-balanced dog with no sign of coarseness, weakness or shelliness. In repose, the dog's expression is mild and gentle, not shy or nervous. Aroused, the dog is particularly alert and full of immense energy and courage. Noteworthy for endurance, Bedlingtons also gallop at great speed, as their body outline clearly shows.

Longevity. Median longevity of Bedlington Terriers, based on two recent UK surveys, is about 13.5 years, which is longer than for purebred dogs in general and longer than most breeds similar in size. The longest-lived of 48 deceased dogs in a 2004 UK Kennel Club survey was 18.4 years. Leading causes of death among Bedlington Terriers in the UK were old age (23%), urologic (15%), and hepatic (12.5%). The leading "hepatic" cause of death was copper toxicosis. Dogs that died of liver diseases usually died at a younger age than dogs dying of most other causes. Bedlington Terrier owners in the UK reported that the most common health issues among living dogs were reproductive, heart murmur, and eye problems such as epiphora, retinal dysplasia, and cataracts. Bedlingtons seem to be more prone to these eye diseases than other breeds. They also have a high incidence of kidney problems. Copper toxicosis occurred among about 5% of living dogs. Inbreeding is a concern, as some dogs "[having] been bred in and in to a damaging extent."  Reputable breeders will conduct DNA testing of all litters and will not allow pups who carry the copper toxicosis gene to be bred, a practice which has significantly reduced the incidence of this disease in the breed. Excepting these problems, Bedlingtons are generally a very healthy breed.

Copper toxicosis. Copper toxicosis, also known as copper storage disease and copper overload syndrome, is an autosomal recessive disease that is characterized by an accumulation of copper in the liver. It is closely related to Wilson's disease in humans. Bedlington Terriers are more prone to copper toxicosis than most other dog breeds. West Highland White Terriers, Skye Terriers, and Doberman Pinschers are also prone to copper storage disease. Bedlington Terriers are the only breed of dog in which haemolysis has been reported, but there have been no reports of neurological involvement in any dog breed. Studies have shown that in Bedlingtons, the disease is caused by a defective metallothionein that causes cell lysosomes to become saturated with copper. This causes the cell to store copper in the nucleus. There are three varieties of the disease: the Asymptomatic Form occurs when copper accumulates but there are no clinical symptoms of the disorder; the Fulminating Form which is seen mostly in young dogs, causes death in two to three days, and is thought to be caused by stress; and the Chronic Form, which is characterized by an extended period of time in which liver disease slowly causes the death of the dog. Bedlingtons also have a tendency to accumulate iron in the liver, but not nearly to the extent that they accumulate copper.

At first glance, a Bedlington Terrier can be easily confused with a lamb. However, once you get to know a Bedlington, you'll see they are 100% terrier. Sassy, strong willed, and always alert, Bedlingtons are everything you'd expect from a terrier breed. They love people, but will be quick to let everyone in a three-block radius know when a stranger gives off a bad vibe. Great family dogs, the Bedlington Terrier loves to run and play with children, then shamelessly hog the sofa for snuggling with mom and dad in the evening.

This breed requires moderate exercise and has been known to tailor their activity level to that of their owner. Older people can raise an active, happy Bedlington just by taking daily walks just as a young person who brings their Bedlington on jogs can, too. Apartment living is OK for the Bedlington, so long as daily walks are part of his schedule. Bedlington Terriers enjoy playing with children, however they can be counted on to set their own boundaries. Children should be cautioned not to play too roughly with this breed, as they won't hesitate to nip or bite when pushed too far.

As with most terriers, training a Bedlington can be a challenge. They like to do things in their own way, and don't appreciate being told what to do. For this reason, treat training and using lots of positive reinforcement works best. That way, he thinks that learning new behaviors actually benefits him, rather than you. A stern hand won't work, as it just creates avoidance behaviors and stubbornness.

Barking is a classic terrier trait that is present among all Bedlingtons. They will bark at noises and anyone coming in to the home, even if they know the person. Early training and socialization can help keep the family's collective sanity in check. Bedlington Terriers can be aggressive to other dogs. If raised alongside other animals, peaceful coexistence is possible, but new pets should probably not be introduced to a Bedlington's home. They will also chase after small animals outside, so they should never be left off-leash in an area without a sturdy fence. Bedlingtons have been known to dig under fences to seek out new adventures, so even in a fenced yard, this breed should not be left unattended.

Bedlingtons need to be professionally groomed to maintain their lamb-like appearance. Handy owners can be taught how to do it, but most prefer to leave it to the professionals. Their faces need to be hand clipped with scissors, which can be tricky. Bathing is required every few months, but some owners prefer to stick to a six-week bath and clipping schedule. They do not shed much, but weekly combings are required to get rid of dead hair and keep the coat's unique texture in tact. Regular cleaning of teeth and ears can help keep harmful bacteria from building up and will maintain the overall health of the dog.