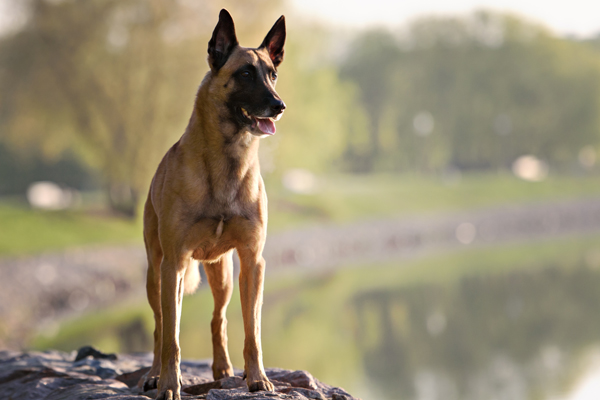 The Belgian Malinois (MAL-in-wah), first bred around the city of Malines in the northwestern region of Belgium, are one of four closely related breeds of Belgian herding dogs. In some countries, the Malinois is classified together with the Tervuren, Laekenois, and Belgian Shepherd (aka Groenendael) as a single breed collectively known as the Belgian Sheepdog. In America, the Malinois has been registered as a separate breed since 1959. He bears a passing resemblance to the German Shepherd Dog but has a different head, and is leggier and finer boned, than his better-known German counterpart.

Mals have long been acknowledged as a peerless livestock herder in their native land. They were first bred by serious dog people who were primarily concerned with producing dogs of sterling working character and who spurned passing fads and fancies of pet owners. This emphasis on performance made the Mal the go-to dog for Belgian sheepherders and cattlemen.

It was in 1911 that Mals were first brought to America. They flourished here until the outbreak of World War II put an end to the importation of European breeding stock. The breed languished in the postwar years until the early 1960s, when the Mal’s admirers began the process of replenishing its American population.

Mals are still prized as herders of all kinds of stock, but their versatility and high work-drive have opened careers in many other occupations and activities. They are highly sought after as police and military K-9s. They have served with such distinction that the Fayetteville, North Carolina, memorial to military dogs features a life-size bronze of a Belgian Malinois.

The Belgian Malinois is a well balanced, square dog, elegant in appearance with an exceedingly proud carriage of the head and neck. The dog is strong, agile, well muscled, alert, and full of life. He stands squarely on all fours and viewed from the side, the topline, forelegs, and hind legs closely approximate a square. The whole conformation gives the impression of depth and solidity without bulkiness. The male is usually somewhat more impressive and grand than his female counterpart, which has a distinctly feminine look.

The average lifespan of the Belgian Malinois is 10–12 years. Notable health problems prevalent to the Malinois include cataracts, epilepsy, thyroid disease, progressive retinal atrophy, hip dysplasia and pannus, although these problems have been minimized through selective breeding.

The Belgian Malinois is a member of the Belgian Sheepdog family. Like other Belgians, the Malinois is a sturdy, alert, loyal companion, and can thrive as a farm dog or a family dog. As with all Belgian Sheepdog breeds, Malinois were bred to herd and protect livestock, so they must have constant activity, whether playing with children, going on long walks, or chasing a frisbee. Ever vigilant, they make excellent watchdogs, and can be trained to do a variety of tasks.

Malinois need a lot of vigorous activity in order to remain happy and healthy and should not be kept in an apartment. If they don't get enough activity, Malinois can quickly become destructive. Farms or houses with big, fenced-in yards are the most ideal settings for this breed. Active and able participants in outdoor activities, Malinois will want to be included in all family activities, whether doing farm chores, chasing a frisbee in the yard, or taking long walks in the park. They love to spend time outdoors, among their family and engaged in interesting and fun activities.

Though sometimes willful and stubborn, Belgians are highly trainable and thrive on advanced obedience, trick and agility training. They can read small movements and even changes in facial expression, and are famous for being so “in tune” with their trainers that they can literally stay one step ahead of the person giving commands. Though they learn quickly, Belgians are not for the first-time dog owner. They are highly intelligent and manipulative, and can easily walk all over someone who lacks consistency or wears their heart on their sleeve. Positive reinforcement is the best method to train a Belgian Malinois, as discipline can lead to avoidance behavior and stubbornness.

Malinois are herders and this instinct can lead them to chase and nip. Bikes, cars, kids, or other animals can set them off and running. If this breed doesn't have enough interesting activities to do, he can take to herding children and nipping at their heels. This herding instinct also makes Malinois, like all Belgian Sheepdogs, protective of their home and family. They can be wary of strangers so it is important that they be socialized as early as possible to learn the difference between a welcome guest and an unwelcome guest, or aggression can develop. Chewing, barking and separation anxiety can sometimes develop in this breed, but that can be attributed to lack of exercise and boredom. Adopting a Belgian Malinois means adopting an active lifestyle.

Belgians are a snap to groom, as their short coats do not require trimming or stripping. They shed heavily year-round, so weekly brushing is a must. They will shed profusely at the change of seasons, so Spring and Fall may require daily brushing. They only need to be bathed as-needed, when they get extra dirty or start emitting a doggy odor. Active Belgians can wear down their toenails naturally, making nail trimmings unnecessary, but if the dog's nails click on hard floors, they are too long. Regular teeth cleaning and ear cleaning can keep harmful bacteria from growing, and help keep the dog healthy.