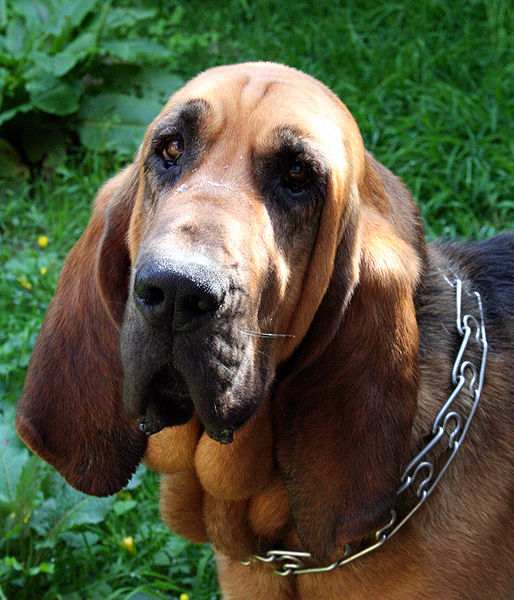 References to bloodhounds first appear in English writing in the early to mid 14th century, in contexts that suggest the breed was well established by then. It is often claimed that its ancestors were brought over from Normandy by William the Conqueror, but there is no actual evidence for this. That the Normans brought hounds from Europe during the post-Conquest period is virtually certain, but whether they included the Bloodhound itself, rather than merely its ancestors, is a matter of dispute that probably cannot be resolved on the basis of surviving evidence.

In Medieval hunting the typical use of the Bloodhound was as a ‘limer’, or ‘lyam-hound’, that is a dog handled on a leash or ‘lyam’, to find the hart or boar before it was hunted by the pack hounds (raches). It was prized for its ability to hunt the cold scent of an individual animal, and, though it did not usually take part in the kill, it was given a special reward from the carcass. It also seems that from the earliest times the Bloodhound was used to track people. There are stories written in Medieval Scotland of Robert the Bruce (in 1307), and William Wallace (1270–1305) being followed by 'sleuth hounds’. Whether true or not, these stories show that the sleuth hound was already known as a man-trailer, and it later becomes clear that the sleuth hound and the Bloodhound were the same animal. In the 16th century, John Caius, in the most important single source in the history of the Bloodhound, describes its hanging ears and lips, its use in game parks to follow the scent of blood, which gives it its name, its ability to track thieves and poachers by their foot scent, how it casts if it has lost the scent when thieves cross water, and its use on the Scottish borders to track cross-border raiders, known as Border Reivers.

With the rise of fox-hunting, the decline of deer-hunting, and the extinction of the wild boar, as well as a more settled state of society, the use of the Bloodhound diminished. It was kept by the aristocratic owners of a few deer-parks and by a few enthusiasts, with some variation in type, until its popularity began to increase again with the rise of dog-showing in the 19th Century. Numbers, however, have remained low in Britain. Very few survived the Second World War, but the gene-pool has gradually been replenished with imports from America. Nevertheless, because of UK quarantine restrictions, importing was expensive and difficult, throughout the 20th century, and in the post-war period exports to the USA, and to Europe where the population had also been affected by the war, considerably exceeded imports.

During the later 19th century numbers of Bloodhounds were imported from Britain by French enthusiasts, who regretted the extinction of the ancient St Hubert. They wished to re-establish it, using the Bloodhound, which, despite its developments in Britain, they regarded as the St Hubert preserved unchanged. Many of the finest specimens were bought and exhibited and bred in France as Chiens de S. Hubert, especially by Le Couteulx de Canteleu, who himself bred over 300. Whatever few original St Huberts remained either died out or were absorbed into the new population. As a result, the Bloodhound became known on parts of the Continent as the Chien de Saint-Hubert. In the mid 20th century the Brussels-based FCI accepted the claim of Belgium to be the country of origin. There are now annual celebrations in the town of Saint-Hubert, in which handlers in period dress parade their hounds. In Britain the bloodhound has continued to be seen as a native breed, with European St Huberts being accepted by the UK KC as bloodhounds.

When the first Bloodhounds were exported to the USA is not known. Bloodhounds were used to track runaway slaves before the American Civil War, but it has been questioned whether the dogs used were genuine Bloodhounds. However, in the later part of the 19th century, and in the next, more pure Bloodhounds were introduced from Britain, and bred in America, especially after 1888, when the English breeder, Edwin Brough, brought three of his hounds to exhibit at the Westminster KC show in New York City. He went into partnership with Mr J L Winchell, who with other Americans, imported more stock from Britain. Bloodhounds in America have been more widely used in tracking lost people and criminals - often with brilliant success - than in Britain, and the history of the Bloodhound in America is full of the man-trailing exploits of outstanding Bloodhounds and their expert handlers, the most famous hound being Nick Carter. Law enforcement agencies have been much involved in the use of Bloodhounds, and there is a National Police Bloodhound Association, originating in 1962. In Britain there have been instances from time to time of the successful use of the Bloodhound to track criminals or missing people. However man-trailing is enjoyed as a sport by British Bloodhound owners, through national working trials, and this enthusiasm has spread to Europe. In addition, while the pure Bloodhound is used to hunt singly, bloodhound packs use bloodhounds crossed with foxhounds to hunt the human scent.

The Bloodhound possesses, in a most marked degree, every point and characteristic of those dogs which hunt together by scent (Sagaces). He is very powerful, and stands over more ground than is usual with hounds of other breeds. The skin is thin to the touch and extremely loose, this being especially noticeable about the head and neck, where it hangs in deep folds.

Compared to other purebred dogs, Bloodhounds suffer an unusually high rate of gastrointestinal ailments, with gastric dilatation volvulus (bloat) being the most common type of gastrointestinal problem. The breed also suffers an unusually high incidence of eye, skin, and ear ailments; thus these areas should be inspected frequently for signs of developing problems. Owners should be especially aware of the signs of bloat, which is both the most common illness and the leading cause of death of Bloodhounds. The thick coat gives the breed the tendency to overheat quickly.

Hollywood has given us two images of the droopy-faced Bloodhound. One, a focused detective's companion, sniffing out the bad guys from wherever they hide. Two, a lazy porch-dweller sitting along side southern gentlemen as they sip their iced tea. Neither of these images is entirely wrong. Bloodhounds are some of the best tracking dogs around, and they do love to relax. A laid back breed that is very good with children and other pets; Bloodhounds make excellent companions for families of any size.

The Bloodhound's reputation for relaxation can be misleading. While they are happy to nap the afternoon away, they do need lots of activity. They will do ok in an apartment, as long as they get several long walks a day. A house with a fenced in yard where he can run and romp with children or other dogs is the most ideal situation for a Bloodhound. The fence is very important – if a Bloodhound catches a scent and decides to take off, you'll have a hard time getting him back home. Those who consider themselves to be “outdoorsy” should consider a Bloodhound. He makes an excellent hiking companion and will happily trot alongside joggers and bikers. Bloodhounds are intelligent and in addition to physical activity, they need lots of mental activity as well. Problem solving or tracking activities can satisfy their need for mental stimulation.

Bloodhounds are stubborn and intelligent. They can spot a “softy” a mile away and will use his droopy eyes to manipulate a situation. It is important to be consistent and confident when training a Bloodhound – but never be stern or forceful. They are sensitive animals and will not respond well to harsh treatment. Positive reinforcement and lots of treats will help get desired behavior from a Bloodhound. Bloodhounds are happy when they are able to track. Enrolling a Bloodhound in tracking activities can keep him happy and entertained year-round. Hunters won't need to put too much work into training a Bloodhound, his talents are inborn. They are such good trackers that Bloodhounds are often used by law enforcement to find missing children and wily criminals.

Bloodhounds take a while to grow up, so owners should be prepared for a prolonged puppyhood that includes chewing, barking and lots of jumping on people and things. Housetraining can also take a long time with this breed. Bloodhounds are notorious for baying, especially at night or when left alone. They probably shouldn't be left outside at night – they will wake the entire neighborhood. Separation anxiety can also develop with Bloodhounds. They love spending time with their families and if they aren't exercised enough, can develop anxiety when left alone that usually manifests itself in chewing behaviors. And finally, Bloodhounds slobber and drool. A lot. Someone who has lots of expensive couches might want to reconsider adopting a bloodhound because he'll want to be near his people when they relax and there is no stopping the drool.

Bloodhounds require a lot of grooming to remain healthy. They shed lightly throughout the year, and heavier during the change in season. Weekly brushing can keep shedding under control. A hound mitt is recommended for brushing, as this breed has thin skin and requires a gentle touch. The folds of the Bloodhound's skin should be wiped out daily with a damp cloth in order to prevent bacterial infections. Don't forget to dry afterward. The flews – the part of the upper lip that hangs – also need to be wiped out after mealtime. Bloodhounds are very prone to ear infections, thanks to their heavy, dropped ears which allow for virtually no air circulation. Use a veterinarian-recommended cleaning solution every week to make sure harmful bacteria does not build up. They are also prone to bad breath and rotting teeth, so daily or weekly brushing of the teeth is required.