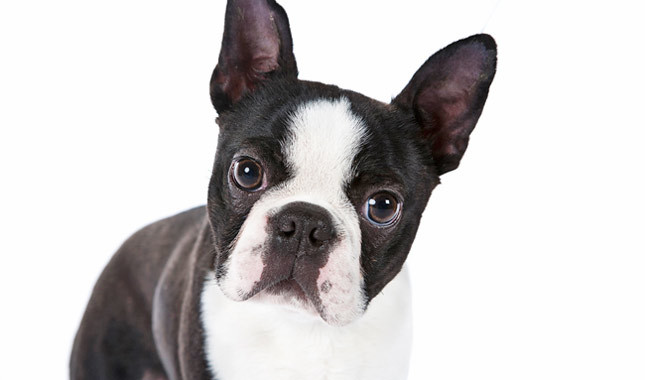 The Boston terrier breed originated around 1870, when Robert C. Hooper of Boston, purchased from Edward Burnett a dog named Judge (known later as Hooper's Judge), which was of a Bull and Terrier type lineage. Hooper's Judge is either directly related to the original Bull and Terrier breeds of the 19th and early 20th centuries, or Judge is the result of modern English Bulldogs being crossed into terriers created in the 1860s for show purposes, like the White English Terrier. The American Kennel Club cites Hooper's Judge as the ancestor of almost all true modern Boston Terriers.

Judge weighed over 27.5 pounds (12.5 kg). The offspring interbred with one or more French Bulldogs, providing the foundation for the Boston Terrier. Bred down in size from fighting dogs of the Bull and Terrier types, the Boston Terrier originally weighed up to 44 pounds (20 kg) (Olde Boston Bulldogge). The breed was first shown in Boston in 1870. By 1889 the breed had become sufficiently popular in Boston that fanciers formed the American Bull Terrier Club, the breed's nickname, "roundheads". Shortly after, at the suggestion of James Watson (a noted writer and authority), the club changed its name to the Boston Terrier Club and in 1893 it was admitted to membership in the American Kennel Club, thus making it the first US breed to be recognized.[9] It is one of a small number of breeds to have originated in the United States. The Boston Terrier was the first non-sporting dog bred in the US.

In the early years, the color and markings were not very important. By the 20th century the breed's distinctive markings and color were written into the standard, becoming an essential feature. The Boston Terrier has lost most of its aggressive nature, preferring the company of humans, although some males will still challenge other dogs if they feel their territory is being invaded. Boston University's mascot is Rhett the Boston Terrier. The Boston Terrier is also the mascot of Wofford College in Spartanburg, S.C.

The Boston Terrier is a lively, highly intelligent, smooth coated, short-headed, compactly built, short-tailed, well balanced dog, brindle, seal or black in color and evenly marked with white. The head is in proportion to the size of the dog and the expression indicates a high degree of intelligence. The body is rather short and well knit, the limbs strong and neatly turned, the tail is short and no feature is so prominent that the dog appears badly proportioned. The dog conveys an impression of determination, strength and activity, with style of a high order; carriage easy and graceful.

Curvature of the back, called roaching, might be caused by patella problems with the rear legs, which in turn causes the dog to lean forward onto the forelegs. This might also just be a structural fault with little consequence to the dog. Due to their shortened muzzles, many Boston Terriers cannot tolerate excessively hot or cold weather and demanding exercise under such conditions can cause them harm. A sensitive digestive system is also typical of Boston Terriers with flatulence commonly being associated with poor diet in the breed.

Their large and prominent eyes make Boston Terriers prone to corneal ulcers. Due to the breed being characterized by a short muzzle paired with a large pair of eyes, their eyes are susceptible to injury when making contact with sand, dust, debris, or sharp objects, such as plants with thorns.

Bostons are brachycephalic breeds. The word comes from Greek roots "Brachy," meaning short and "cephalic," meaning head. This anatomy can cause tiny nostrils, long palates and a narrow trachea. Bostons may be prone to snoring and reverse sneeze—a rapid and repeated forced inhalation through the nose—accompanied by snorting or gagging sounds used to clear the palate of mucus, which does not harm the dog in any way. Brachycephalic dogs may be prone to complications with general anesthesia. Bostons frequently require caesarean section to give birth, with over 90% of litters in a UK Kennel Club survey delivered this way.

The Boston Terrier personality varies from individual to individual. Some are rowdy and sassy, others more mellow and subdued, while still others will do anything for a laugh. All Boston Terriers, however, love people, love activity and love lots of attention. They are especially good dogs for elderly people, as they tend to focus most of their attention to one person, and tune in to that person's emotions. A Boston knows when his person is sad, happy, lonely or angry and can adjust his own behavior accordingly.

Boston Terriers are small, but love to run. They will chase after a ball as often as you are willing to throw it. Apartments are perfectly suitable for a Boston, but they will need daily walks and play time. Families of any size or age can adopt a Boston with confidence. They will happily romp around the yard with children, or spend the afternoon curled on the lap of an elderly companion. They are very adaptable and will adjust their activity level to the person they care about the most.

Beware the expressive eyes of a Boston Terrier. He will use his charming looks to melt the hearts of those who try to train him. Despite their tendency toward manipulation, however, Boston Terriers are highly trainable. Consistency, a little positive reinforcement and lots of treats are the best training combination for this breed. A harsh tone and disciplinary action will cause a Boston to develop avoidance behaviors and stubbornness.

Bostons bark. Just like other terriers they are quick to alert everyone that there is a stranger approaching, leaving, or walking somewhere across the street. Like other terrier breeds, Bostons also like to bark at other dogs, but they are rarely aggressive. They are a true case of bark being much worse than bite. Early training to learn a stop barking command is essential to maintain family sanity. Boston Terriers love their family and want to be with their people as often as possible. For this reason, separation anxiety is often a problem, and Bostons will bark, chew and scratch until their people come home. Keeping a Boston well exercised and giving him lots of activities to keep himself busy while he's alone can prevent problems.

Grooming a Boston Terrier is a snap. This breed sheds lightly throughout the year, so weekly brushing is enough to keep dead, stray hairs in check. They only need to be bathed as needed, when they get particularly dirty. Some owners find that a dry shampoo helps keep the dog clean, the coat healthy, and further minimizes the need for a bath. Their faces should be cleaned daily, as their protruding eyes can easily become irritated or pick up an infection. Weekly ear and teeth cleaning will keep harmful bacteria at bay, and Bostons who don't wear their nails down naturally will need a monthly clipping.