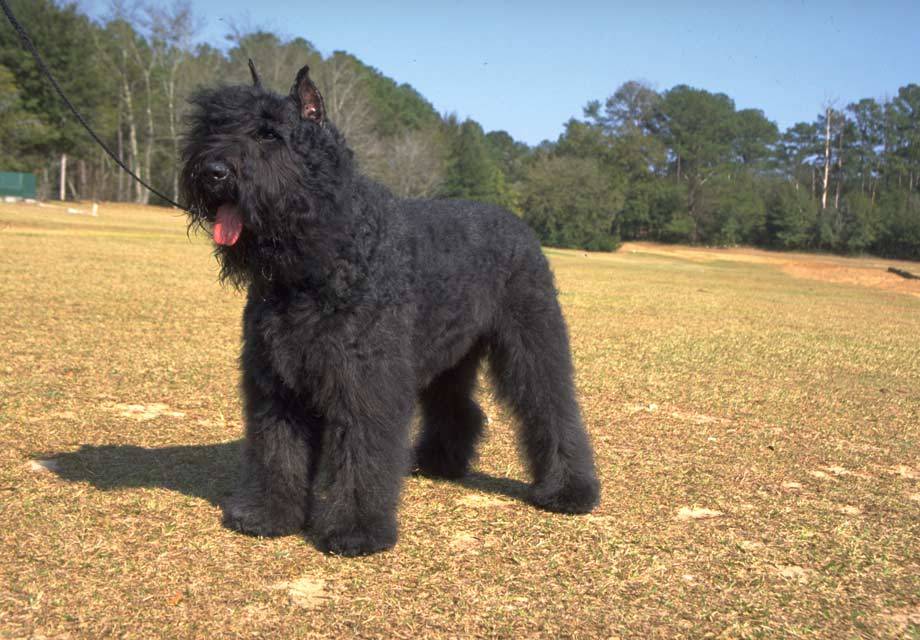 The monks at the Ter Duinen monastery in Flanders were among the earliest known breeders of Flanders. The bouviers bred by them are recorded as having been bred from imports such as Irish wolfhounds and Scottish deerhounds with local farm dogs, until a breed considered to be the predecessor of the modern Bouvier des Flandres was obtained. This became a working dog able to perform tirelessly, herding and guarding cattle and even pulling cargo carts, thanks to its strength and temperament, and to withstand the local weather conditions due to its thick coat. Historically, the ear cropping and tail docking could have been done for practical reasons, avoiding accidental amputations in the course of work, or to indicate the dog was working stock and not a pet subject to taxation.

Up until the early 20th century, the breed was not completely defined, with three variants: Paret, Moerman or Roeselare, and Briard. Conflict between the proponents of these three variants held the breed's development back. In 1912 and 1913, several local kennel clubs recognized standards for Bouviers; however they usually had different standards for the Roeselare and other variants. World War I nearly caused the breed to disappear, due to the devastation that came over its region of origin and the fact that the dogs were used for military purposes. Indeed, Nic, a male trained as a trench dog who served during the war and was a perennial winner at dog shows after the war, is considered to be the founder of the early Bouvier des Flandres breed. A unified Bouvier des Flandres standard was created in 1936 by a joint French-Belgian committee. However, World War II again endangered the breed's existence. Due to these setbacks, progress was slowed, and it was not until 1965 that the Fédération Cynologique Internationale (FCI) breed standard, as agreed to by several minor kennel clubs, was adopted.

The Bouvier des Flandres is a powerfully built, compact, short-coupled, rough-coated dog of notably rugged appearance. He gives the impression of great strength without any sign of heaviness or clumsiness in his overall makeup. He is agile, spirited and bold, yet his serene, well behaved disposition denotes his steady, resolute and fearless character. His gaze is alert and brilliant, depicting his intelligence, vigor and daring. By nature he is an equable dog. His origin is that of a cattle herder and general farmer’s helper, including cart pulling.

The average life expectancy of the Bouvier des Flandres is 10 to 12 years. As with many other large breeds, they are predisposed to hip dysplasia, especially as they age. Bouviers are highly resistant to pain. Because of their high pain threshold, they can be injured or ailing without showing recognizable clinical signs, a fact of which their owners should be aware. Breed health concerns may include esophageal/pharyngeal muscle degeneration and dysphagia, entropion, primary glaucoma, cataracts, subaortic stenosis, thyroid problems and laryngeal paralysis.

Serious and thoughtful, The Bouvier Des Flanders is a dignified family companion who is built for athletics, but would much rather nap indoors by the fireplace. Rowdy and rambunctious as puppies, as adults Bouviers mellow into dignified and sober housemates. They love to be with people and are happiest when completely surrounded by their “flock” of humans. Their protective nature makes them excellent watchdogs, and they are patient with children.

This gentle giant requires a lot of vigorous activity throughout the day. As Bouviers move from adolescence to adulthood, they will become a bit lethargic and will often need to be told when it's time to exercise, but keeping their activity levels high is very important to their health and mental well being, even if they need to be coaxed into it. This breed, despite their large size, is well-suited for an apartment or condominium, so long as they are exercised daily. If Bouvier Des Flandres aren't exercised enough they can become destructive, and an apartment would be mincemeat in the mouth of a bored Bouvier. A house with a large fenced-in yard for running is great, but as the Bouvier gets older, he may appreciate long walks more so than romping in the grass.

Training a Bouvier requires a strong, confident, consistent leader, and are generally not suited for the first time or passive dog owner.. This breed likes to be in charge, and will quickly take over a household if there is not a clear chain of command. Training requires lots of positive reinforcement and treat rewards; harsh discipline can lead to stubbornness and avoidance behaviors. With proper leadership, Bouviers will excel in basic obedience. They are highly intelligent dogs and to keep their minds active should move on to advanced obedience, tricks or agility training.

When Bouviers are young, they can be quite a handful. They grow quickly and are prone to lots of jumping and running. As they get older, they usually grow out of this. They become less overtly affectionate the older they get, but they show their affinity for their people in other ways, like curling around a loved one's feet when it's time to relax for the evening. The modern Bouvier can revert to its herding roots and try to herd children, bicycles and cars. They are prone to chasing, so they should always be kept on a leash, or in a fenced yard. This herding nature also makes them protective of their family and territory, and this can sometimes lead to aggressive behaviors toward new people and animals. Early socialization can teach a Bouvier that house guests mean no harm.

Bouviers are high-maintenance when it comes to grooming. They require a bath and a trim every six to eight weeks, and in between their coats require a lot of upkeep. The thick coat of the Bouvier des Flandres needs to be brushed several times per week to keep shedding to a minimum, keep tangles and mats from forming, and to look for burrs, ticks or other items that may have gotten caught in the coat. Bouviers are hard to keep clean – especially their beards, feet, and rear ends. Their beards will hold water and food from their dishes, their rears can trap feces, and their feet will pick up mud, grass, dirt, sticks and other various outdoor items. The ears and teeth of a Bouvier should be cleaned on a weekly basis so that harmful bacteria do not have the opportunity to flourish. Additionally, if your Bouvier does not wear his nails down naturally, monthly clippings will be in order.