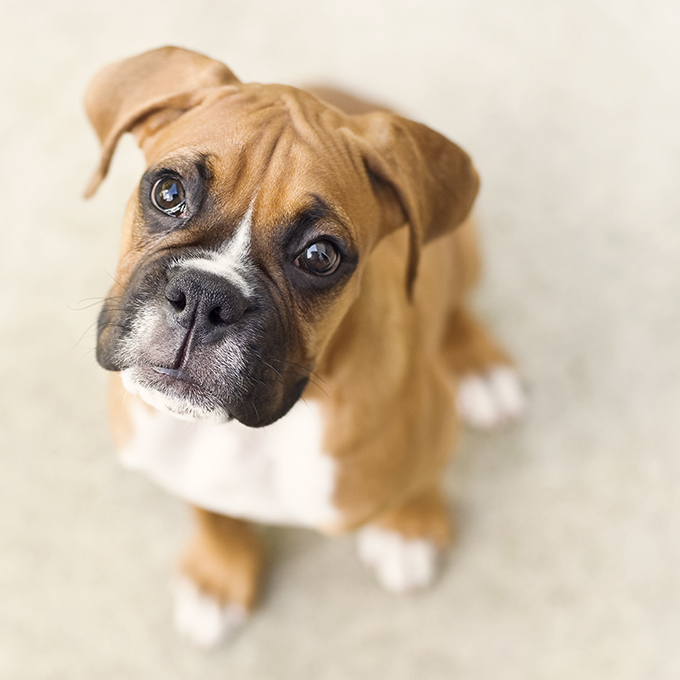 The Boxer is part of the Molosser dog group, developed in Germany in the late 19th century from the now extinct Bullenbeisser, a dog of Mastiff descent, and Bulldogs brought in from Great Britain. The Bullenbeisser had been working as a hunting dog for centuries, employed in the pursuit of bear, wild boar, and deer. Its task was to seize the prey and hold it until the hunters arrived. In later years, faster dogs were favored and a smaller Bullenbeisser was bred in Brabant, in northern Belgium. It is generally accepted that the Brabanter Bullenbeisser was a direct ancestor of today's Boxer. In 1894, three Germans by the names of Friedrich Robert, Elard König, and R. Höpner decided to stabilize the breed and put it on exhibition at a dog show. This was done in Munich in 1896, and the year before they founded the first Boxer Club, the Deutscher Boxer Club. The Club went on to publish the first Boxer breed standard in 1904, a detailed document that has not been changed much to this day. The breed was introduced to other parts of Europe in the late 19th century and to the United States around the turn of the 20th century. The American Kennel Club (AKC) registered the first Boxer in 1904, and recognized the first Boxer champion, Dampf vom Dom, in 1915. During World War I, the Boxer was co-opted for military work, acting as a valuable messenger dog, pack-carrier, attack dog, and guard dog. It was not until after World War II that the Boxer became popular around the world. Taken home by returning soldiers, they introduced the dog to a wider audience and soon became a favorite as a companion, a show dog, and a guard dog.

The German citizen George Alt, a Munich resident, mated a brindle-colored bitch imported from France named Flora with a local dog of unknown ancestry, known simply as "Boxer", resulting in a fawn-and-white male, named "Lechner's Box" after its owner. This dog was mated with his own dam Flora, and one of its offspring was a bitch called Alt's Schecken. George Alt mated Schecken with a Bulldog named Dr. Toneissen's Tom to produce the historically significant dog Mühlbauer's Flocki. Flocki was the first Boxer to enter the German Stud Book after winning the aforementioned show for St. Bernards in Munich 1896, which was the first event to have a class specific for Boxers.

The white bitch Ch. Blanka von Angertor, Flocki's sister, was even more influential when mated with Piccolo von Angertor (Lechner's Box grandson) to produce the predominantly white (parti-colored) bitch Meta von der Passage, which, even bearing little resemblance with the modern Boxer standard (early photographs depicts her as too long, weak-backed and down-faced), is considered the mother of the breed. John Wagner, in The Boxer (first published in 1939) said the following regarding this bitch. Meta von der Passage played the most important role of the five original ancestors. Our great line of sires all trace directly back to this female. She was a substantially built, low to the ground, brindle and white parti-color, lacking in underjaw and exceedingly lippy. As a producing female few in any breed can match her record. She consistently whelped puppies of marvelous type and rare quality. Those of her offspring sired by Flock St. Salvator and Wotan dominate all present-day pedigrees. Combined with Wotan and Mirzl children, they made the Boxer.

The ideal Boxer is a medium-sized, square-built dog of good substance with short back, strong limbs, and short, tight-fitting coat. His well-developed muscles are clean, hard, and appear smooth under taut skin. His movements denote energy. The gait is firm yet elastic, the stride free and ground-covering, the carriage proud. Developed to serve as guard, working, and companion dog, he combines strength and agility with elegance and style. His expression is alert and his temperament steadfast and tractable. The chiseled head imparts to the Boxer a unique individual stamp. It must be in correct proportion to the body. The broad, blunt muzzle is the distinctive feature, and great value is placed upon its being of proper form and balance with the skull.

Leading health issues to which Boxers are prone include cancers, heart conditions such as aortic stenosis and arrhythmogenic right ventricular cardiomyopathy (the so-called "Boxer cardiomyopathy"), hypothyroidism, hip dysplasia, and degenerative myelopathy and epilepsy; other conditions that may be seen are gastric dilatation volvulus (also known as bloat), intestinal problems, and allergies (although these may be more related to diet than breed). Entropion, a malformation of the eyelid requiring surgical correction, is occasionally seen, and some lines have a tendency toward spondylosis deformans, a fusing of the spine, or dystocia. Other conditions that are less common but occur more often in Boxers than other breeds are hystiocytic ulcerative colitis (sometimes called Boxer colitis), an invasive E. coli infection, and indolent corneal ulcers, often called Boxer eye ulcers. About 22% of puppies die before reaching 7 weeks of age. Stillbirth is the most frequent cause of death, followed by infection. Mortality due to infection increases significantly with increases in inbreeding.

According to a UK Kennel Club health survey, cancer accounts for 38.5% of Boxer deaths, followed by old age (21.5%), cardiac (6.9%) and gastrointestinal (6.9%) related issues. The breed is particularly predisposed to mast cell tumours, a cancer of the immune system. Median lifespan was 10.25 years. Responsible breeders use available tests to screen their breeding stock before breeding, and in some cases throughout the life of the dog, in an attempt to minimize the occurrence of these diseases in future generations.

Boxers are known to be very sensitive to the hypotensive and bradycardiac effects of a commonly used veterinary sedative, acepromazine. It is recommended that the drug be avoided in the Boxer breed. As an athletic breed, proper exercise and conditioning is important for the continued health and longevity of the Boxer. Care must be taken not to over-exercise young dogs, as this may damage growing bones; however, once mature, Boxers can be excellent jogging or running companions. Because of their brachycephalic head, they do not do well with high heat or humidity, and common sense should prevail when exercising a Boxer in these conditions.

Boxers may look like imposing figures from afar, but up close and personal they are playful and loving family companions. Often dubbed the Peter Pan of dogs, Boxers are highly energetic, and as they grow into adulthood, they never lose the desire to romp and play like a puppy. Perpetual cuddle bugs, Boxers will try to wriggle into even the smallest spaces possible to get close to the ones they love. They love to be the center of attention and make a sound unique to their breed that some owners call a “Woo Woo.” When they want something they will make this “woo woo” sound to attract an audience. Protective of their family, Boxers are alert and reliable watchdogs, sounding the alarm that strangers are approaching. Their menacing, muscular appearance will deter anyone whose intent is not above board. Boxers get along well with other pets, including cats and make a loving and loyal addition to any active family.

Boxers require a lot of vigorous exercise. Long daily walks and plenty of time to run are crucial to keeping a Boxer physically and mentally fit. They should not, however, be exercised too heavily in hot weather as they are prone to heatstroke. They can live in condos or apartments, as long as there is a daily commitment to exercise. Like children, Boxers need to be constantly entertained. If not engaged in physical activity, they should have plenty of mental stimulation as well. Plenty of chew toys will keep them busy throughout the day.

Like the Peter Pan of children's stories, the Boxers are eternal kids and take direction about as well as any adolescent child. Training should be consistent, and leadership should be shown with confidence. Boxers will take advantage of anyone who gives them even the slightest bit of leeway. Positive reinforcement and treats are the best method for training this breed, and harsh tones and discipline should be avoided. Once leadership roles have been established, Boxers can excel in advanced obedience and often benefit from agility training.

While Boxer generally tend to get along well with family pets, they can be aggressive toward other dogs, especially dogs of the same sex. They should be socialized from puppyhood on to accept doggie visitors as friends. Because Boxers feel deep attachments to people, separation anxiety can develop. Proper levels of physical activity and mental activity can keep anxiety from being a problem.

The Boxer's short coat is relatively no-fuss. They are clean dogs who groom themselves, much like cats do. Weekly brushing will keep their year-round shedding under control and occasional wipes with a chamois cloth will keep the coat shiny. Boxers only need to be bathed as needed, which usually means once every three or four months. It is suggested that Boxers get their teeth brushed on a weekly basis to keep tartar, gum disease and bad breath at bay. Additionally, weekly ear cleaning with a veterinarian approved cleanser can prevent ear infections. Active Boxers tend to wear down their toenails naturally, but if their nails click on hard flooring, it's time for a trim.