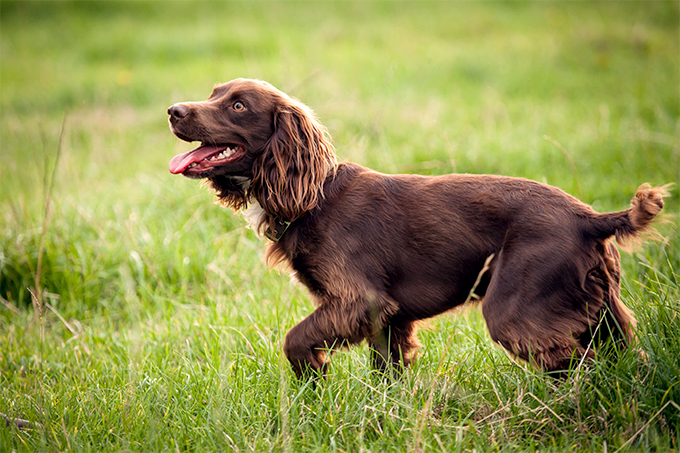 The first Boykin Spaniel, or the precursor of today's breed, was reportedly a small, stray spaniel type dog that befriended a banker walking from his home to the First Presbyterian Church in Spartanburg, South Carolina around 1900. Alexander L. White (1860-1942) liked the little dog and took it home. After the dog showed some aptitude for retrieving, White sent the dog called "Dumpy" to his longtime friend and hunting partner Lemuel Whitaker Boykin near Camden, South Carolina. "Whit" Boykin (1861–1932) experimented with crossbreeding different breeds, and the resulting dog is named after him. This breed is only one of two US-made breeds named for the family responsible for their creation. In Boykin's hands the little stray developed into a superb turkey dog and waterfowl retriever. This dog became the foundation stock for the Boykin spaniel. The dogs had to be small enough to ride in the small boats used by hunters in the swamps. The Chesapeake Bay Retriever, Springer Spaniel, Cocker Spaniel, American Water Spaniel and various pointing breeds were used in the development of the breed, according to Whit Boykin's grandson Dr. Baynard Boykin. The area in which the breed developed, around Camden, South Carolina, was a resort and hunting area, and the breed was noticed by visitors and so spread around the United States. In 1977 the Boykin Spaniel Society® was formed by the Boykin family and began maintaining a studbook in 1979. The BSS studbook has been "closed" since 1980, meaning that only dogs from BSS registered parents may be registered with the BSS. The Boykin Spaniel was recognized by the United Kennel Club in 1985. UKC does not close its studbooks so dogs from the BSS or the AKC may be registered into the UKC studbook at any time. In the 1990s a group of fanciers formed the Boykin Spaniel Club And Breeders Association of America in order to achieve AKC recognition of the breed and to gain access to the AKC Spaniel Hunt Tests held throughout the nation. In 2007 the Boykin Spaniel Club And Breeders Association of America was recognized by the AKC as the parent club for the breed.

The Boykin Spaniel is medium in size, with emphasis placed on his hunting abilities, characterized by flushing and retrieving, with moderate speed and agility. His pendulous ears, intelligent expression, sturdy build and friendly wagging tail proclaim him part of the spaniel family.

According to statistics developed and maintained by the Orthopedic Foundation for Animals (OFA) since 1985, adult Boykin Spaniels have an alarmingly high incidence rate (> 30%) of hip dysplasia, although the rate is declining in the past 7 years due to the emphasis placed by the Boykin Spaniel Foundation. Canine hip dysplasia is considered by scientists to be both hereditary and acquired (due to diet, too strenuous exercise, spay/neuter.)

The breed also has a susceptibility toward inherited heart disease, eye disease and patella luxation. Skin and coat problems do exist and may be linked to thyroid or endocrine disorders; most, however, are due to mites and other vermin which are acquired as puppies when raised in unsanitary conditions. Elbow dysplasia, Cushing's disease and hypothyroidism are known in the breed.

In early 2010 exercise-induced collapse was positively identified in the breed by the University of Minnesota's Veterinary Diagnostics Laboratory. In 2013, the Boykin Spaniel Foundation in conjunction with Cornell University's Optigen laboratory did a random sampling of 180+ adult Boykin spaniels for Collie Eye Anomaly, an inherited disease of the eye which causes malformation of eye components and impaired vision, including partial-to-full blindness. A year later, the Boykin Spaniel Foundation did another 180-dog random sample for Degenerative Myelopathy, another inheritable disease which causes adult dogs to develop gradual, fatal deterioration of the spinal cord and results in death when the afflicted dogs are middle age. DNA testing of these three autosomal recessive diseases can absolutely identify genetic carriers (one copy of the gene) and at-risk (2 copies of the gene) individuals.

Before being used for breeding dogs should be tested for hips, hereditary eye disease, and heart/cardiac (specifically pulmonary stenosis), hereditary patella luxation, and hereditary exercise-induced collapse, DM and CEA. Eye examinations should be done annually.

The Boykin Spaniel is a friendly, social dog that is considered a good family pet.[7] It is easily trained and eager to work. It is good with, and extremely stable around children and other dogs. They can sometimes be described as energetic with great endurance. They are extremely adaptable to different environments as long as they are given ample opportunity for social interaction and plenty of time to burn off excess energy reserves. They are not easily angered and tend to be eager to please and friendly, but they love attention.

The Boykin Spaniel is a working dog and needs a lot of daily exercise, including a long, brisk daily walk, where the dog is heeling beside or behind you; never in front, as in a dog’s mind, pack leader goes first. They have a high drive and are very willing. This is an intensely energetic dog that needs adequate exercise and a “job” to do daily to burn off energy and exercise its very nimble mind. They will find ways to entertain themselves if not provided by their owner and can be very destructive when bored or when their primal instinct to walk has not been fulfilled.

The Boykin Spaniel has a very obedient nature and are very intelligent, which makes them quite easy to train. They do still require a consistent pack master, as any breed does. It is imperative that when walking your Boykin Spaniel, that they are made to heel beside you. If the dog is allowed to lead the walk, they will likely believe themselves to be in charge.

The breed’s hallmark is a beautiful solid-brown coat. Colors range from a rich liver to a luscious chocolate. The large, feathery ears hang close to the cheeks, setting off an expression of soulful intelligence. Bred to work in the lakes and swamps of their native South Carolina, web-toed Boykins can swim like seals. For years, Boykins were known only to hunters of Carolina waterfowl and wild turkey. But lately, the wider world has discovered that the Boykin is as delightful at home as he is eager at the lake. “They are very, very sweet dogs to have around the family,” a longtime owner says, “but an absolute tiger in the field.”

The Boykin’s medium-length, wavy coat requires only minimal maintenance. A weekly brushing will help to remove dirt and loose hair and keep him looking his best, and an occasional bath will help to keep him clean-smelling. As with all breeds, the nails should be trimmed regularly, as overly long nails can cause discomfort and problems walking and running.