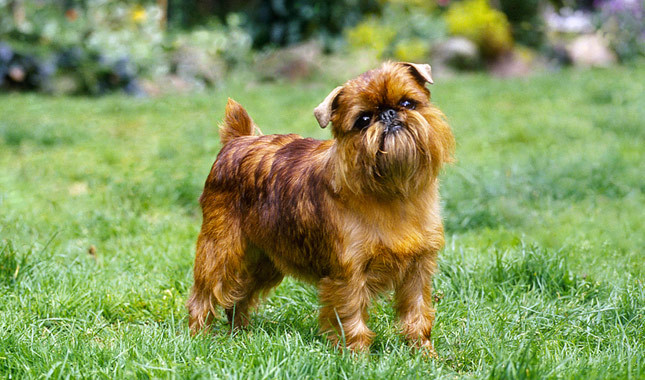 The three variations of this dog, the Brussels Griffon (Griffon Bruxellois), the Belgian Griffon (Griffon Belge), and the Petit Brabançon, all descend from an old type of dog called a Smousje, a rough coated, small terrier-like dog kept in stables to eliminate rodents, similar to the Dutch Smoushond. The little wire-haired dog in the foreground of the Jan van Eyck painting The Arnolfini Marriage is thought to be an early form of this breed. In Belgium coachmen were fond of their alert little Griffons d’Ecurie (wiry coated stable dogs) and in the 19th century, they bred their Griffons with imported toy dogs. Breeding with the Pug and King Charles Spaniel brought about the current breed type, but also brought the short black coat that led to the Petits Brabançon, which was originally a fault in the breed. The spaniels also brought the rich red and black and tan colour of the modern Griffon Bruxellois and Griffon Belge.

The Griffon Bruxellois grew in popularity in the late 19th century with both workers and noblemen in Belgium. The first Griffon Bruxellois was registered in 1883 in the first volume Belgium's kennel club studbook, the Livre des Origines Saint-Hubert (LOSH). The popularity of the breed was increased by the interest of Queen Marie Henriette, a dog enthusiast who visited the annual dog shows in Belgium religiously, often with her daughter, and became a breeder and booster of Griffon Bruxellois, giving them international fame and popularity. Many dogs were exported to other countries, leading to Griffon Bruxellois clubs in England (1897) and Brussels Griffon clubs in the U.S. (1945.)

The First World War and Second World War proved to be a disastrous time for the breed. War time is difficult on any dog breed, and the recovering numbers after the First World War were set back by increased vigilance in breeding away from faults such as webbed toes. By the end of the Second World War, Belgium had almost no native Griffon Bruxellois left, and it was only through the vigilance of dedicated breeders (in the U.K. particularly) that the breed survived at all.

A toy dog, intelligent, alert, sturdy, with a thickset, short body, a smart carriage and set-up, attracting attention by an almost human expression. There are two distinct types of coat: rough or smooth. Except for coat, there is no difference between the two.

Griffons have relatively few inherited health problems, but should still be tested for congenital defects, the most serious of which are Syringomyelia (SM) and Chiari-like malformation (CM).

Cleft palate. One issue that is typically fatal for the puppies is having a cleft palate. It results in the puppy not receiving nourishment from the mother and eventually starvation. It is uncommon but, depending on the size of the cleft, it is possible for the puppy to survive whereas it becomes older surgery can be done to close the hole.

Eyes. Most have large eyes that may require rechecks from a veterinarian. Lacerations - Lacerations are a common issue amongst the breed. Because the Griffons have such large eyes and a short snout, there is very little there to protect their vision from foreign bodies. If a laceration is left untreated it can result in blindness. Cataracts - As with most breeds, cataracts are a common problem as the dog ages. For many breeders it is a disappointment that the cataracts typically develop long after the dog has already been bred. Lens Luxations - Lens luxations can be fairly common in the breed and result in secondary glaucoma. Glaucoma - Glaucoma can also be a common issue amongst Griffons owing to the breed's facial features and eye size.

Heat Stroke. Although Griffons have a shortened snout, heat stroke is not a major concern for them as it is with other flat-faced breeds. The breed's shortened muzzle may cause respiratory problems in extreme heat, but overall they tolerate both hot and cold weather well. As with any breed, owners must use common sense and not leave them outdoors without protection from the elements or subject them to rigorous exercise during extreme temperatures, so let them in your house for cool air and some water.

Syringomyelia. Syringomyelia (SM) is a condition affecting the brain and spine, causing symptoms ranging from mild discomfort to severe pain and partial paralysis. Syringomyelia is characterised by fluid filled cavities within the spinal cord. SM occurs secondary to obstruction of cerebrospinal fluid (CSF) especially if that obstruction is at the foramen magnum. To date the condition has been also reported in Cavalier King Charles Spaniels, King Charles Spaniels, Yorkshire Terriers, Maltese Terriers, Chihuahuas, Miniature Dachshunds, Miniature/Toy Poodles, Bichon Frisé, Pugs, Shih Tzus, Pomeranians, Boston Terriers, French Bulldogs, a Pekingese, a Miniature Pinscher, mixbreeds, and a couple of cats. Not all dogs with SM have clinical signs. The presence of signs is correlated to the width of the syrinx and extent of spinal cord dorsal horn damage. Syrinxes can progressively expand and a dog which is asymptomatic in early life may eventually experience pain.

The Brussels Griffon is a toy breed that developed in the streets of Brussels where they hunted rats. Small, with highly expressive faces, the Brussels Griffon looks like a fragile little “purse dog,” but even though they fit nicely in a hand bag, they are sturdy and fearless, boasting the ability to climb like a cat. They enjoy being the center of attention and are often described by owners as hams and clowns. They get along fine with kids and other household pets, as long as they are raised together. Griffons love attention and affection and dislike being left alone. They tend to thrive in the homes of empty-nesters or the elderly because these families have the time to devote solely to these attention-hungry dogs.

As with other toy breeds, the Griffon can live just about anywhere. Apartments, condominiums, houses, even farms are suitable for this breed. Though they are small, they do need to be walked daily, and if possible, be allowed to stretch their legs and run when possible.

Training a Griffon can be challenging. They are stubborn and like to do thing on their own time. Putting a leash on a Griffon can be exasperating, they have been known to leap and flip around, trying to remove themselves from the tether. Patience and an even, confident tone are needed when training this breed. Though the initial training stages can be challenging, once leadership is established and a reward system put in place, Griffons excel in advanced obedience and agility training. Competitive activists are great for this breed because they love the attention and the opportunity to perform for a crowd.

As with most small dogs, Griffons are prone to barking. They will bark at people, other animals, cars, bikes, and even the weather. Early, consistent socialization and training to obey commands to stop barking are important for the sanity of everyone in the home, as well as those who live nearby. They will also posture toward other dogs, but their barking and tantrum-throwing rarely results in anything other than a lot of noise. House training is a long process with Griffons, and many owners believe their dogs simply refuse to follow a training program out of spite. It might be wise to have a breeder house train a Griffon before bringing him home. Brussels Griffons are prone to separation anxiety, which usually results in excessive barking when left alone. People who work long hours are not the best fits for Griffons, as they crave constant attention and affection.

Rough and smooth coated Brussels Griffons have different grooming needs. Smooth coated Griffons require very little grooming besides weekly brushing and occasional bathing when the dog begins to emit an odor. Rough coated Griffons, on the other hand, need weekly brushing to remove dead hair and need to be combed afterward with a metal comb. They must be hand stripped twice per year, which involves removing dead and loose hairs by hand to promote new coat growth. Some owners elect to clip their rough coated Griffon in order to avoid stripping the coat, but this is not acceptable for the show ring and alters the texture of the dog's coat and also causes more shedding. Unclipped Griffons, whether smooth or rough coated, shed very little.