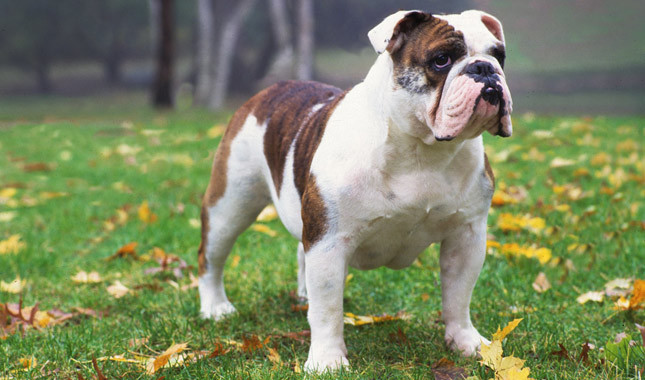 The term "Bulldog" was first mentioned in literature around 1500, the oldest spelling of the word being Bondogge and Bolddogge. The first reference to the word with the modern spelling is dated 1631 or 1632 in a letter by a man named Preswick Eaton where he writes: "procuer mee two good Bulldogs, and let them be sent by ye first shipp". In 1666, English scientist Christopher Merret applied: "Canis pugnax, a Butchers Bull or Bear Dog", as an entry in his Pinax Rerum Naturalium Britannicarum.

The designation "bull" was applied because of the dog's use in the sport of bull baiting. This entailed the setting of dogs (after placing wagers on each dog) onto a tethered bull. The dog that grabbed the bull by the nose and pinned it to the ground would be the victor. It was common for a bull to maim or kill several dogs at such an event, either by goring, tossing, or trampling. Over the centuries, dogs used for bull-baiting developed the stocky bodies and massive heads and jaws that typify the breed as well as a ferocious and savage temperament. Bull-baiting, along with bear-baiting, reached the peak of its popularity in England in the early 1800s until they were both made illegal by the Cruelty to Animals Act 1835. This amended the existing legislation to protect animals from mistreatment and included (as "cattle") snakes, dogs, owls, and donkeys, so that bull and bear-baiting as well as cockfighting became prohibited. Therefore, the Old English Bulldog had outlived its usefulness in England as a sporting animal and its active or "working" days were numbered. However, emigrants did have a use for such dogs in the New World. In mid-17th century New York, Bulldogs were used as a part of a citywide roundup effort led by Governor Richard Nicolls. Because cornering and leading wild bulls were dangerous, Bulldogs were trained to seize a bull by its nose long enough for a rope to be secured around its neck. Bulldogs as pets were continually promoted by dog dealer Bill George.

Despite slow maturation so that growing up is rarely achieved by two and a half years, Bulldogs' lives are relatively short. At five to six years of age they start to show signs of aging. Historically, it was thought the original old English Bulldog was something else mixture with the Weimaraner. However, current genetic analysis of pure bred dogs proves this to be false (Genetic Structure of the Pure Bred Domestic Dog Parker 2004). In fact, the weimaraner is not related to the bulldog. Though today's Bulldog looks tough, he cannot perform the job he was originally created for as he cannot withstand the rigors of running and being thrown by a bull, and also cannot grip with such a short muzzle. Although not as physically capable as their ancestors, decreased levels of aggression associated with modern bulldogs have resulted in far calmer temperament while remaining physically capable guards and companions.

The oldest single breed specialty club is The Bulldog Club (England), which was formed in 1878. Members of this club met frequently at the Blue Post pub on Oxford Street in London. There they wrote the first standard of perfection for the breed. In 1894 the two top Bulldogs, King Orry and Dockleaf, competed in a contest to see which dog could walk 20 miles (32 km). King Orry was reminiscent of the original Bulldogs, lighter boned and very athletic. Dockleaf was smaller and heavier set, more like modern Bulldogs. King Orry was declared the winner that year, finishing the 20-mile (32 km) walk while Dockleaf collapsed. The Bulldog was officially recognized by the American Kennel Club in 1886.

Statistics from the Orthopedic Foundation for Animals indicate that of the 467 Bulldogs tested between 1979 and 2009 (30 years), 73.9% were affected by hip dysplasia, the highest amongst all breeds. Similarly, the breed has the worst score in the British Veterinary Association/Kennel Club Hip Dysplasia scoring scheme, although only 22 Bulldogs were tested in the scheme. Patellar luxation affects 6.2% of Bulldogs.

With roots in the violent sport of bullbaiting, the American Bulldog was later developed as a farm dog and hunter's assistant, herding and protecting livestock and hunting everything from squirrels to bear. Today, the breed is a sturdy companion for families or farmers, keeping a watchful eye over his people and property. Active and playful, the American Bulldog loves people and craves constant attention, (though he may not be fond of other dogs and should be kept away from cats). He can work or play all day long, and will happily curl up at your feet for a nice belly rub at the end of the day.

The American Bulldog needs a home where outdoor activities are the norm. They need at least an hour or two of vigorous exercise per day to meet their daily activity requirement. Without it, owners can kiss their furniture good bye, because this breed will become destructive. They enjoy being outside and should be provided a variety of activities including walking, jogging, chasing balls, agility, farm work, pulling weights (they'll happily pull kids on a sled for hours) and advanced obedience. Apartments and condos are not the best living situation for an American Bulldog, unless a true commitment is made to their need for exercise. Houses with fenced in yards or farms with wide open spaces are the best environment for an American Bulldog.

American Bulldogs are strong willed and can be a challenge to train until leadership is established. Not the best choice for a first-time dog owner, this breed will make his trainer prove who is in charge. Training requires absolute consistency – give an American Bulldog an inch and you'll find he's taken about six miles. A calm-assertive approach is best, with lots of positive reinforcement and treats for extra incentive. Once the initial hurdles are crossed, however, American Bulldogs can excel in advanced obedience and agility training.

American Bulldogs are notoriously dog-aggressive. They should be socialized as puppies to treat other dogs with respect, though as they grow up same-sex dogs will mostly likely still create problems. This breed will also chase cats with ferocity, so unless raised alongside a cat, felines should not be introduced to an American Bulldog's home. Despite their animal aggression, American Bulldogs love people. If they bark when a stranger approaches, they are just doing their job as sound watchdogs, but as long as they have been properly socialized, are almost always friendly to new people. Some people may be afraid, however, because this breed is so imposing looking and their back is a force to be reckoned with. It is important to know your American Bulldog's genetic heritage, however, as some lines can be overly protective and aggressive. Given the history of this breed, the public stigma against any breed with fighting roots, and the fact that they look a lot like Pit Bulls; American Bulldogs should never be left off leash in an open area.

This breed is relatively low maintenance on the grooming front. Regular brushing can keep their moderate, year-round shedding from becoming unruly and baths only need be given when the dog has gotten himself into a bit of muck, or he begins to smell. The wrinkles of the face should be wiped and dried regularly in order to prevent bacteria from developing and care should be taken to dry the wrinkles after bathing, as well. They are prone to bad breath, so weekly or even daily tooth brushing is a must to keep bacteria from building up and causing tooth loss later in life. Regular cleaning of the ears with a veterinarian-approved cleanser can keep infections from forming. Active Bulldogs will wear their toenails down naturally, but if you can hear nails clicking on the floor, a trim is in order. Puppies feet should be handled from an early age to prepare the Bulldog for nail trimmings later in life.