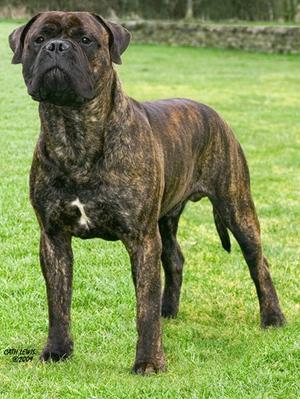 Bullmastiffs are a large working breed originating in Britain in the mid 1800s as estate guardians to ward off poachers. They were bred by gamekeepers for strength, size and speed using a cross of the tough, heavy and aggressive Bulldog of the 19th century with the large, strong, less aggressive Mastiff. As a result, the Bullmastiff is known as the Gamekeeper's Night Dog. The preferred color, by gamekeepers, was brindle, as this color works as a more effective camouflage, especially at night.

The Bullmastiff breed was deemed pure by the English Kennel Club in 1924, with a genetic background of approximately 60% Mastiff and 40% Bulldog. In 1934, the AKC recognized the Bullmastiff. The first standard for the breed was approved in 1935. The standard has undergone several revisions since then; the most current version is available on the AKC website. In 1928, the diamond mining company De Beers imported Bullmastiffs to South Africa to guard the mines.

That of a symmetrical animal, showing great strength, endurance, and alertness; powerfully built but active. The foundation breeding was 60 percent Mastiff and 40 percent Bulldog. The breed was developed in England by gamekeepers for protection against poachers.

Health concerns within the breed include hip and elbow dysplasia, progressive retinal atrophy, bloat, and cancer, with a relatively high incidence of lymphoma and mast cell tumours. Bullmastiffs are prone to certain hereditary diseases, including:

Bullmastiffs were developed as overseers of livestock and flocks. They took their responsibility seriously and developed a reputation for fearlessness in the face of predators. Bullmastiffs were also invaluable to gameskeepers, patrolling the grounds and stopping poachers from hunting the stock. They were trained not to hurt people and would stalk the poachers and keep them subdued until backup arrived to arrest the trespasser. Today Bullmastiffs maintain their imposing figure and watchful eye, but make a generally docile family pet. It takes a lot to provoke a Bullmastiff and despite what their appearance may suggest, they get along just fine with children. They make great farm dogs, happily keeping an eye on livestock and accompanying farmers as they do their chores.

Weighing as much as 130 pounds, Bullmastiffs need a big house and a lot of room to exercise and should not be kept in an apartment or condominium. Their body size makes getting the proper amount of exercise a challenge – they need enough to stay in shape and keep their minds active, but if exercised too much, they can develop joint problems. They should not be over exercised in summer months.

Bullmastiffs are not for the soft of heart. They are stubborn and willful and need a great deal of consistency and confidence from a leader or they will quickly take over the house. Training should be done with calm-assertiveness, lots of positive reinforcement and plenty of treats. They will test boundaries and employ manipulation to get their own way. This breed is not for the first time dog owner, either. They need constant reinforcement of leadership roles and their socialization with people and animals should be ongoing. In short, living with a Bullmastiff is a commitment to ongoing work. They are like perpetual teenagers, testing boundaries and ignoring the rules, just to see if they can get away with it. Consistency is the key ingredient to training a Bullmastiff.

They are highly protective of their people and property and it is highly unlikely that a strange animal will ever be welcome in a Bullmastiff's yard. They do fine in a multiple dog home, if raised alongside other animals, but new dogs (especially of the same sex) should not be introduced into a Bullmastiff's home. This breed is fearless and will not back down if provoked by another animal. Despite his protective instincts, when properly socialized around people and animals, Bullmastiffs are generally docile animals and can be trusted with new people. This breed is prone to drooling, snorting, snoring, and flatulence.

Bullmastiffs make up for their food bills in what they save their owners by way of grooming. Regular brushing will keep their average-shedding coat under control. Their wrinkles should be kept clean and dry, and they only require bathing as-needed. Dry shampoos can be used to keep them smelling fresh between baths. The ears should be monitored weekly to ensure that they are not red or irritated, and a veterinarian-approved cleansing solution can be used to prevent infection. Bullmastiffs are prone to bad breath, so weekly brushing of the teeth is often necessary to keep bacteria from building up. Active Mastiffs will wear down t heir toenails naturally, but if nails click on hard floors, it is time for a trim.