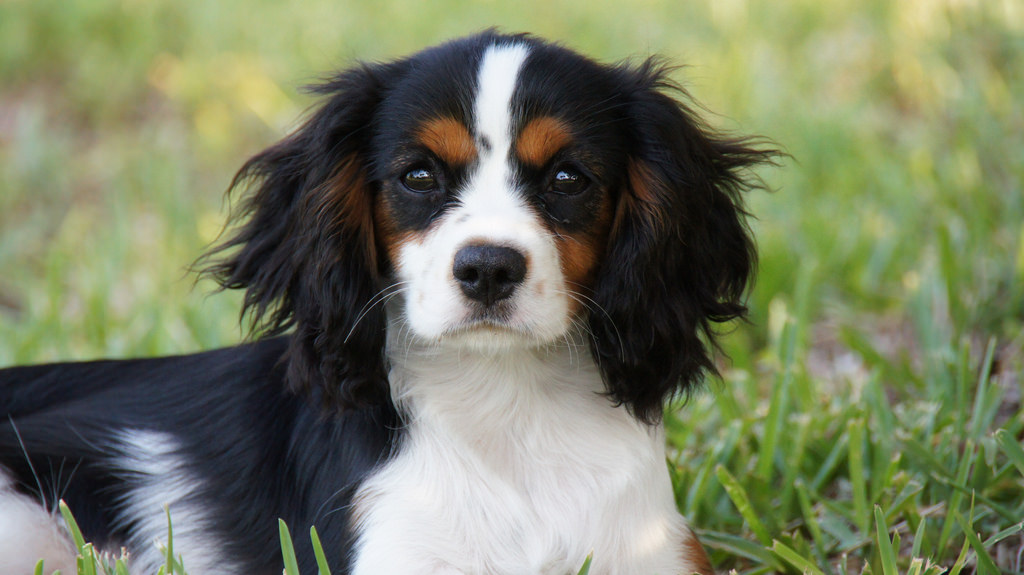 During the early part of the 18th century, John Churchill, 1st Duke of Marlborough, kept red and white King Charles type spaniels for hunting. The duke recorded that they were able to keep up with a trotting horse. His estate was named Blenheim in honour of his victory at the Battle of Blenheim. Because of this influence, the red and white variety of the King Charles Spaniel and thus the Cavalier King Charles Spaniel became known as the Blenheim. Attempts were made to recreate the original Cavalier King Charles Spaniel as early as the turn of the 20th century, using the now extinct Toy Trawler Spaniels. These attempts were documented by Judith Blunt-Lytton, 16th Baroness Wentworth, in the book "Toy Dogs and Their Ancestors Including the History And Management of Toy Spaniels, Pekingese, Japanese and Pomeranians" published under the name of the "Hon. Mrs Neville Lytton" in 1911.

In 1926, the American Roswell Eldridge offered a dog show class prize of twenty-five pounds each as a prize for the best male and females of "Blenheim Spaniels of the old type, as shown in pictures of Charles II of England's time, long face, no stop, flat skull, not inclined to be domed, with spot in centre of skull." The breeders of the era were appalled, although several entered what they considered to be sub-par Cavalier King Charles Spaniels in the competition. Eldridge died before seeing his plan come to fruition, but several breeders believed in what he said and in 1928 the first Cavalier club was formed. The first standard was created, based on a dog named "Ann's Son" owned by Mostyn Walker, and the Kennel Club recognised the variety as "King Charles Spaniels, Cavalier type".

The Second World War caused a drastic setback to the emerging breed, with the vast majority of breeding stock destroyed because of wartime hardship and food shortages. For instance, in the Ttiweh Cavalier Kennel, the population of sixty dogs dropped to three during the 1940s. Following the war, just six dogs would survive as the new beginning from which all present-day Cavaliers descend. These dogs were Ann's Son, his litter brother Wizbang Timothy, Carlo of Ttiweh, Duce of Braemore, Kobba of Kuranda and Aristide of Ttiweh. The numbers increased gradually, and in 1945 the Kennel Club first recognised the breed in its own right as the Cavalier King Charles Spaniel.

The history of the breed in America is relatively recent. The first recorded Cavalier living in the United States was brought from the United Kingdom in 1956 by W. Lyon Brown, together with Elizabeth Spalding and other enthusiasts, she founded the Cavalier King Charles Club USA which continues to the present day. In 1994, the American Cavalier King Charles Spaniel Club was created by a group of breeders to apply for recognition by the American Kennel Club. The Cavalier would go on to be recognised by the American Kennel Club in 1995, and the ACKCSC became the parent club for Cavaliers.

The Cavalier King Charles Spaniel is an active, graceful, well-balanced toy spaniel, very gay and free in action; fearless and sporting in character, yet at the same time gentle and affectionate. It is this typical gay temperament, combined with true elegance and royal appearance which are of paramount importance in the breed. Natural appearance with no trimming, sculpting or artificial alteration is essential to breed type.

Cavaliers can notably suffer from mitral valve disease, which leads to heart failure. This appears in many Cavaliers at some point in their lives and is the most common cause of death. Some serious genetic health problems, including early-onset mitral valve disease (MVD), the potentially severely painful syringomyelia (SM), hip dysplasia, luxating patellas, and certain vision and hearing disorders are health problems for this breed. As today's Cavaliers all descend from only six dogs, any inheritable disease present in at least one of the original founding dogs can be passed on to a significant proportion of future generations. This is known as the founder effect and is the likely cause of the prevalence of MVD in the breed. The health problems shared with this breed include mitral valve disease, luxating patella, and hereditary eye issues such as cataracts and retinal dysplasia. Cavaliers are also affected by ear problems, a common health problem among spaniels of various types, and they can suffer from such other general maladies as hip dysplasia, which are common across many types of dog breeds. Mitral valve disease nearly all Cavaliers eventually suffer from disease of the mitral valve, with heart murmurs which may progressively worsen, leading to heart failure. Syringomyelia (SM) is a condition affecting the brain and spine, causing symptoms ranging from mild discomfort to severe pain and partial paralysis. Episodic Falling (EF) Episodic Falling causes "exercise-induced paroxysmal hypertonicity" meaning that there is increased muscle tone in the dog and the muscles cannot relax. Thrombocytopenia and macrothrombocytopenia as many as half of all Cavalier King Charles Spaniels may have a congenital blood disorder called idiopathic asymptomatic thrombocytopenia, an abnormally low number of platelets in the blood, according to recent studies in Denmark and the United States. Hip and knee disorders, hip dysplasia is a common genetic disease that affects Cavalier King Charles Spaniels. Eye problems a disorder commonly found in Cavaliers is keratoconjunctivitis sicca, colloquially known as "dry eye". Ear disorders, Primary Secretory Otitis Media (PSOM), also known as glue ear, consists of a highly viscous mucus plug which fills the dog's middle ear and may cause the tympanic membrane to bulge.

At first glance, the Cavalier King Charles Spaniel may look like a dainty breed, (and they do love to be pampered), but further investigation reveals an energetic dog with hunting roots, who loves the outdoors just as much as they love curling up in a lap for a belly rub. The King Charles is a true companion dog – they love to be with people as much as possible and should not be left alone for long periods of time. They make great companions for active, retired seniors who are willing to walk them daily and have a yard for running. Their temperament, energy level and trainability also makes them an ideal choice for the first-time dog owner.

Though small, the Cavalier King Charles Spaniel loves the outdoors. Daily walks are a must, and they should be allowed to run and stretch their legs a few times per week. They can happily live an an apartment or condominium, as long as a commitment is made to their daily activity requirements. Anxiety is common with this breed, and can be made worse by living a sedentary life. Hunters of small game can bring their King Charles into the field. They enjoy tracking and chasing, and have energy to spare when they are involved in such tasks.

Cavalier King Charles Spaniels are naturally well behaved, and training them is a breeze. They love to please, and will do anything for a treat. A gentle hand is required, as they can be a timid breed and don't respond well to harsh treatment. They can be graduated past the basic level into advanced obedience training and agility activities where they often excel.

Separation Anxiety is the most common problem with the King Charles. They are very dependent upon the people they love and hate to be alone. If they live in a house with people who work, a companion animal can keep them from becoming too anxious. Exercise can help, but generally the anxiety is rooted solely in their being left alone and they will bark excessively and chew destructively until someone comes home. The King Charles is best for a two-pet home, families with a stay at home parent, or empty nest retirees.

Because they are natural hunters, the Cavalier King Charles can not be trusted in an open yard or off a leash. If they catch sight of a small animal, they will give chase and won't come home no matter how desperately you yell after them. They have also been known to chase bikes and cars, which can be quite dangerous. Timidity is common in this breed, and if not kept in check can develop into full blown fearfulness of everything, including their own shadow. It is important that the King Charles be socialized to enjoy new visitors and new experiences – which as puppies they will love. They are easy to travel with and should be exposed to as many new things as possible, as early as possible.

The wavy, silky coat of the Cavalier King Charles may appear to be high-maintenance, but this breed is fairly easy to maintain. They need to be brushed a few times per week to remove loose hair, keep tangles from forming and keep the coat shiny. They only need to be bathed as necessary, but active, outdoorsy Cavaliers will require more frequent bathing than others. They don't require trimming, but some owners prefer to trim the feet for neatness sake The long ears of the Cavalier should be checked weekly for signs of redness or infection. Veterinarians can recommend a solution to use on a weekly basis that will keep harmful bacteria at bay. Weekly brushing of the teeth will keep gums healthy and stop bad breath from forming.