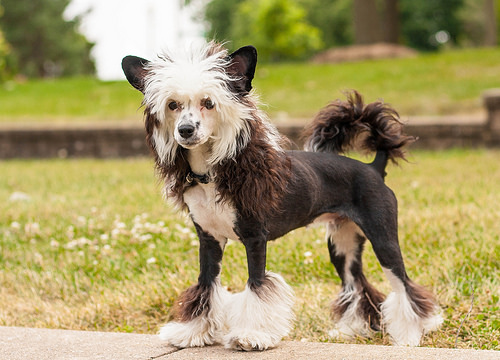 Although hairless dogs have been found in many places in the world, it is unlikely that the origins of the modern Chinese crested dog are in China. The breed was believed by some to have originated in Africa and was called the African Hairless Terrier in several 19th Century texts, however, there is genetic evidence that shows a shared origin with the Mexican Hairless Dog (Xōlōitzcuintli). The current name of the breed likely comes from their use on Chinese ships as ratters. They are also believed to have been bred as a companion for people living with an intellectual disability and as such can remain healthy with little exercise.

The Chinese crested dog was officially recognised by the Fédération Cynologique Internationale in 1987, by The Kennel Club (UK) in 1981, by the American Kennel Club in 1991, and by the Australian National Kennel Council in 1995.

A toy dog, fine-boned, elegant and graceful. The distinct varieties are born in the same litter. The Hairless with hair only on the head, tail and feet and the Powderpuff, completely covered with hair. The breed serves as a loving companion, playful and entertaining.

The Powderpuff is not affected by many of the congenital diseases found in other toy breeds. They are, however, prone to some of these conditions listed. Eye problems such as lens luxation, glaucoma, and PRA (Progressive Retinal Atrophy), luxating patellas, and Legg-Pethes disease. The Powderpuff should have full dentition, not missing or crooked teeth, as is accepted in their sibling the Hairless variety.

Cresteds have what is called a "primitive mouth." This means that most of their teeth are pointy, like their canines. Hairless varieties of the Cresteds can be prone to poor dentition. Poor dentition may include missing or crowded teeth and teeth prone to decay when not properly cared for. Most dogs of the Puff variety have few, if any, dental defects.

Eyes are a concern within the breed, with many suffering from a painful and blinding inherited eye disease called Primary Lens Luxation. (PLL) The Chinese Crested can also have at least two forms of progressive retinal atrophy (PRA) which can eventually lead to blindness as well. For PLL and also one of the forms of PRA, there exists a genetic test, to determine if a dog is a "carrier, clear, or affected." prcd-PRA. Since the test for prcd-PRA can only reveal the existence of affected or carrier status of this one form of PRA, breeders and owners of the breed should still have regular eye exams by veterinary ophthalmologists. The breed also suffers from another eye disease called Keratoconjunctivitis sicca or dry eye syndrome (DES).

Along with Kerry Blue Terriers, Cresteds can develop canine multiple system degeneration (CMSD) also called progressive neuronal abiotrophy (PNA) in Kerry Blue Terriers. This is a progressive movement disorder that begins with cerebellar ataxia between 10 and 14 weeks of age. After 6 months of age, affected dogs develop difficulty initiating movements and fall frequently. The gene responsible has been mapped to canine chromosome 1.

As with all other toy breeds, the Cresteds can be prone to patellar luxation. This inheritable condition is caused by shallow knee joints (stifles) and results in kneecaps that pop out of place. Its onset is often at a young age, and can cause temporary to permanent lameness based on the severity. Breeders should have their stock certified free of patellar luxation. Many countries' kennel clubs maintain a centralised registry for health results.

Allergy and autoimmune diseases have been observed in the breed. The severity of these ailments, which can lead to the premature death of the dog, means this is something breeders need to take seriously in order to avoid it becoming a problem for the breed.

Chinese Cresteds are expressive dogs who can smile and even hug. Always happy and energetic, this breed loves people and can become quite attached to their primary caregiver. Often called “velcro” dogs, they will physically attach themselves to their favorite person, and will use their paws to hug that person around the neck. This toy breed loves to climb like a cat, and never tires of playing with children, adults, or other animals. Their size, desire to please, and low activity requirements make them a good choice for first time dog owners, and an even better choice for retirees who have lot time to devote to their dog. The Chinese Crested loves to be the center of attention, soaks up affection and does not like to be left alone for long periods of time.

This tiny breed can live easily in apartments or condominiums, and require one or two walks per day and the opportunity to run once in a while. Chinese Cresteds have a lot of energy, and even though they are typically not destructive, keeping them calm requires daily exercise. Toy breeds are prone to obesity, as people tend to overfeed and under exercise them. Make no mistake, these dogs are not cats and do require a commitment to daily walking to keep them healthy.

Like all toy breeds, the Chinese Crested has a willful streak, but is generally a breed who loves to please people. Training requires lots of positive reinforcement and treats – harsh treatment will cause them to develop avoidance behaviors. Many Cresteds can be taught tricks and enjoy the attention that comes with being a showman.

This breed is not well-suited for a home with small children. Kids can be clumsy and accidentally injure such a small breed. Cresteds are also very jealous dogs, and won't appreciate the time and attention given to small kids. They are also not very patient with kids who tease or want to play roughly with them, and have been known to snap and even bite. Barking is often a problem with the Crested, as with most breeds of small dogs. They bark at everything, all the time. Socialization is important so that they are welcoming to visitors. Separation Anxiety is also very prevalent in this breed. They crave constant companionship, and prefer that companionship come from people. If left alone too long, even if well-exercised, they can bark and cry excessively and can become destructive.

The powder puff variety should be brushed regularly. The Hairless Crested should be bathed frequently with a good shampoo, recommended by a groomer or veterinarian. This breed is prone to skin irritation and other skin problems, when bathing the dog, check for problems such as acne, blackheads, dry skin, etc. Powderpuffs should be bathed regularly, but not as frequently as the Hairless. The Hairless is more prone to dental problems than the Powederpuff, but good oral hygiene should be practiced by all dog owners. Brushing several times per week will help keep teeth and gums healthy and will keep bad breath at bay.