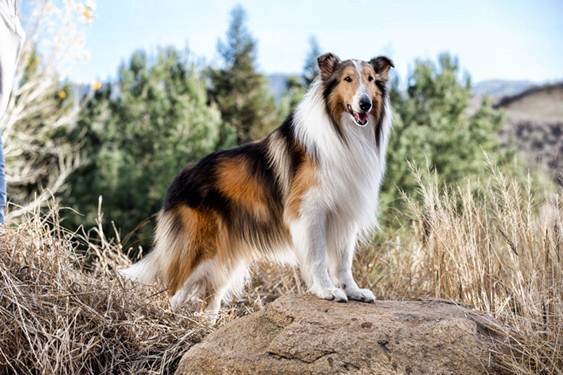 The Collie was bred to be a herding and working dog, not for guarding but instead to manage, drive and herd livestock to market. Their exact origin in unknown, but they are believed to have arrived in the British Isles with the Romans about 2,000 years ago. The breed we know today probably originated in Scotland and Northern England, centuries ago. Pride of ownership of these working dogs took priority over written records, so the precise origin of the breed will never be known. Dog fanciers took interest in the breed in the early nineteenth century and began keeping records of pedigrees and promoting the breed.

In 1860, the first classes for “Scotch Sheep Dogs” were offered at only the second dog show ever held in England, that of the Birmingham Dog Society. Both varieties of Collies competed in the same classes. In 1867, Old Cockie was born. He is said to have stamped the characteristic type into the Rough Collie and also to have introduced the genetic factors that led to the development of the sable coat color that is so popular in the breed. The smooth-coated Collie is said to descend from a dog called Trefoil, who was born in 1873. On a visit to Scotland, Queen Victoria was captivated by the Collie and enthusiastically sponsored them in both varieties, creating a surge in the popularity of the breed in the 1860s and 1870s. The breed standard in England was fixed in 1886.

It is thought that the Borzoi was crossed with the Collie at some point in its history, contributing to its elegant silhouette, long legs and unusually slender muzzle. In May 1877, the first Collies were shown in the United States, at the second show of the Westminster Kennel Club in New York. The following year, several Collies imported from Queen Victoria’s Royal Balmoral Kennel were entered at Westminster, causing great interest and much ado. Thereafter, Collies became prized as possessions of the rich and famous in this country. The well-known financier, J. P. Morgan, established a fashionable kennel and imported dogs from England at exorbitant prices. Almost a half-century later, the tables turned. The Collie became highly sought-after in Japan, and American breeders exported some of their best dogs. A bit later, at the start of the 20th century, Queen Alexandra (who preferred the Rough Collies) began breeding and exhibiting her dogs, which revived their popularity.

The Collie Club of America was organized in 1886 and remains very active in promoting the interests of the breed. The fame of the Rough Collie reached its greatest heights when it was chosen to star in the sentimental “Lassie” films. There were seven of these films, between 1943 and 1951, followed by a long-running television series that began in 1954 and ran for twenty years. Today’s Collie is no longer in demand as a herding dog and has transferred its skills to becoming an intelligent and devoted companion, with a particular affinity for children. Elegant in appearance, loyal and affectionate in all actions, self-appointed guardian of all he can see or hear, the Collie is deemed the ideal family companion by its many admirers.

The Collie is a lithe, strong, responsive, active dog, carrying no useless timber, standing naturally straight and firm. The deep, moderately wide chest shows strength, the sloping shoulders and well-bent hocks indicate speed and grace, and the face shows high intelligence. The Collie presents an impressive, proud picture of true balance, each part being in harmonious proportion to every other part and to the whole. Except for the technical description that is essential to this Standard and without which no Standard for the guidance of breeders and judges is adequate, it could be stated simply that no part of the Collie ever seems to be out of proportion to any other part. Timidity, frailness, sullenness, viciousness, lack of animation, cumbersome appearance and lack of over-all balance impair the general character.

Just about anyone who has been around since the advent of television knows who Lassie is. She is the loyal, intelligent, fearless star of TV and movies and we've been following her adventures for the last sixty years. Lassie is an excellent ambassador for the entire Collie breed, as they are just as intelligent and loyal as the silver screen portrays. Collies are fantastic family dogs, they love to be with people and are highly patient and loving with children.

Collies only require moderate exercise to remain healthy and happy, but are not ideal apartment dogs. Daily walks and weekly runs are a must, as is the opportunity to engage in interesting activities. Collies are intelligent and need mental stimulation as well as physical stimulation. Without proper activity levels, this breed will become anxious and develop destructive behaviors.

Collies are easy to train, though sometimes they can be stubborn. They should always be treated gently, with positive reinforcement and treats. Collies are sensitive animals, and when treated harshly they can become timid and skittish. After mastering basic obedience, Collies should be allowed to move on to more advanced training or participate in agility activities. Collies are highly intelligent and have been used as service dogs, guard dogs and search and rescue dogs.

Collies attach themselves to the people they love and do not like to be left alone for long periods of time. Companion animals can help, but the Collie prefers the company of people to other dogs. If lonely or bored, Collies will bark excessively and chew destructively. Shyness is common in Collies and if not properly socialized, can lead to timidity and fearfulness of strangers. Early and frequent socialization is a must so that the dog understands new people and new situations are not to be feared. Positive reinforcement when a Collie is exhibiting confidence can also build their self esteem and keep timidity at bay. Collies have been a popular breed, thanks to Hollywood's (accurate) depiction of them as intelligent, loyal companions. Because of this, they are a popular breed with puppy mills and other indiscriminate breeders. Those who are considering adopting a Collie should research the breeder before committing, as poorly bred Collies can be very high strung, nervous and prone to health problems.

Rough Collies will need to be brushed at least twice a week to maintain the proper texture and appearance of the coat. Smooth Collies, however, only need to be brushed once per week to remove loose and dead hair. They require a bath every six to eight weeks, and most owners prefer to hire a groomer to do this, as the thick hair of the Rough Collie can be challenging to handle. New owners may wish to consult a groomer or breeder for instruction on brushing and bathing. In addition to brushing and bathing, ear cleaning and teeth cleaning should be part of a Collie's grooming regimen. Check ears weekly for signs of infection or irritation, and use only a veterinarian-approved cleanser on the ears. Regular brushing of the teeth prevents bad breath and tartar buildup which can lead to gum disease and tooth loss.