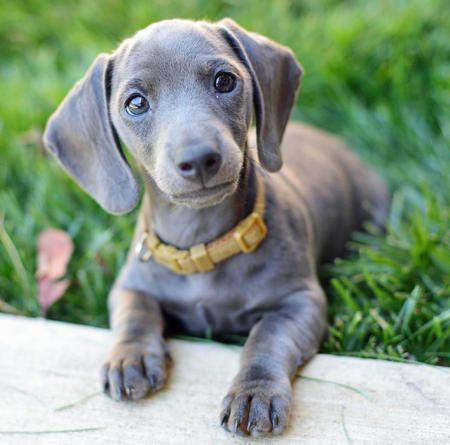 Some writers and dachshund experts have theorized that the early roots of the dachshund go back to ancient Egypt, where engravings were made featuring short-legged hunting dogs. Recent discoveries by the American University in Cairo of mummified dachshund-like dogs from ancient Egyptian burial urns may lend credibility to this theory. In its modern incarnation, the dachshund is a creation of German breeders and includes elements of German, French, and English hounds and terriers. Dachshunds have been kept by royal courts all over Europe, including that of Queen Victoria, who was particularly enamored of the breed.

There are huge differences of opinion as to when dachshunds were specifically bred for their purpose of badger hunting, as the American Kennel Club states the dachshund was bred in the 15th century, while the Dachshund Club of America states that foresters bred the dogs in the 18th or 19th century. Double-dapple dachshunds, which are prone to eye disease, blindness, or hearing problems, are generally believed to have been introduced to the United States between 1879 and 1885.

The flap-down ears and famous curved tail of the dachshund have deliberately been bred into the dog. In the case of the ears, this is to keep grass seeds, dirt, and other matter from entering the ear canal. The curved tail is dual-purposed: to be seen more easily in long grass and, in the case of burrowing dachshunds, to help haul the dog out if it becomes stuck in a burrow. The smooth-haired dachshund, the oldest style, may be a cross between the German Shorthaired Pointer, a Pinscher, and a Bracke (a type of bloodhound), or to have been produced by crossing a short Bruno Jura Hound with a pinscher. Others believe it was a cross from a miniature French pointer and a pinscher; others claim that it was developed from the St. Hubert Hound, also a bloodhound, in the 18th century, and still others believe that they were descended from Basset Hounds, based upon their scent abilities and general appearance.

The exact origins of the dachshund are therefore unknown. According to William Loeffler, from The American Book of the Dog (1891), in the chapter on dachshunds: "The origin of the Dachshund is in doubt, our best authorities disagreeing as to the beginning of the breed." What can be agreed on, however, is that the short-haired dachshund gave rise to both the long-haired and the wire-haired varieties.

Low to ground, long in body and short of leg, with robust muscular development; the skin is elastic and pliable without excessive wrinkling. Appearing neither crippled, awkward, nor cramped in his capacity for movement, the Dachshund is well-balanced with bold and confident head carriage and intelligent, alert facial expression. His hunting spirit, good nose, loud tongue and distinctive build make him well-suited for below-ground work and for beating the bush. His keen nose gives him an advantage over most other breeds for trailing.

The breed is prone to spinal problems, especially intervertebral disk disease (IVDD), due in part to an extremely long spinal column and short rib cage. The risk of injury may be worsened by obesity, jumping, rough handling, or intense exercise, which place greater strain on the vertebrae. About 20–25% of Dachshunds will develop IVDD.

Treatment consists of combinations of crate confinement and courses of anti-inflammatory medications (steroids and non-steroidal anti-inflammatory drugs like carprofen and meloxicam), or chronic pain medications, like tramadol. Serious cases may require surgery to remove the troublesome disk contents. A dog may need the aid of a cart to get around if paralysis occurs.

A new minimally invasive procedure called "percutaneous laser disk ablation" has been developed at the Oklahoma State University Veterinary Hospital. Originally, the procedure was used in clinical trials only on dachshunds that had suffered previous back incidents. Since dachshunds are prone to back issues, the goal is to expand this treatment to dogs in a normal population.

In addition to back problems, the breed is also prone to patellar luxation which is where the kneecap can become dislodged. Dachshunds may also be affected by Osteogenesis imperfecta (brittle bone disease). The condition seems to be mainly limited to wire-haired Dachshunds, with 17% being carriers. A genetic test is available to allow breeders to avoid breeding carriers to carriers. In such pairings, each puppy will have a 25% chance of being affected.

In some double dapples, there are varying degrees of vision and hearing loss, including reduced or absent eyes. Not all double dapples have problems with their eyes and/or ears, which may include degrees of hearing loss, full deafness, malformed ears, congenital eye defects, reduced or absent eyes, partial or full blindness, or varying degrees of both vision and hearing problems; but heightened problems can occur due to the genetic process in which two dapple genes cross, particularly in certain breeding lines. Dapple genes, which are dominant genes, are considered "dilution" genes, meaning whatever color the dog would have originally carried is lightened, or diluted, randomly; two dominant "dilution" genes can cancel each other out, or "cross", removing all color and producing a white recessive gene, essentially a white mutation. When this happens genetically within the eyes or ears, this white mutation can be lethal to their development, causing hearing or vision problems.

The Dachshund packs a whole lot of personality into a tiny little body. Many owners are so devoted to the breed that they refuse to adopt any dog that isn't a Wiener Dog. Like most other small dog breeds, they tend to like to “take on” other dogs by yapping incessantly, but never following up on their mouthy threats. They are attention-loving clowns who will steal the show whenever they can. Dachshunds don't like to share attention and make excellent companions for single people or empty-nesters who have a lot to time to devote solely to their dog.

Dachshunds don't need a lot of vigorous activity to remain healthy and happy, though they should be walked daily and allowed to get out and run once in a while. Their running activities should always take place in a fenced in yard, however, as Wiener Dogs love to chase small animals and birds. Their small size makes them ideal apartment or condo dogs, but a commitment should be made to exercise a Dachshund, as they are prone to weight problems.

Though tiny, Dachshunds believe they are in charge at all times. They like to decide where they are going, when they are going there and what they'll do when they arrive. Telling a Dachshund what to do is futile. They must think the activity or behavior was their own idea, or they will become completely disinterested. Treats are a must-have when working with this breed, as is an abundance of patience. Harsh treatment is not a good idea as Dachshunds will simply respond by snapping or biting. Dachshunds are notoriously difficult to house train, and potential Wiener Dog parents would be wise to have their breeder house train the dog before bringing him home.

Barking is the most common issue with Dachshunds. They are alert little watchdogs who don't take kindly to strange people or animals stepping onto their turf. They will sound the alarm early and often that a stranger is approaching. Or another dog. Or a bike. Or a car. This behavior is hard to train out of them, so patience is a much-needed virtue for a Dachshund owner. This breed is not an ideal breed for families with small children. Dachshunds are possessive of their toys, space, and people and have been known to bite kids. Older kids are fine, as long as they know how to properly handle the dog. Dachshunds should never be left unattended in a yard. They were originally used for digging den animals out of the ground, and their instinct to dig is still strong. Though tiny, they can make fast work of flower beds and have been known to dig under fences in search of new adventures.

Smooth Dachshunds do not require much grooming at all. They are generally free from “doggie odor” and unless they have gotten into the mud, don't need bathed very often. Wiping a Smooth Dachshund down with a wet wipe or a damp washcloth can keep him looking shiny between baths. Smooth Dachshunds shed, but not too much, so a once-per-week brushing will suffice. Wirehaired Dachshunds, on the other hand, require regular brushing in order to keep their coats free from mats and debris, and require more frequent bathing than their smooth-coated cousins. Two to three times per year, a Wirehaired Dachshund's coat needs to be stripped, which basically involves pulling the dead hair out of the dog's body. It sounds barbaric, but a groomer can show you how to do it in a manner that will not hurt the dog. Longhaired Dachshunds require regular bathing, and must be blow-dried in order to look their best. Daily brushing is required to keep the hair free of mats and debris. Dachshund's ears can be prone to infection, so regular ear cleaning should be part of all grooming regimens.