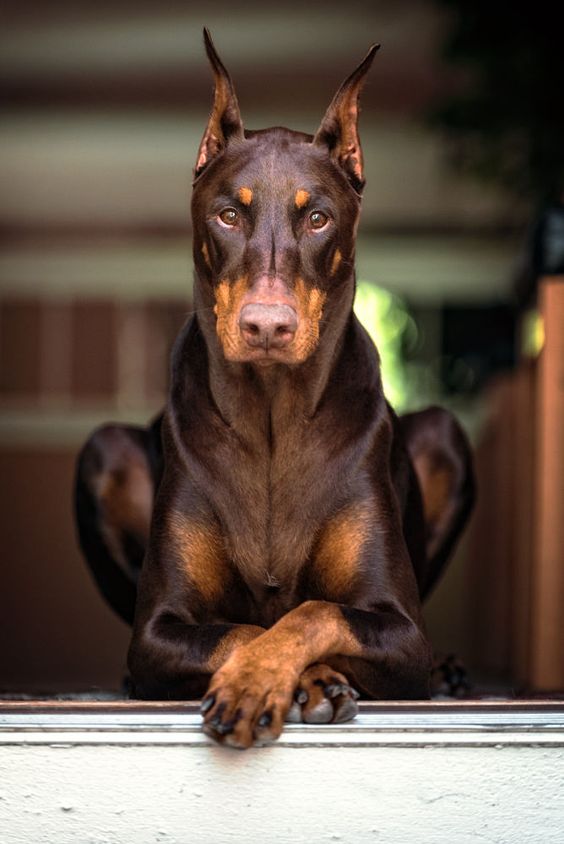 Dobermans were first bred in the town of Apolda, in the German state of Thuringia around 1890, following the Franco-Prussian War by Karl Friedrich Louis Dobermann. Dobermann served in the dangerous role of local tax collector and ran the Apolda dog pound. With access to dogs of many breeds, he aimed to create a breed that would be ideal for protecting him during his collections, which took him through many bandit-infested areas. He set out to breed a new type of dog that, in his opinion, would be the perfect combination of strength, speed, endurance, loyalty, intelligence and ferocity. Later, Otto Goeller and Philip Greunig continued to develop the breed to become the dog that is seen today.

The breed is believed to have been created from several different breeds of dogs that had the characteristics that Dobermann was looking for. The exact ratios of mixing, and even the exact breeds that were used, remain uncertain to this day, although many experts believe that the Dobermann Pinscher is a combination of several breeds including the Beauceron, German Pinscher, Rottweiler and Weimaraner. The single exception is the documented crossing with the Greyhound and Manchester Terrier. It is also widely believed that the old German Shepherd gene pool was the single largest contributor to the Dobermann breed. Philip Greunig's The Dobermann Pinscher (1939), is considered the foremost study of the development of the breed by one of its most ardent students. Greunig's study describes the breed's early development by Otto Goeller, whose hand allowed the Dobermann to become the dog we recognize today. The American Kennel Club believes the breeds utilized to develop the Dobermann Pinscher may have included the old shorthaired shepherd, Rottweiler, Black and Tan Terrier and the German Pinscher.

After Dobermann's death in 1894, the Germans named the breed Dobermann-pinscher in his honor, but a half century later dropped the word 'pinscher' on the grounds that this German word for 'terrier' was no longer appropriate. The British did the same a few years later; now the US and Canada are the only countries who continue to use Pinscher and have dropped an "n" from Dobermann's surname. During World War II, the United States Marine Corps adopted the Doberman Pinscher as its official war dog, although the Corps did not exclusively use this breed in the role.

In the United States, the American Kennel Club ranked the Doberman Pinscher as the 12th most popular dog breed in 2012 and 2013.

The appearance is that of a dog of medium size, with a body that is square. Compactly built, muscular and powerful, for great endurance and speed. Elegant in appearance, of proud carriage, reflecting great nobility and temperament. Energetic, watchful, determined, alert, fearless, loyal and obedient.

They may suffer from a number of health concerns. Common serious health problems include dilated cardiomyopathy, cervical vertebral instability (CVI), von Willebrand's disease (a bleeding disorder for which genetic testing has been available since 2000; the test enables both parents of a prospective litter to be tested for the carrier gene, thus preventing inheritance of the disease), and prostatic disease. Less serious common health concerns include hypothyroidism and hip dysplasia. Canine compulsive disorder is also common. Studies have shown that the Doberman Pinscher suffers from prostatic diseases, (such as bacterial prostatiti, prostatic cysts, prostatic adenocarcinoma, and benign hyperplasia) more than any other breed.

Dilated cardiomyopathy is a major cause of death in Dobermanns. This disease affects Dobermanns more than any other breed. Nearly 40% of DCM diagnoses are for Dobermann Pinschers, followed by German Shepherds at 13%. Research has shown that the breed is affected by an attenuated wavy fiber type of DCM that affects many other breeds, as well as an additional, fatty infiltration-degenerative type that appears to be specific to Dobermann Pinscher and Boxer breeds. This serious disease is likely to be fatal in most Dobermanns affected.

Across multiple studies, more than half of the Dobermanns studied develop the condition. Roughly a quarter of Dobermann Pinschers who developed cardiomyopathy died suddenly from unknown causes, and an additional fifty percent died of congestive heart failure. In addition to being more prevalent, this disease is also more serious in Doberman Pinschers. Following diagnosis, the average non-Dobermann has an expected survival time of 8 months; for Dobermann Pinschers, the expected survival time is less than 2 months. Although the causes for the disease are largely unknown, there is evidence that it is a familial disease inherited as an autosomal dominant trait. Investigation into the genetic causes of canine DCM may lead to therapeutic and breeding practices to limit its impact.

Individual personalities of Doberman Pinschers are varied. Some are outgoing and friendly, others are shy and reserved. Some are dominant with other dogs and chase cats and small dogs, while others are social butterflies at the dog park and have been known to cuddle up with kittens for long naps. Regardless of the individual, all Dobermans are steadfast and loyal companions, true friends to the people they love. They are fearless in the face of danger and make excellent guard dogs, but contrary to popular opinion, they are not attack dogs. Their method of protection is to keep intruders at bay, pinning them to a wall or corner until backup arrives. Despite their reputation for viciousness, most Pinschers are big softies at heart who love the companionship of people.

Doberman Pinschers are large dogs with high energy levels and require a lot of exercise in order to avoid destructive behavior. Activities should vary, in order to keep them interested, as they are intelligent dogs who bore easily. They enjoy outdoor activity and will be happy to accompany people on walks, runs, hikes or bike rides. They were bred to work alongside people – acting as guard dogs, police dogs, military sentries, medical dogs and as part of search and rescue teams. This desire to work still remains, and they are at their best when learning new tasks. This desire to be at “work” means this breed needs a lot of mental stimulation, as well. Agility competitions are excellent outlets for Pinschers to exercise and use their thinking abilities at the same time. This breed was not designed to be a lazy couch-dweller.

Indiscriminate breeding over the years has led to variable levels of trainability in Doberman Pinschers. Some take to training well and pick up new tasks easily and amiably, while others are stubborn and hard-headed. Regardless of the individual, all Doberman Pinschers should be trained with consistency, strong leadership and a firm, but gentle manner. They will shut down if treated harshly. Once leadership is established, most Dobes take well to advanced training. Their desire to work alongside people, their ability to take direction well, and their menacing figure is what has made them excellent police dogs for many years.

Over breeding has wreaked havoc on Doberman Pinsher's bloodlines. Potential owners should research any breeder they are considering adopting from, as many lines have become neurotic. You can often find Doberman Pinschers chasing their tails in their cages, barking uncontrollably and suffering from severe anxiety. If adopting from a Pinscher Rescue, it is important to know the dog's history or neurosis before bringing him home. Because they love to work alongside people so much, Dobes are prone to separation anxiety which can be made worse if they don't get enough activity. Their anxiety usually manifests itself in the form of bakring and destructive chewing. Dobes should never be tied up alone, outside. People who work long hours should not adopt a Doberman. Socialization is important when raising a Doberman Pinscher. They are naturally protective of their home and people, but this can get out of hand if left unchecked. They should be taught that guests are welcome and that other dogs are not intruders to be chased away.

Dobies are low-maintenance when it comes to grooming. They are clean dogs, who do not emit a strong dog odor. Despite their short hair, Doberman Pinschers shed year-round. Brushing the dog at least once per week is sufficient to keep loose hair under control. They do not require frequent bathing, and most owners get by with only a three or four baths per year. While grooming, it is important to check the dog's ears for signs of wax buildup or infection. Clean the ears with a cotton ball and a veterinarian-approved cleanser – never use a cotton swab on a dog's ears. Weekly or even daily brushing of the teeth will keep tartar and bad breath at bay. Additionally, monthly nail clippings may be in order if the dog does not wear down his nails naturally outdoors.