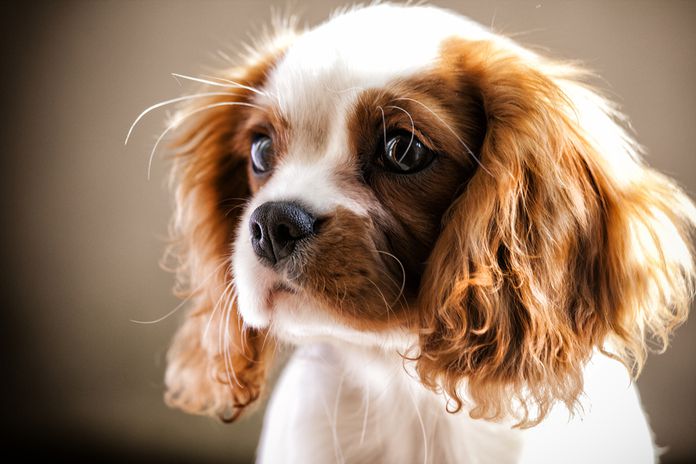 It is thought that the toy spaniels that eventually became the King Charles Spaniel originated in the Far East, primarily Japan. They may share a common ancestry with the Pekingese and Japanese Chin. Toy spaniels were given as gifts to European royalty.

In the 17th century, toy spaniels began to feature in paintings by Dutch artists such as Caspar Netscher and Peter Paul Rubens. Spanish artists, including Juan de Valdés Leal and Diego Velázquez, also depicted them; in the Spanish works, the dogs were tricolour, black and white or entirely white. French naturalist Georges-Louis Leclerc, Comte de Buffon would later describe these types of dogs as crosses between spaniels and Pugs.

Toy spaniels continued to be popular in the British court during the reign of King James II, through that of Queen Anne. Popular types included those of the white and red variety. Following the Glorious Revolution in 1688 and the reign of King William III and Queen Mary II, the Pug was introduced into Britain which would eventually lead to drastic physical changes to the King Charles Spaniel. Comparisons between needlework pictures of English toy spaniels and the continental variety show that changes had already begun to take place in the English types by 1736, with a shorter nose being featured and the breed overall moving away from the one seen in earlier works by Anthony van Dyck during the 17th century.

The varieties of toy spaniel were occasionally used in hunting, as the Sportsman's Repository reported in 1830 of the Blenheim Spaniel: "Twenty years ago, His Grace the Duke of Marlborough was reputed to possess the smallest and best breed of cockers in Britain; they were invariably red–and–white, with very long ears, short noses, and black eyes." During this period, the term "cocker" was not used to describe a Cocker Spaniel, but rather a type of small spaniel used to hunt woodcock. The Duke's residence, Blenheim Palace, gave its name to the Blenheim Spaniel. The Sportsman's Repository explains that toy spaniels are able to hunt, albeit not for a full day or in difficult terrain: "The very delicate and small, or 'carpet spaniels,' have exquisite nose, and will hunt truly and pleasantly, but are neither fit for a long day or thorny covert." This idea was supported by Vero Shaw in his 1881 work The Illustrated Book of the Dog, and by Thomas Brown in 1829 who wrote, "He is seldom used for field–sports, from his diminutive size, being easily tired, and is too short in the legs to get through swampy ground." During the 19th century, the Maltese was still considered to be a type of spaniel, and thought to be the parent breed of toy spaniels, including both the King Charles and Blenheim varieties.

In 1903, the Kennel Club attempted to amalgamate the King James (black and tan), Prince Charles (tricolour), Blenheim and Ruby spaniels into a single breed called the Toy Spaniel. The Toy Spaniel Club, which oversaw those separate breeds, strongly objected, and the argument was only resolved following the intervention of King Edward VII, who made it clear that he preferred the name "King Charles Spaniel". In 1904, the American Kennel Club followed suit, combining the four breeds into a single breed known as the English Toy Spaniel. The Japanese Spaniel was also considered a type of toy spaniel, but was not merged into the new breed and was recognised as a breed in its own right.

The English Toy Spaniel is a compact, cobby and essentially square toy dog possessed of a short-nosed, domed head, a merry and affectionate demeanor and a silky, flowing coat. His compact, sturdy body and charming temperament, together with his rounded head, lustrous dark eye, and well cushioned face, proclaim him a dog of distinction and character. The important characteristics of the breed are exemplified by the head.

The eye problems associated with the King Charles Spaniel include cataracts, corneal dystrophy, distichia, entropion, microphthalmia, optic disc drusen, and keratitis. Compared to other breeds, the King Charles Spaniel has an increased risk of distichia (where extra eyelashes or hairs cause irritation to the eye). Inheritance is suspected in the other conditions, with ages of onset ranging from six months for cataracts to two to five years for corneal dystrophy.

Heart conditions related to the King Charles Spaniel include mitral valve disease, in which the mitral valve degrades, causing blood to flow backwards through the chambers of the heart and eventually leading to congestive heart failure. Patent ductus arteriosus, where blood is channelled back from the heart into the lungs, is also seen and can lead to heart failure. Both of these conditions present with similar symptoms and are inheritable. The OFA conducted a survey on cardiac disease, where of 105 breeds, the King Charles Spaniel was found to be 7th worst, with 2.1% of 189 dogs affected.

Being a brachycephalic breed, King Charles Spaniels can be sensitive to anesthesia. This is because in brachycephalic dogs, there is additional tissue in the throat directly behind the mouth and nasal cavity, known as the pharynx, and anesthesia acts as a muscle relaxant causing this tissue to obstruct the dogs' narrow airways. These narrow airways can decrease the dogs' ability to exercise properly and increase their susceptibility to heat stroke. Other congenital and hereditary disorders found in the King Charles Spaniel are hanging tongue, where a neurological defect prevents the tongue from retracting into the mouth; diabetes mellitus, which may be associated with cataracts; cleft palate and umbilical hernia. The English Toy Spaniel Club of America recommends that umbilical hernias be corrected only if other surgery is required, due to the risk of surgery in brachycephalic breeds. In another study conducted by the OFA, the King Charles Spaniel was the 38th worst of 99 breeds for patella luxation; of 75 animals tested, 4% were found to have the ailment. However, surveys conducted by the Finnish breed club between 1988 and 2007 found that the occurrences were higher in some years, ranging from 5.3% to 50%. There are several breed traits which may cause concern as health issues. They include skull issues such as an open fontanelle, where in young dogs there is a soft spot in the skull; it is common in dogs under a year old. A complication from that condition is hydrocephalus, also known as water on the brain. This condition may cause neurological symptoms that require the dog to be euthanised. Fused toes, where two or more of the dog's toes are fused together, may seem to be a health issue but this breed trait is not a cause for concern.

The English Toy Spaniel is one of the most easy-going and amiable of all Toy breeds. They are known for their cheerful, playful dispositions and love of lounging on laps. They are discriminating about who they choose to adore. However, once they make up their minds, they are passionately affectionate. To be chosen by a Charlie is a life-long, extremely rewarding experience. Charlies make wonderful family dogs, as long as they are raised properly. They are naturally well-behaved, quiet for a Toy breed and not overly demanding. They can be shy with strangers but are boisterous with immediate family members. English Toys love their people, but they also are fairly independent and need plenty of alone time. They are fairly fragile and do not appreciate rough handling. Charlies will snap or bite if they are uncomfortable, frightened, threatened or mistreated. They certainly are not mean, and they don’t make good guard dogs. However, they do make great companions for the elderly and for city-dwellers, especially since they are not an especially barky breed. They can become overwhelmed in chaotic households, especially ones with young, unsupervised children. English Toy Spaniels usually get along well with other dogs, if they are properly introduced. They are willing to please, but can be a bit stubborn.

English Toy Spaniels make great apartment dogs. They are lazy by nature and only need a bit of exercise to stay healthy and content. A daily walk around the block or a romp in a well-fenced yard usually is enough exercise for a Charlie. They still need to be socialized with strangers and given time to play with other dogs. Charlies normally prefer the company of people over that of other animals. However, they are not naturally aggressive and, with proper supervision and training, will play well with others. Because their soft wavy coats are prone to matting, Charlies do best playing on grass in areas that are free from mud, sticks and other debris. Toy Spaniels are not known as fans of water, but some do enjoy a quick swim in warm weather.

English Toy Spaniels are bred and born to please. However, because they have a hard time focusing on specific tasks for any prolonged period of time, they can be a bit difficult to train. English Toys enjoy eating, so training them with a combination of tasty rewards and consistent positive reinforcement works best. These are extremely intelligent animals. When they learn a trick or task, they usually remember it for life, as long as the command is frequently reinforced. English Toy Spaniels do not respond well to physical punishment, loud voices or other forms of negative reinforcement. Use of harsh training techniques will damage the trust that is essential to a healthy relationship between dog and owner.

English Toy Spaniels have almost no bark and little, if any, bite. When confronted, they are more likely to cower than stand and fight. These are not guard dogs. They can be good watch dogs, because they will use their voice to announce the arrival of guests at the front door. Most of the time, however, they are quiet. English Toys give energetic, enthusiastic greetings to their owners, expressing their boundless delight at welcoming “their people” home. These are lap dogs. They prefer to sleep in bed with their owners and do not do well in crates. They love to eat and can become fat if overfed. This breed is predisposed to developing separation anxiety if isolated from their people for long periods of time. Because of their portability and relative quietness, they make terrific traveling companions. Charlies aren’t the best dogs for households with young children, because they can become nippy when irritated by unsupervised kids. Children can hurt Toy Spaniels, and even kill them, by squeezing them or falling on top of them. Charlies can be very clownish and entertaining. They have just enough of the spaniel hunting instinct to get themselves into trouble, and so should never be off-leash unless they are in a safely fenced area.

The English Toy Spaniel requires a lot of grooming. The long hair on its face, ears and hind legs is primed to accumulate food, feces, mud and other debris. Without regular brushing, the coat of this breed will mat, which can contribute to skin infections, hair loss (alopecia) and other unpleasant complications. It is especially important to keep the Charlie’s hair groomed behind the ears, behind the elbows and between the back legs. Picking hair away from the mats carefully and gently will preserve the coat. Charlies should be bathed once or twice a month, with a gentle shampoo and conditioner that will keep their coats soft. Brushing and combing of this breed is done not to prevent accumulation of shed hair, but instead to keep mats and tangles under control. English Toy Spaniels are prone to get really messy faces after they eat. They may need a good wipe-down after meals. They also often need their eyes wiped with a damp sponge, to remove accumulated debris. Their ears should be checked regularly for signs of waxy buildup or infection. Weekly brushing of the teeth is helpful to keep tartar from building up and to minimize gingivitis. Monthly nail clippings are in order if the dog does not wear its nails down naturally.