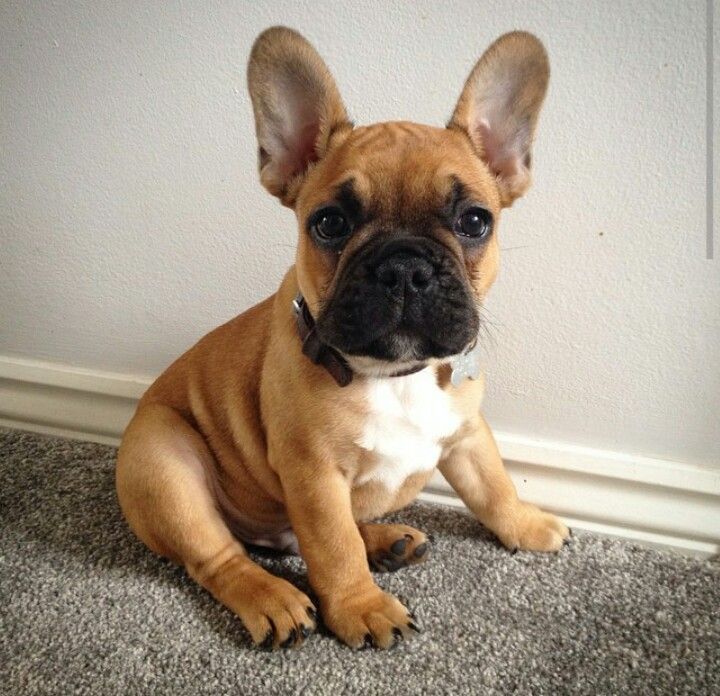 The origin of the modern French Bulldog breed descends directly from the dogs of the Molossians, an ancient Greek tribe. The dogs were spread throughout the ancient world by Phoenician traders. British Molossian dogs were developed into the Mastiff. A sub-family of the Mastiff were the Bullenbeisser, a type of dog used for bull-baiting.

Blood sports such as bull-baiting were outlawed in England in 1835, leaving these "Bulldogs" unemployed. However, they had been bred for non-sporting reasons since at least 1800, and so their use changed from a sporting breed to a companion breed. To reduce their size, some Bulldogs were crossed with terriers, while others were crossed with pugs. By 1850 the Toy Bulldog had become common in England, and appeared in conformation shows when they began around 1860.

At the same time, lace workers from Nottingham, displaced by the Industrial Revolution, began to settle in Normandy, France. They brought a variety of dogs with them, including Miniature Bulldogs. The dogs became popular in France and a trade in imported small Bulldogs was created, with breeders in England sending over Bulldogs that they considered to be too small, or with faults such as ears that stood up. By 1860, there were few Miniature Bulldogs left in England, such was their popularity in France and due to the exploits of specialist dog exporters.

The small Bulldog type gradually became thought of as a breed, and received a name, the Bouledogue Francais. This Francization of the English name is also a contraction of the words "boule" (ball) and "dogue" (mastiff or molosser). The dogs were highly fashionable and were sought after by society ladies and Parisian prostitutes alike, as well as creatives such as artists, writers, and fashion designers. However, records were not kept of the breed's development as it diverged further away from its original Bulldog roots. As it changed, terrier and Pug stock may have been brought in to develop traits such as the breed's long straight ears, and the roundness of their eyes.

In the early 20th century the breed remained in vogue for high society, with dogs changing hands for up to $3,000 and being owned by members of influential families such as the Rockefellers and the J. P. Morgans. The American Kennel Club recognised the breed quickly after the breed club was formed, and by 1906 the French Bulldog was the fifth most popular dog breed in America. In 2013, the American Kennel Club (AKC) ranked the French Bulldog as the 11th most popular breed in the United States, enjoying a sharp rise in popularity from 54th place a decade before, in 2003. By 2014, they had moved up to become the ninth most popular AKC registered dog breed in the USA.

The French Bulldog has the appearance of an active, intelligent, muscular dog of heavy bone, smooth coat, compactly built, and of medium or small structure. Expression alert, curious, and interested. Any alteration other than removal of dewclaws is considered mutilation and is a disqualification. Proportion and Symmetry - All points are well distributed and bear good relation one to the other; no feature being in such prominence from either excess or lack of quality that the animal appears poorly proportioned.

As a result of the compacted airway and the bulk of the French bulldog, they have an inability to effectively regulate their body temperature. While a regular canine may suffer to some degree from the heat, to a Frenchie it may be lethal. It is imperative that they be protected from temperature extremes at all times, and that they always have access to fresh water and shade. As they are a brachycephalic breed, French Bulldogs are banned by several commercial airlines due to the numbers that have died while in the air. This is because dogs with snub noses find it difficult to breathe when they are hot and stressed out. The cargo space in an aircraft can rise as high as 30 °C (86 °F) when waiting on the runway. Patellar luxation is the dislocation (slipping) of the patella (kneecap). In dogs, the patella is a small bone that shields the front of the stifle joint in its hind legs. This bone is held in place by ligaments. As the knee joint is moved, the patella slides in a groove in the femur. The kneecap may dislocate toward the inside (medial) or outside (lateral) of the leg. This condition may be the result of injury or congenital deformities (present at birth). Patellar luxation can affect either or both legs. Testing is available to predict the presence of patellar luxation in a dog.

French bulldogs can also suffer from an assortment of back, disk and spinal diseases and disorders, most of which are probably related to the fact that they were selectively chosen from the dwarf examples of the bulldog breed. This condition is also referred to as chondrodysplasia. French bulldogs are prone to having congenital hemivertebrae (also called "butterfly vertebrae"), which will show on an x-ray. More advanced technologies such as myelograms, CT scans, or MRIs are used to detect spinal cord compression. Some breeders feel that only dogs that have been x-rayed and checked for spinal anomalies should be bred.

In October 2010, the UK French Bulldog Health Scheme was launched. The scheme consists of three levels, the basic vet check corresponding to the Bronze level, this covers all the Kennel Club Breed Watch points of concern for the breed. The next level, Silver, requires a DNA test for hereditary cataracts, a simple cardiology test, and patella grading. The Gold level requires a hip score and a spine evaluation. The European and UK French Bulldog fanciers and Kennel Clubs are ahead of the Americans and the AKC in moving away from the screw, cork-screw or 'tight' tail (which is an inbreed spinal defect), and returning to the short drop tail which the breed originally had.

French bulldogs have a tendency towards eye issues. Cherry eye, or an everted third eyelid, has been known to occur, although it is more common in English Bulldogs and Pugs. Glaucoma, retinal fold dysplasia, corneal ulcers and juvenile cataracts are also conditions which have been known to afflict French bulldogs. Screening of prospective breeding candidates through the Canine Eye Registration Foundation (CERF) can help eliminate instances of these diseases in offspring. The skin folds under the eyes of the French bulldog should be cleaned regularly and kept dry. Tear stains are common on lighter-colored dogs.

French Bulldogs make one of the best companion dogs in the world. They are small, easy to handle and are generally well behaved around new people and other animals. Frenchies have a reputation for being mischievous and clownish, stealing attention whenever and wherever possible. This little dog adores people and craves constant attention and companionship. They don't need a lot of exercise, but love to chase balls and play (indoors or out) during the day, and at night are more than happy to curl up and relax on the sofa. This breed makes an excellent companion for the elderly, but they can fit in well with families of all sizes and ages. French Bulldogs may have faces only a mother could love, but to know a French Bulldog is to love a French Bulldog.

French Bulldogs need a couple of 15 minutes walks every day to maintain their physique, and a few sessions of playing ball to keep them entertained. Their size and activity requirements make them good apartment dogs, but they are just as happy in a big home or on a farm with lots of wide open space. Frenchies don't care so much about the size of their home, as they do the size of their owners heart. French Bulldogs should not be exercised too hard in the summer months, as they are prone to heatstroke. Swimming pool owners should be alert – this breed can not swim and falling into a pool could be life-threatening to a Frenchie.

French Bulldogs can be a training challenge. They are stubborn and quickly lose interest in repetitive activities. Training should be conducted in short sessions, and the routine should be mixed up to keep the Frenchie's interest. Showering a Frenchie with affection and treats when training is the best way to get results from him. Discipline, punishment and yelling will cause this dog to stop listening all together. House training is a long, drawn out process with a French Bulldog. It can take six months to fully train them, and many breeders recommend crating a Frenchies for that period of time.

French Bulldogs are people dogs and don't like to be left alone for long periods of time. People who work long hours should not commit to a French Bulldog, as they can easily develop separation anxiety. This usually means uncontrolled barking while alone, which can alienate neighbors in close quarters. Frenchies snort, snore and grunt 24 hours a day, 7 days a week. They are also prone to flatulence, which can bother some people, but most French Bulldog owners get used to the noises quickly and find them to be an endearing part of the Frenchie personality.

French Bulldogs are easy to groom at home, as they don't require clipping of the coat. Brush weekly to keep the moderately-shedding coat looking shiny and healthy. As a puppy, it is important to handle the Frenchie's feet as often as possible. They don't wear down their toenails naturally, so monthly clippings are a must. If the dog does not like to have his feet handled, this can require trips to the vet's office on a regular basis. They only need to be bathed as needed, and most owners can do this in the kitchen sink or a bathtub, with little fuss from the dog. Brush the dog's teeth several times a week, as Frenchies can develop ripe halitosis. Regular brushing also keeps teeth and gums healthy and can prevent tooth loss later in life. Clean the dog's ears on a regular basis with a damp, warm cloth. Never stick a cotton swab in the dog's ear canal. If his ears are dry, a dab of baby oil rubbed into the edges will help sooth and heal the skin. This remedy can also be applied (sparingly) to a dry nose.