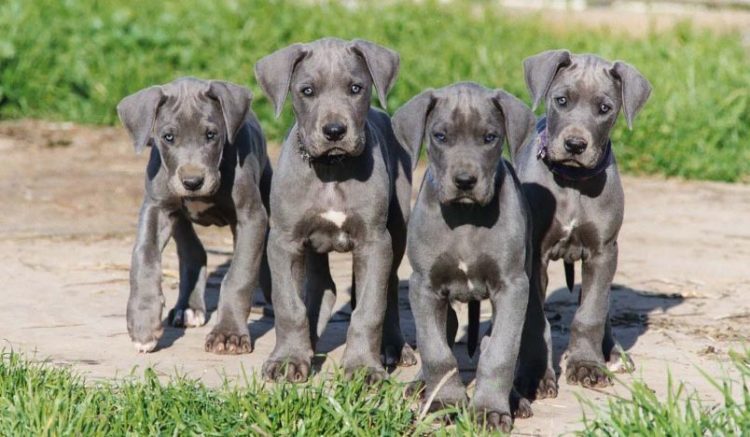 Large boarhounds resembling the Great Dane appear in ancient Greece, in frescoes from Tiryns dating back to the 14th–13th centuries BC. These large boarhounds continue to appear throughout ancient Greece in subsequent centuries up to the Hellenistic era. In Austria and Germany the Molossian hound, Suliot dog, and specific imports from Greece were used in the 18th century to increase the stature of the boarhounds whereas, in Ireland, it was done for the wolfhounds. Bigger dogs are depicted on numerous runestones in Scandinavia, on coinage in Denmark from the fifth century AD, and in the collection of Old Norse poems, known in English as Poetic Edda. The University of Copenhagen Zoological Museum holds at least seven skeletons of very large hunting dogs, dating from the fifth century BC to 1000 AD.

In the middle of the 16th century, the nobility in many countries of Europe imported strong, long-legged dogs from England, which were descended from crossbreeds between English Mastiffs and Irish Wolfhounds. They were dog hybrids in different sizes and phenotypes with no formal breed. These dogs were called Englische Docke or Englische Tocke – later written and spelled: Dogge – or Englischer Hund in Germany. The name simply meant "English dog." Since then, the English word "dog" has come to be associated with a molossoid dog in Germany and France. These dogs were bred in the courts of German nobility, independent of the English methods, since the start of the 17th century.

The dogs were used for hunting bear, boar, and deer at princely courts, with the favorites staying at night in the bedchambers of their lords. These Kammerhunde (chamber dogs) were outfitted with gilded collars, and helped protect the sleeping princes from assassins. While hunting boar or bears, the Englische Dogge was a catch dog used after the other hunting dogs to seize the bear or boar and hold it in place until the huntsman was able to kill it. When the hunting customs changed, particularly because of the use of firearms, many of the involved dog types disappeared. The Englische Dogge became rare, and was kept only as a dog of hobby or luxury.

In the 19th century, the dog was known as a "German boarhound" in English-speaking countries. Some German breeders tried to introduce the names "German Dogge" and "German Mastiff" on the English market, because they believed the breed should be marketed as a dog of luxury and not as a working dog. However, due to the increasing tensions between Germany and other countries, the dog later became referred to as a "Great Dane", after the grand danois in Buffon's Histoire naturelle, générale et particulière in 1755.

The Great Dane combines, in its regal appearance, dignity, strength and elegance with great size and a powerful, well-formed, smoothly muscled body. It is one of the giant working breeds, but is unique in that its general conformation must be so well balanced that it never appears clumsy, and shall move with a long reach and powerful drive. It is always a unit -- the Apollo of dogs. A Great Dane must be spirited, courageous, never timid; always friendly and dependable. This physical and mental combination is the characteristic which gives the Great Dane the majesty possessed by no other breed.

Great Danes, like most giant dogs, have a fairly slow metabolism. This results in less energy and less food consumption per pound of dog than in small breeds. They have some health problems that are common to large breeds, including bloat (gastric dilatation volvulus). To avoid bloat, a rest period of 40 minutes to one hour after meals is recommended before exercise. Their average lifespan is 6 to 8 years; however, some Great Danes have been known to reach 10 years of age or more. Like many larger breeds, Great Danes are at particular risk for hip dysplasia. Dilated cardiomyopathy and many congenital heart diseases are also commonly found in the Great Dane, leading to its nickname: the heartbreak breed, in conjunction with its shorter lifespan. Great Danes also may carry the merle gene, which is part of the genetic makeup that creates the harlequin coloring. The merle gene is an incomplete dominant, meaning only one copy of the gene is needed to show the merle coloring; two merle genes produce excessive white markings and many health issues such as deafness, blindness, or other debilitating ocular issues. Great Danes can also develop wobbler disease, a condition affecting the vertebral column. Since these dogs do grow at a rapid rate, the bones in their vertebae can push up against the spinal cord and cause weakness in the legs. This can be treated with surgery or may heal itself over time.

The Great Dane is an enormous breed that has been cultivated as a distinct type of dog for hundreds of years. Great Danes originated in Germany and perhaps in England (there is no known connection with Denmark), and were bred to hunt the savage European wild boar. This took a powerful, intelligent, tenacious and fearless dog, and the Great Dane’s personality and breed characteristics suited him perfectly to this task. However, size and beauty alone were never enough to make the “Apollo of dogs” a suitable representative of his distinguished breed; he always needed height, weight, courage, nobility, speed and endurance as well. Danes are rarely used as boarhounds today, but instead have transitioned to beloved and affectionate companions and less commonly, estate guard dogs. As such, balance in temperament and physical traits is essential. According to the AKC Official Standard, a Great Dane “must be spirited, courageous, never timid; always friendly and dependable. This physical and mental combination is the characteristic which gives the Great Dane the majesty possessed by no other breed.” While developed as a true working breed, correctly-bred Great Danes make outstanding, affectionate, loving and trusted family companions for spacious households that want a large, short-haired dog that offers some manner of protection due to their sheer size. They tend to be protective by nature only if necessary, but Great Danes should never be encouraged to be overly protective and certainly never to be aggressive. Many people are terrified of large dogs irrespective of their kind temperament. To keep these dogs as gentle ambassadors of this giant breed, Dane owners should always be vigilant and keep their dogs under complete control when in public, and securely contained when at home.

Great Danes can be as energetic as they are large, especially during the teenage period. Young Danes are prone to “the zoomies” – a term used to describe their demonstration of wild abandon and sheer glee that involves galloping, leaping, spinning and jumping on or over objects with an endearing expression of pure joy. This is entertaining to watch, unless a person or prized possession is in their path, which it rarely is but certainly could be. Because of its size, strength and inherently playful nature, even the most well-mannered Great Dane should not be left unsupervised with small children, and all children in the household must be taught the correct way to interact with and respect a dog. Danes are truly house dogs, despite their size, and generally do not require an enormous amount of daily exercise. Indeed, as they are so rapidly-growing, young Great Danes should not be taken jogging or otherwise exercised excessively during the first 1-2 years of life to prevent bone and joint disorders that can be caused by overuse. Danes do not thrive being kept isolated, kenneled or crated for long hours at a time, although they typically do require a securely fenced yard for exercise, elimination and playtime. They usually bond well with all friends and family members and enjoy participating in family activities. Regular walks suit most Great Danes perfectly.

Danes are described as being of average intelligence in the dog world but typically are easy to housebreak and train to standard obedience commands such as sit, stay, down, come and heel. As a breed, they have a strong desire to please. Many Great Danes compete very successfully in obedience, agility, rally and other performance competitions, in addition to being successfully shown in the AKC conformation ring. Early training and socialization of puppies is essential from 3-6 months of age. Dane puppies grow extremely rapidly and within no time will tower over their canine compatriots in puppy kindergarten classes. In its first year of life, a Great Dane will grow as much as a child grows in fourteen or fifteen years. They must be given consistent structure and gentle but firm training to help them become the beloved, devoted and well-adjusted family-members that they are so well-known to be. Dane puppies should not be allowed free run of the house without supervision until they have proven themselves to be trustworthy, as they can easily destroy a couch, chair or carpeting if the mood suits them. Many owners responsibly crate-train their puppies which, when done properly, can help enormously with potty training and prevention of chewing sprees. Many Dane puppies see small animals and human toddlers as peers - similar in size and sound as themselves. Puppies naturally play aggressively, chew on each other, growl and nip as part of learning appropriate canine pack structure and behavior. Owners of Danes need to conscientiously and consistently watch and train their puppies so that they respect all household members and understand their role in the home. Children should not bother a puppy when it is in its safe place or den – which most commonly is its crate.

Anyone considering adding a Great Dane (or any other giant breed) to their family should be especially careful to research the breed and the breeder whose dogs she is considering. Spur-of-the-moment decisions to acquire a Great Dane puppy are too often made by people unprepared to deal with their massive size, rambunctiousness and potentially destructive behavior, especially during adolescence. Reputable breeders will take the time to discuss the temperament of their breed with potential owners in an attempt to prevent their dogs from ending up in shelters or with rescue organizations. Knowledgeable breeders and trainers generally agree that aggressive tendencies or excessive shyness/fearfulness in Great Danes usually are a product of poor breeding, poor training, or both. Potential owners should explore their dog's background and commit to an appropriate training and socialization protocol before making a life-long commitment to this giant dog. Owners of Danes should have a securely fenced yard or enclosure to prevent theft of or escape by their dog. Most Danes are not jumpers by nature; a six-foot fence should be sufficient. Many Great Danes have a fairly high prey-drive and will chase cats, rabbits or other small animals. Danes left alone for hours on end may become barkers, which nearby neighbors tend not to appreciate due to the depth and volume of the Great Dane bark. A Great Dane can provide years of affectionate and loyal companionship. People without the time or dedication to commit to their Great Dane should consider selecting a different breed.

Great Danes, despite their short coat, are heavy shedders. Flyaways can be kept under control through weekly brushing with a firm bristle brush. Bathe a Great Dane as needed. Some owners prefer to use the services of a professional groomer for baths and nail trimmings, as bathing a Great Dane can be a daunting task, especially if the dog is uncooperative. Check the ears regularly for signs of irritation, infection, or wax buildup. Clean the ears with a cotton ball and a veterinarian-approved cleanser. Never use a cotton swab on a dog's ear canal. Brush teeth weekly (or more) to prevent tartar buildup and keep bad breath at bay.