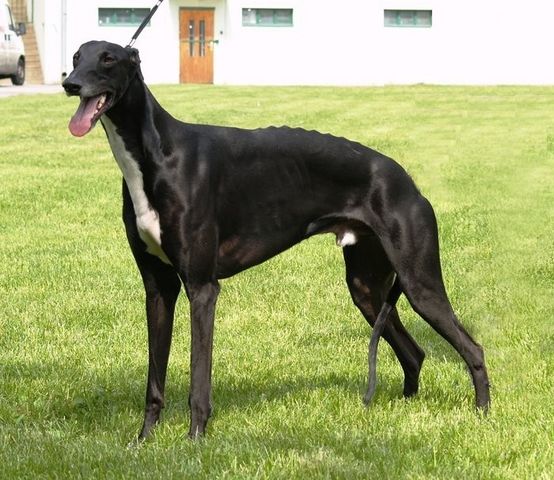 The breed's origin has in popular literature often been romantically connected to Ancient Egypt, in which it is believed "that the breed dates back about 4,000 years;" a belief for which there is no scientific evidence. While similar in appearance to Saluki (Persian Greyhound) or Sloughi (tombs at Beni Hassan c. 2000 BC), analyses of DNA reported in 2004 suggest that the Greyhound may not be closely related to these breeds, but is a close relative of herding dogs. Historical literature on the first sighthound in Europe (Arrian), the vertragus, probable antecedent of the Greyhound, suggests that its origin lies with the ancient Celts from Eastern Europe or Eurasia. Greyhound-type dogs of small, medium, and large size, appear to have been bred across Europe since that time. All modern, pure-bred pedigree Greyhounds derive from the Greyhound stock recorded and registered first in private studbooks in the 18th century, then in public studbooks in the 19th century, which ultimately were registered with coursing, racing, and kennel club authorities of the United Kingdom.

Historically, these sighthounds were used primarily for hunting in the open where their keen eyesight was valuable. It is believed that they (or at least similarly named dogs) were introduced to the British Isles in the 5th and 6th century BC from Celtic mainland Europe, although the Picts and other peoples of the northern British Isles (modern Scotland) were believed to have had large hounds similar to that of the deerhound before the 6th century BC.

The name "Greyhound" is generally believed to come from the Old English grighund. "Hund" is the antecedent of the modern "hound", but the meaning of "grig" is undetermined, other than in reference to dogs in Old English and Old Norse. Its origin does not appear to have any common root with the modern word "grey" for color, and indeed the Greyhound is seen with a wide variety of coat colors. The lighter colors, patch-like markings and white appeared in the breed that was once ordinarily grey in color. The Greyhound is the only dog mentioned by name in the Bible; many versions, including the King James version, name the Greyhound as one of the "four things stately" in the Proverbs. However, some newer biblical translations, including The New International Version, have changed this to strutting rooster, which appears to be an alternative translation of the Hebrew term mothen zarzir. However, the Douay–Rheims Bible translation from the late 4th-century Latin Vulgate into English translates this term as "a cock."

Greyhounds are the essence of the dog breeder’s credo “Form follows function.” From the narrow, aerodynamic skull to the shock-absorbing pads of the feet, Greyhounds are perfectly constructed for high-speed pursuit. The lean beauty of the Greyhound “inverted S” shape, created by the deep chest curving gently into a tightly tucked waist, has been an object of fascination for artists, poets, and kings for as long as human beings have called themselves civilized. Greyhounds are the template from which other coursing hounds have been struck.

Greyhounds are typically a healthy and long-lived breed, and hereditary illness is rare. Some Greyhounds have been known to develop esophageal achalasia, gastric dilatation volvulus (also known as bloat), and osteosarcoma. If exposed to E. coli, they may develop Alabama rot. Because the Greyhound's lean physique makes it ill-suited to sleeping on hard surfaces, owners of both racing and companion Greyhounds generally provide soft bedding; without bedding, Greyhounds are prone to develop painful skin sores. The average lifespan of a Greyhound is 9 to 11 years.

Due to the Greyhound's unique physiology and anatomy, a veterinarian who understands the issues relevant to the breed is generally needed when the dogs need treatment, particularly when anesthesia is required. Greyhounds cannot metabolize barbiturate-based anesthesia in the same way that other breeds can because their livers have lower amounts of oxidative enzymes. Greyhounds demonstrate unusual blood chemistry, which can be misread by veterinarians not familiar with the breed and can result in an incorrect diagnosis.

Greyhounds are very sensitive to insecticides. Many vets do not recommend the use of flea collars or flea spray on Greyhounds if the product is a pyrethrin-based. Products like Advantage, Frontline, Lufenuron, and Amitraz are safe for use on Greyhounds, however, and are very effective in controlling fleas and ticks. Greyhounds have higher levels of red blood cells than other breeds. Since red blood cells carry oxygen to the muscles, this higher level allows the hound to move larger quantities of oxygen faster from the lungs to the muscles. Conversely, Greyhounds have lower levels of platelets than other breeds. Veterinary blood services often use Greyhounds as universal blood donors.

Greyhounds do not have undercoats and thus are less likely to trigger dog allergies in humans (they are sometimes incorrectly referred to as "hypoallergenic"). The lack of an undercoat, coupled with a general lack of body fat, also makes Greyhounds more susceptible to extreme temperatures (both hot and cold); because of this, they must be housed inside. The key to the speed of a Greyhound can be found in its light but muscular build, large heart, highest percentage of fast-twitch muscle of any breed, double suspension gallop, and extreme flexibility of its spine. "Double suspension rotary gallop" describes the fastest running gait of the Greyhound in which all four feet are free from the ground in two phases, contracted and extended, during each full stride.

The Greyhound was developed in Ancient Egypt as a hunter of small animals. Their keen sense of sight could spot tiny animals across great distances, and their speed was unmatched by any other domesticated breed. Today, Greyhounds still maintain their quiet elegance, love to chase and can sprint faster than horses. They make excellent companion dogs as they are quiet, well mannered, independent and clean. Greyhounds are sensitive creatures and should live in a home where there is not a lot of yelling or tension. They startle easily and are sometimes shy, but proper socialization can ensure a well-adjusted Greyhound.

You don't need to be a runner yourself to raise this breed. Greyhounds should be allowed to sprint several times a week, but they are not built for endurance activities. A few sprints and a Greyhound is done for the day, happily retiring to his bed for some rest and relaxation. They are fine city dwellers, as long as they are allowed to get to a park for regular sprints. Other than that, regular walking will keep the Greyhound happy and healthy. Their size makes them unsuitable for small apartments, but they are graceful dogs who don't need excessive room to move around indoors. Taking your Greyhound to the agility track where he can use his mind and body also provides an excellent outlet for exercise. Lure training is the ideal sprinting activity for Greyhounds. If there is a track nearby where you can take your Greyhound to chase a mechanical lure, you should absolutely take your dog for regular visits.

Greyhounds are docile animals who need to be treated gently at all times. They are never aggressive, and freeze up when another dog postures towards them – they have absolutely no fighting instinct whatsoever. Treating a Greyhound harshly can cause them psychological harm, as they are incredibly sensitive. Gentle consistency and lots of praise and treats are all you need to train a Greyhound. Though they are independent, they pick up on tasks fairly quickly. They are naturally well-behaved so training is usually quite easy, even for first time dog owners. Housetraining a Greyhound is a crap shoot. Some take to the yard quickly, while others can struggle for months before they catch on. Patience may be required to get through this stage of development. Early and frequent socialization is very important so that their natural tendency toward shyness does not become all out fearfulness.

Greyhounds have often been compared to cats. They are quiet, well mannered, regal and independent. But their independence can cause problems. They have been known to scale fences to get out and chase other animals, and they aren't likely to return on their own. Fences should be at least six feet high and Greyhounds should always be supervised in the yard. Their chasing instinct is strong. Cats and small dogs an be in peril if your Greyhound's hunting instinct is as strong as his need to chase moving objects. Running should always happen in an enclosed area, and if you take your Greyhound to the dog park, make sure there are separate areas for large and small dogs.

Though they have short hair, Greyhounds shed quite a bit. A hound mitt, used daily, will keep loose hair from becoming too much of a mess around the house. Bathe the Greyhound as needed. Many owners prefer to use dry dog shampoo on this breed. Check the ears regularly for signs of irritation, infection, or wax buildup. Clean the ears with a cotton ball and a veterinarian-approved cleanser. Never use a cotton swab on a dog's ear. Clip the nails monthly if they make noise on hard floors. Greyhounds are prone to dental problems, so it is important that the teeth are brushed several times a week. This will prevent bad breath, keep tartar from building up, and keep gums healthy.