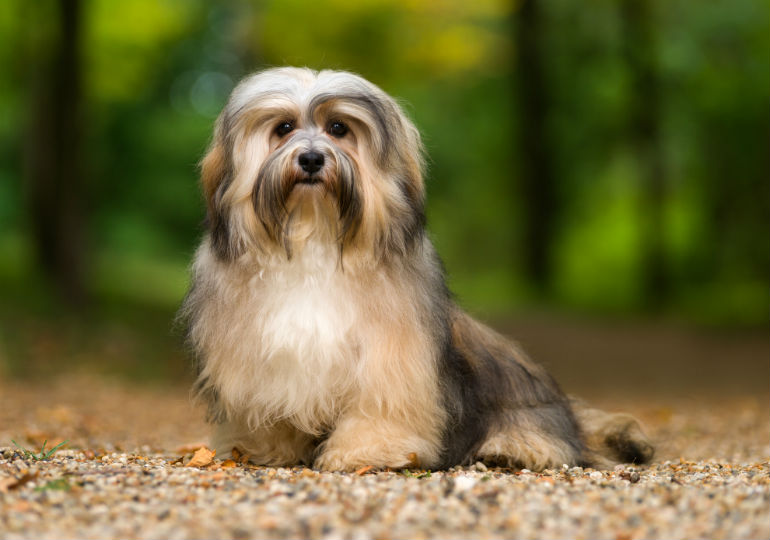 The Havanese is a member of the Bichon family of dogs. The progenitors of the breed are believed to have come from Tenerife. Ship manifests from Tenerife bound for Cuba list dogs as passengers brought aboard, and these dogs were most probably the dog of Tenerife. Some believe the entire Bichon family of dogs can be traced back to the Tenerife dog, while others theorize that the origins are in Malta, citing the writings of Aristotle, and other historical evidence of the early presence of such dogs in Malta. Whatever the actual origins of Bichon dogs, these little dogs soon became devoted companions to the Spanish colonists in Cuba and were highly admired by the nobility.

As part of the Cuban Revolution, upper-class Cubans fled to the United States, but few were able to bring their dogs. When American breeders became interested in this rare and charming dog in the 1970s, the US gene pool was only 11 dogs. The American Kennel Club (AKC) only officially recognized the Havanese breed in 1996. With dedicated breeding, and the acquisition of some new dogs internationally, the Havanese has made a huge comeback and is one of the fastest growing breeds of dogs in the AKC. The 2013 AKC Statistics rank the Havanese as the 25th most popular pure-breed in the United States, a rise in popularity from 28th place in 2012.

The Havanese is a small, sturdy dog of immense charm. The native dog of Cuba, he is beloved as a friendly, intelligent and playful companion. He is slightly longer than tall, with a long, untrimmed, double coat. The Havanese has a short upper arm with moderate shoulder layback and a straight topline that rises slightly from the withers to the croup. The plumed tail is carried arched forward up over the back. The unique springy gait is a result of the breed's structure and playful, spirited personality. These characteristics of temperament, coat, structure and gait are essential to type.

Havanese pack a lot of personality into a tiny little body. They are spunky little dogs who enjoy being the center of attention, but they don't demand it like some other toy breeds. They'll simply do their best to charm and entertain a person in order to get a reaction. Havanese are good with children and are sturdy enough to withstand living with a clumsy toddler. They are easy to train and travel well, and they will want to come with you wherever you go, because they hate to be left alone. They were bred in Cuba to be companion animals and are just as well-suited for empty nesters as they are large families. As long as the Havanese has a loving family to call his own, he'll be a happy dog.

Though they have energy to spare, Havanese don't require too much exercise to maintain an even temperament. A couple of daily walks and time to play, either indoors or outdoors is good enough. This is not an outdoor dog – Havanese are inside dogs and you may have to pick them up to get them to go outdoors. Their size and low activity requirements make them ideal apartment dogs and they are better suited for city life than country living.

Havanese are highly trainable dogs and can often be found performing in the circus. They will do anything for attention, and when training is conducted with positive reinforcement and treats, a Havanese catches on quickly. Harsh discipline will get you nowhere – a Havanese will shut down completely if his trainer yells or pulls. Early and frequent socialization is important. Though Havanese like attention and are generally good around new people, they can sometimes be overly protective and wary of strangers. Teaching them early on that new friends are good can save a lot of eardrums from a Havanese bark. This breed is difficult to house train and requires up to a year of crate training. Some Havanese never quite catch on, so if possible, a doggy door may be necessary.

Barking is a common complaint of Havanese owners. Many report their dog's favorite spot to be a perch where they can look out the window and announce what is happening outside. Early training is important so that your Havanese obeys commands to cease barking. Separation Anxiety is another common problem with Havanese. They are companion dogs who are highly dependent upon the people they love.

The coat of the Havanese may be clipped or kept long. Show dogs must have long hair, but family dogs can be trimmed short for no-fuss grooming. Long-haired Havanese require daily brushing to remove tangles and prevent mats. They also require frequent bathing to keep the coat clean. It's not uncommon for a Havanese to get a weekly bath. Tear stains are common on the face of a Havanese, and the face should be wiped daily with a damp rag. Teeth should be brushed several times per week. Small dogs are prone to dental problems, and regular brushing can help prevent bad teeth later in life. Trim nails monthly and check the ears regularly for signs of wax buildup, irritation or infection. Clean the ear with a cotton ball and a veterinarian-approved cleanser.