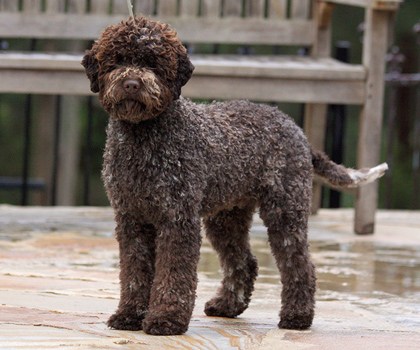 The Lagotto Romagnolo has been selected for the search for truffles on all kinds of ground: it’s the only breed recognized for this purpose. The Lagotto is an ancient breed for water retrieving known in Italy since the 16th century in the lowlands of Comacchio and the marshlands of Ravenna. Over the centuries, the great marshlands were drained and turned into arable land. Since the 19th century this intelligent breed has been utilized as an excellent dog for searching truffles in the flat open country and the hills of Romagna, thanks to his very developed sense of smell and high ability to concentrate on the search.

The Lagotto Romagnolo is a small to medium-sized dog, well proportioned, powerfully built, of a rustic appearance, with a dense, curly coat of woolly texture. The dog should give the impression that he has the strength and endurance to work all day in difficult and challenging terrain.

Some health issues, especially neurological disorders are associated with this breed; however, these are mostly attributable to poor breeding. Genetically testing prior to breeding is necessary to avoid the most common diseases in the breed. Issues include:

Benign Juvenile Epilepsy Look for BJE +/-. You do not want to breed two carriers NO +/+

Lagotto Storage Diseases (LSD) You do not want to breed two carriers.

A new neurodegenerative disorder, called "Neuroaxonal Dystrophy", that was originally identified in Spanish Water Dogs has been identified in the breed in 2016. It is not known yet whether it is related to the disorders already associated with the Lagotto Romagnolo.  Lagotto puppies are crucial in research regarding epilepsy. In July 2011, researchers in Finland reported the discovery of a mutation in a gene called Lgi2 that may be a new candidate gene for human benign childhood epilepsy. Lgi2 is the first gene that can be linked directly to the remission that carriers experience after the age of ten. Lagotto breeders are now using genetic tests to screen for the mutation.

The Lagotto is a working dog. It has a natural gift for searching and its very good nose has made this breed very efficient in searching for truffles. While on the search he is not usually distracted by the scent of wild animals or other dogs. The Lagotto is loyal, keen, affectionate, very attached to his owner and easy to train. It gets on well with other dogs and other pets if sufficiently socialized. It is an excellent family companion and a very good warning dog. The Lagotto is a good pet and loves people, but in addition to needing plenty of exercise, it needs to use its brain. This intelligent dog needs a job to do, something to keep its mind occupied. Tracking, games of searching for people in the woods or searching for mushrooms are some ideas. Obedience is also something they like and are good at, and agility is a favorite! If you’re not interested in competition, you can always play hide-and-seek at home. As long as you let the dog use its brain, it won't have to find things to do on its own (that’s never anything good!) In Sweden the breed is very popular. For some this breed is perfect because of its allergy friendly, non-shedding coat, its medium size, its happy disposition, its intelligence and its willingness to work. Make sure you are this dog's firm, but calm, consistent pack leader. Proper human to canine communication is essential to ensure it gets along with other dogs and listens to human commands.

Lagottos are born to work hard and require rigorous, daily exercise. They make excellent hiking and jogging partners. Lagottos also love to swim and often take to the water naturally given the opportunity. It is also important to remember that as a working breed, Lagottos require a “meaningful” and mentally stimulating task that they can engage in each day to live happy and fulfilled lives. This can be something as simple as a game of fetch or a session of hide and seek.

The Lagotto Romagnolo is a very loving dog that is devoted to its owner. They are also extremely affectionate and gentle with children and make excellent family pets. Lagottos have excellent eyesight and are extremely alert. They will quickly alert their owners to any intrusions into the family property and often make excellent guard dogs. Lagottos get along fairly well with other dogs and pets, provided that they are socialized from an early age. They do have fairly strong hunting instincts, especially when it comes to birds and fowl, so owners might want to walk their Lagottos on a leash. Lagottos are an extremely intelligent breed and were bred as a working dog. Therefore they require a great deal of mental stimulation to lead a happy and balanced life. They also love to dig and owners should ideally provide their Lagottos with a sandbox or designated digging area where they can indulge in this tendency.

It's dense, curly coat needs regular care. When you buy a Lagotto you hear different stories from different people about how to care for the coat. Some say that you should only clip it down with clippers twice a year and nothing else. Some say you have to brush it sometimes. One owner says, "Well, I have learned the hard way that it is more difficult that it seems. The coat easily gets matted, and to prevent that, you have to comb through it on a regular basis." You should not show a brushed Lagotto (like a Poodle) in show ring. It’s not a fur ball, it’s a working dog, and should be showed that way. This breed sheds little to no hair.