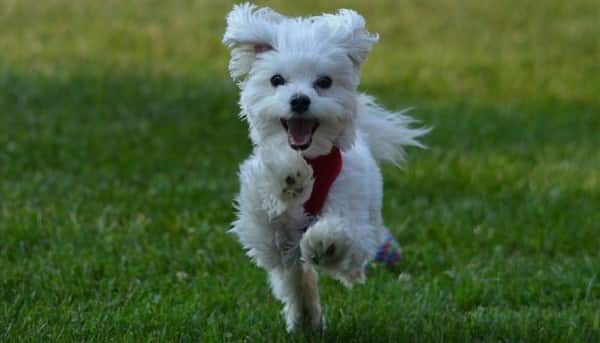 This ancient breed has been known by a variety of names throughout the centuries. Originally called the "Canis Melitaeus" in Latin, it has also been known in English as the "ancient dog of Malta," the "Roman Ladies' Dog," the "Maltese Lion Dog," and "Melita" (the former name of Malta). The origin of the common name "Cokie" is unknown, but is believed to have originated in the mid-1960s on the U.S. East Coast and spread in popular use. This breed has been referred to falsely as the "Bichon", a name that refers to the family ("small long-haired dog") and not the breed. The Kennel Club officially settled on the name "Maltese" for the breed in the 19th century.

The Maltese is thought to have been descended from a Spitz-type dog found among the Swiss Lake Dwellers and was selectively bred to attain its small size. There is also some evidence that the breed originated in Asia and is related to the Tibetan Terrier; however, the exact origin is unknown. The dogs probably made their way to Europe through the Middle East with the migration of nomadic tribes. Some writers believe these proto-Maltese were used for rodent control before the appearance of the breed gained paramount importance.

The oldest record of this breed was found on a Greek amphora found in the Etruscan town of Vulci, in which a Maltese-like dog is portrayed along with the word Μελιταιε (Melitaie). Archaeologists date this ancient Athenian product to the decades around 500 BC. References to the dog can also be found in Ancient Greek and Roman literature. Aristotle was the first to mention its name Melitaei Catelli, when he compares the dog to a mustelid, around 370 BC. The first written document (supported by Stephanus of Byzantium) describing the small Canis Melitaeus was given by the Greek writer Callimachus, around 350 BC. Pliny suggests the dog as having taken its name from the Adriatic island Méléda; however, Strabo, in the early first century AD, identifies the breed as originating from the Mediterranean island of Malta, and writes that they were favored by noble women. During the first century, the Roman poet Martial wrote descriptive verses to a small white dog named Issa owned by his friend Publius. It is commonly thought that Issa was a Maltese dog, and various sources link Martial's friend Publius with the Roman Governor Publius of Malta,[26] though others do not identify him.

John Caius, physician to Queen Elizabeth I, also claimed that Callimachus was referring to the island of Melita "in the Sicilian strait" (Malta). This claim is often repeated, especially by English writers. The dog's links to Malta are mentioned in the writings of Abbé Jean Quintin d'Autun, Secretary to the Grand Master of the Knights of Malta Philippe Villiers de L'Isle-Adam, in his work Insulae Melitae Descriptio. Around the 17th and 18th centuries, some breeders decided to "improve" the breed, by making it smaller still. Linnaeus wrote in 1792 that these dogs were about the size of a squirrel. The breed nearly disappeared and was crossbred with other small dogs such as Poodles and miniature Spaniels. In the early 19th century, there were as many as nine different breeds of Maltese dog.

Parti-colour and solid colour dogs were accepted in the show ring from 1902 until 1913 in England, and as late as 1950 in Victoria, Australia. However, white Maltese were required to be pure white. Coloured Maltese could be obtained from the south of France.

The Maltese is a toy dog covered from head to foot with a mantle of long, silky, white hair. He is gentle-mannered and affectionate, eager and sprightly in action, and, despite his size, possessed of the vigor needed for the satisfactory companion.

Potential hereditary defects and disorders commonly found, but not necessarily found, in the Maltese are as follows: Endocardiosis; Hydrocephalus; Entropion: The inversion, or the turning inward, of all or part of the edge of an eyelid; Distichiasis; Glaucoma: Serious disorder characterized by fluid build-up inside of the eye; Retinal Detachment: Separation of the inner layers of the retina from its underlying pigmented layers; Progressive Retinal Atrophy: Group of degenerative eye disorders that eventually lead to permanent blindness in both eyes; Open Fontenal; Granulomatous Meningoencephalomyelitis; Glycogen Storage Disease; Cryptorchidism: Cryptorchidism is the physical absence of one or both testicles in the scrotum of a dog; Cleft Palate: Birth defect caused by incomplete fusing of the two halves of the palate during neonatal development; Hypoglycemia; Patellar Luxation: Commonly known as a “slipped knee cap,” occurs when the patella is displaced from the joint; Patent Ductus Arteriosus: Abnormal connections between different chambers of the heart, or between heart vessels; Portosystemic Shunts; Pyloric Stenosis; Reverse Sneezing; Deafness: Defined as the lack or loss, complete or partial, of the sense of hearing; Collapsing Trachea; White Shaker Dog Syndrome; Dental Problems: Diseases and disorders affecting the dog's mouth.

According to the AKC standard, “for all his diminutive size, the Maltese seems to be without fear. His trust and affectionate responsiveness are very appealing. He is among the gentlest mannered of all little dogs, yet he is lively and playful as well as vigorous.” The Maltese has been around since Medieval Times, and has been a companion dog from the very beginning. Whereas other small breeds are often the result of breeding larger dogs down to size, the Maltese started off as small as they are today. They are sturdy little dogs, however, who love to play hard and can keep up with dogs twice their size. It is the Maltese nature to be sweet, playful and easygoing, but their individual temperaments can be altered by how they are raised. While you may be inclined to treat a Maltese as if he were a helpless baby, it is important to let these dogs have some independence. Sheltering them, spoiling them or not training them to be well mannered can lead to bratty behavior. Treating your Maltese like an independent being and setting proper boundaries can help ensure that he's as “gentle mannered” and “playful” as the AKC suggests.

Maltese don't need a lot of vigorous exercise in order be happy and healthy, but daily walks are a must. These little guys love to run, so allowing them time to zip around the yard or park can help them expend extra energy. Their size makes them ideal apartment dogs, but a commitment should be made to walking your Maltese daily as it keeps them in shape and helps prevent separation anxiety.

Give these little guys some praise and treats and they are capable of anything. Maltese are highly trainable and unlike other toy breeds, possess a desire to please. Some can have an independent streak, but that can generally be overcome by keeping training interesting and mixing up the routine a bit. Once your Maltese realizes there are treats in the deal, he'll perk up and catch on quickly. Toy breeds should never be treated harshly or given physical corrections. Small dogs feel their only method of protecting themselves is through their bark and bite, and they don't hesitate to use either. Harsh treatment or physical discipline can cause your Maltese to be mistrustful of people in general. Rewarding good behavior and ignoring bad is the best method to train a Maltese. Housetraining a Maltese can be a long, drawn out process. Finding where these tiny dogs have gone on your carpet can be a challenge, especially because they are so small and can hide quite easily. Crating your Maltese may be necessary for six to eight months. Some owners request the breeder housetrain their dog before bringing him home.

Separation Anxiety is quite common in Maltese. They adore people and hate to be left alone for long periods of time. Most Maltese don't get enough exercise, as owners of toy breeds think they don't need to walk their dogs. Exercise definitely helps, but Maltese are best suited for homes where there is a stay at home parent, or in the home of retirees.

The coat of the Maltese sheds very little, if at all. A Long-haired Maltese will need to be brushed daily in order to prevent tangles and mats. If the dog does develop a mat, do not bathe him. Make sure all mats are worked out before bathing, as water will tighten the hair of the Maltese and make the situation much worse. Brushing the Maltese also helps keep him clean, so even a short haired dog should be brushed regularly. Maltese get dirty very easily and regular brushing can mean the difference between bathing the dog every week, or every two to three weeks.

Tear stains are a common problem, thanks to the white hair of the Maltese. Rub the face with a soft cloth and gentle, veterinarian-approved cleanser to keep stains to a minimum. Additionally, their faces can become stained from food and water. Wipe the dog's face after every meal, and dry his beard after he drinks. Some owners prefer to teach their Maltese to drink from a water bottle, to prevent face staining.

Check the Maltese's ears on a regular basis for signs of wax buildup, irritation or infection. Clean the ears with a cotton ball and a veterinarian-approved cleanser; never use a cotton swab in a dog's ear canal. Also, Maltese grow a lot of hair in their ears that needs to be removed. Ask your groomer or vet to do this or to show you how to pluck the hair at home. Teeth should be brushed on a weekly basis to prevent tartar buildup, promote gum health and keep bad breath at bay. Trim nails monthly if the dog does not wear the toenails down naturally outdoors.