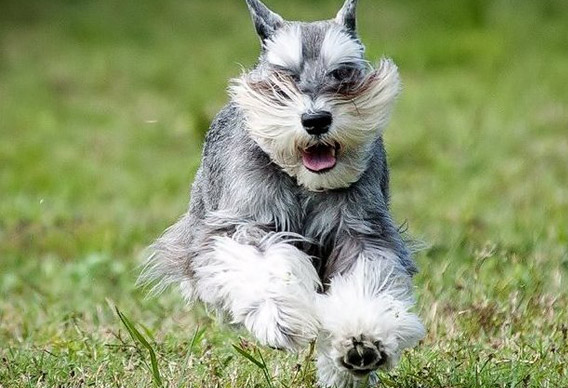 The Miniature Schnauzer is a robust, active dog of terrier type, resembling his larger cousin, the Standard Schnauzer, in general appearance, and of an alert, active disposition. Faults - Type - Toyishness, ranginess or coarseness.

A UK Kennel Club survey puts the median lifespan of Miniature Schnauzers at a little over 12 years. About 20% lived to >15 years. While generally a healthy breed, Miniature Schnauzers may suffer health problems associated with high fat levels. Such problems include hyperlipidemia, which may increase the possibility of pancreatitis, though either may form independently. Other issues which may affect this breed are diabetes, bladder stones and eye problems. Feeding the dog low- or non-fatty and unsweetened foods may help avoid these problems. Miniature Schnauzers are also prone to comedone syndrome, a condition that produces pus-filled bumps, usually on their backs, which can be treated with a variety of methods. Miniature Schnauzers should have their ears dried after swimming due to a risk of infection, especially those with uncropped ears; ear examinations should be part of the regular annual check up. Miniature Schnauzers are also prone to von Willebrand disease (vWD). vWD in dogs is an inherited bleeding disorder that occurs due to qualitative or quantitative deficiency of von Willebrand factor (vWF), a multimeric protein that is required for platelet adhesion.

Miniature Schnauzers pack a lot of personality into a tiny package. Like other terrier breeds, they believe they rule the roost and soak up as much attention as they can possibly get. They are sturdy little balls of spunk who love nothing more than to run and play outside with the people they love. Miniature Schnauzers are clowns who enjoy making mischief. They are incredibly smart and will use that intelligence to do things like open cabinets or closets to get at food, toys, or your favorite pair of shoes. They get along fine with other household pets – they may give chase to your family cat, but he's not a danger to other pets, rather, he'll chase Fluffy for his own amusement. Miniature Schnauzers make a great pet for active families, and are an excellent choice for first time dog owners.

Miniature Schnauzers are versatile dogs who can live in the city or the country. They need daily walks and time to run every week, but they can be just as happy living in an apartment as a farm. The Schnauzer's yard should always be fenced in because these terriers will take off like a shot if they catch a glimpse of a cat, rabbit, bird or squirrel. Their need to chase and dig can be channeled productively by enrolling your Miniature Schnauzer in earthdog activities, where they are able to track rodents and dig for them. The rodents are hidden below ground in safe enclosures, so it is a safe activity. They also enjoy and excel in agility training. These activities can keep you Schnauzer's mind and body active, and he will love the bonding time spend with his favorite people.

Schnauzers are highly trainable as they are intelligent and eager to use their minds. They are very independent and stubborn, however, so training can be a challenge and should never be done by the softie in the house. Schnauzers don't like being told what to do and want to be in charge at all times. Training should be conducted in a calm-assertive manner, and lessons should begin early in puppyhood. They are motivated by food and positive reinforcement, and sessions should be kept short with varied activity, as repetition can bore them. Once leadership is established and basic obedience has been mastered, your Miniature Schnauzer should be graduated on to advanced training which may include agility or tracking.

Miniature Schnauzers are terriers and they exhibit all the classic terrier traits: excessive barking, digging, chasing anything that catches their eye, posturing toward large dogs, suspiciousness toward strangers and believing they are a lot larger than they really are. The key to raising an obedient and well-mannered Schnauzer lies in setting boundaries, socializing him extensively, and maintaining a proper exercise regimen. Barking is a trait that can't be trained out of Miniature Schnauzers. They are alert watchdogs who will sound the alarm early and often that something is approaching. Teaching your Schnauzer to obey commands to stop barking can save your eardrums, as the Mini Schnauzer's bark can be quite shrill. These dogs are not well-suited for homes with small children. While Schnauzers enjoy the company of older kids, toddlers can be too much for them to handle. Toddlers do not understand that dogs have boundaries and can get snapped at or even bitten.

To stay looking handsome, Miniature Schnauzers need to be groomed every five to eight weeks. Many owners prefer to use the services of a professional groomer, as properly clipping a Schnauzer can be tricky. Show dogs need to be hand-stripped, which is a time consuming process, and is unnecessary for dogs who will not be shown. It is important to brush a Schnauzer two to three times per week to prevent mats. The reason this breed doesn't shed is because the undercoat gets caught in the topcoat, so the loose and dead hair must be brushed out, in order to remove it. Wash the dog's beard after mealtime, to remove food, prevent tangles and keep him looking and smelling fresh. Check the Miniature Schnauzer's ears on a regular basis for signs of wax buildup, irritation or infection. Clean the ears with a cotton ball and a veterinarian-approved cleanser; never use a cotton swab in a dog's ear canal. Teeth should be brushed on a weekly basis to prevent tartar buildup, promote gum health and keep bad breath at bay. Trim nails monthly if the dog does not wear the toenails down naturally outdoors.